The Basics of Self-Directed Learning for Teachers 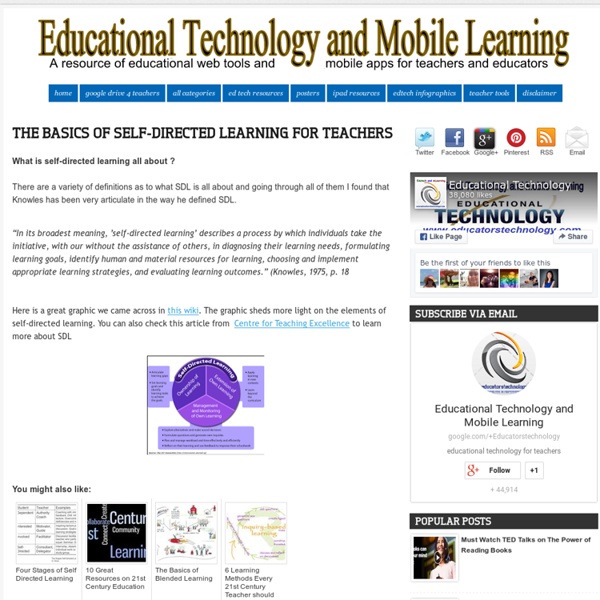 What is self-directed learning all about ? There are a variety of definitions as to what SDL is all about and going through all of them I found that Knowles has been very articulate in the way he defined SDL. “In its broadest meaning, ’self-directed learning’ describes a process by which individuals take the initiative, with our without the assistance of others, in diagnosing their learning needs, formulating learning goals, identify human and material resources for learning, choosing and implement appropriate learning strategies, and evaluating learning outcomes.” (Knowles, 1975, p. 18 Related:  mixmaxmin

U.K. MOOCs Alliance, Futurelearn, Adds British Council To Its Free Higher Education Roster The U.K. MOOCs alliance, Futurelearn, which was announced last December and will be offering its first free courses “from mid-2013″ with the aim of creating a globally accessible British higher education brand, has added another member to its consortium of backers. The British Council is the latest to join the Futurelearn alliance, following the British Library and a further five universities which piled in last month. The total number of institutions now supporting Futurelearn is 19. The British Council, which operates in more than 100 countries and has charitable status, operating under a Royal Charter, has particular experience in running English language courses and in arts and culture-related education. A spokeswoman for Futurelearn commented via email: “The British Council will be working with Futurelearn on a variety of levels including course development, assessment and examinations.

Sugata Mitra: The Sole of a Student Winner Of the TED Prize 2013 In a special edition of TEDWeekends, TED and The Huffington Post are partnering to co-premiere a talk by this year's TED Prize winner. The TEDTalk by the winner is accompanied by an original blog post, along with new op-eds, thoughts and responses from the HuffPost and TED communities. The Sole Of A Student From Plato to Aurobindo, from Vygotsky to Montessori, centuries of educational thinking have vigorously debated a central pedagogical question: How do we spark creativity, curiosity, and wonder in children? But first, a bit of history: to keep the world's military-industrial machine running at the zenith of the British Empire, Victorians assembled an education system to mass-produce workers with identical skills. Like most things designed by the Victorians, it was a robust system. But what got us here, won't get us there. We need a pedagogy free from fear and focused on the magic of children's innate quest for information and understanding. -- Sugata Mitra

Students Speak Up in Class, Silently, via Social Media “When we have class discussions, I don’t really feel the need to speak up or anything,” said one of her students, Justin Lansink, 17. “When you type something down, it’s a lot easier to say what I feel.” With Twitter and other microblogging platforms, teachers from elementary schools to universities are setting up what is known as a “backchannel” in their classes. The real-time digital streams allow students to comment, pose questions (answered either by one another or the teacher) and shed inhibitions about voicing opinions. Nicholas Provenzano, an English teacher at Grosse Pointe South High School, outside Detroit, said that in a class of 30, only about 12 usually carried the conversation, but that eight more might pipe up on a backchannel. Skeptics — and at this stage they far outnumber enthusiasts — fear introducing backchannels into classrooms will distract students and teachers, and lead to off-topic, inappropriate or even bullying remarks. Photo The 11th graders in Mrs. Mrs.

Education innovator wins $1 million TED prize Sugata Mitra and Sir Ken Robinson (TED website) The winner of the first $1 million TED Prize for education innovation is (no, not Sal Khan) Sugata Mitra, for his plan this year to start the “School in the Cloud,” which is essentially a computer lab where children in Indian can learn in a student-driven environment. He has released a toolkit for parents and teachers who want to create what he calls self-organized learning environments, or SOLES, for kids ages 8-12, which you can find here. Here is his wish, taken from the TED Web site: “My wish is to help design the future of learning by supporting children all over the world to tap into their innate sense of wonder and work together. And here is his plan, from the same Web site: According to the TED Web site: Mitra has a history of research to back up this wish. Here’s a video about those experiments:

In Cisco's Classroom Of The Future, Your Professor Is Just An Illusion There were a few strange things about the event I attended in a classroom at the San Francisco branch of the University of Pennsylvania’s Wharton School. Instead of students, the room was filled with Cisco executives, professors, and journalists. There were cameras trained on us from all angles. But most noticeably, the man speaking to us in the front of the room wasn’t really there. Neither were the people sitting in the back of the room. The man was standing in front of a nearly identical classroom at the Wharton School in Philadelphia; the people sitting behind us were there as well. We were at Wharton for a demonstration of the Cisco Connected Classroom, a new way of using Cisco’s telepresence technology to make it possible for one branch of an MBA program to hold classes with another branch across the country in real-time—and even bring in guests from elsewhere. The result is a set-up that’s remarkably smooth and immersive. "We’re already seeing a lot of interest.

TED Prize : For a wish that can inspire the world » Blog Archive » Congratulations Sugata Mitra, Winner of the First-Ever $1M TED Prize! February 26, 2013 After a series of experiments revealed that groups of children can learn almost anything by themselves, researcher Sugata Mitra began his pursuit to inspire children all over the world to get curious and work together. In 1999, Sugata and his colleagues dug a hole in a wall bordering a slum in New Delhi, installed an Internet-connected PC, and left it there (with a hidden camera). Soon, they saw kids from the slum playing with the computer, learning English and searching through a wide variety of websites on science and other topics, and then teaching each other. Sugata and his colleagues carried out experiments for over 13 years on the nature of self-organized learning, its extent, how it works and the role of adults in encouraging it. His innovative and bold efforts towards advancing learning for children earned him the first-ever $1 million dollar TED Prize award. Are you inspired by Sugata’s wish? Here’s what you can do: -Join our TED conversation: Tell us.

Google Search Education Google’s search engine is a powerful and impressive tool for locating information online. Unfortunately for many students, the simplicity of the default search interface can lead to some pretty poor search habits and results. As I wrote in a previous post about Google’s efforts to provide information literacy resources, “it’s often a challenge (in my experience) not only to get students to search using something other than Google; it’s also difficult to teach them how to use Google effectively.” In that previous post, I pointed readers to something Google was calling their “Search Education Evangelism” site, a resource designed to make it easier for instructors to teach information literacy. The new site is called “Google Search Education.” The information hub provides several different lesson plans (with a Creative Commons CC-BY license) for use in the classroom: Each of the lesson plans is available in three levels: beginner, intermediate, and advanced. Return to Top

Evie Hantzopoulos: The Future of Learning: Lessons From a TED Prize Winner Click here to read an original op-ed from the TED speaker who inspired this post and watch the TEDTalk below. We often hear "our schools are broken." But are they in fact, obsolete? That is the bold question TED Prize winner Sugata Mitra will address as he begins his journey to design the School in the Cloud, which will focus on helping students in developing countries that lack teachers, as well as change the way children learn across the globe by shifting the educational paradigm and redefining the role of educators. Mitra states that the current system actually worked quite well in the past, before computers brought information to our fingertips in seconds, and before globalization and technology transformed what types of skills we will need for the future. He believes children can learn from one another, and the role of the teacher should be to ask the big questions, step back and admire, and let learning happen through the use of the Internet and self-directed learning.

Learning In The 21st Century Might Only Require 3 Things by Iain Lancaster, TeachThought Intern Sugata Mitra’s award winning TED Talk about “building a school in the cloud” is more than just a compendium of thought provoking notions regarding the future of education. In the talk, he first contextualizes where education is and how it came to be this way. For those of us in the field it might stir feelings of both eager anticipation and trepidation. In a nutshell, those are our options. 27 Actions That Promote Self-Directed Learning 30 Universal Strategies For Learning by Terry Heick As teachers, we’re all trying to better understand how people learn–not now they’re taught in terms of teaching strategies, but more so learning strategies–only not really strategies. Learning actions, or cognitive actions. Strategies for learning. Self-directed and social learning will undoubtedly be at the core of any sort of future learning–both near and far future. Bloom’s taxonomy–especially the annotated “Bloom’s Wheel”–helpfully offers power verbs that drive the planning of learning activities, but I wanted to be even more specific. In the TeachThought Learning Taxonomy, we approached this idea, and did so again with How To Add Rigor To Anything. Using “Universal Strategies” So how can this help you as an educator? The big idea is that these kinds of “brain actions” are not only the kinds of tasks you can use to create assignments, but more importantly are the kinds of acts that promote inquiry-based understanding. An example?