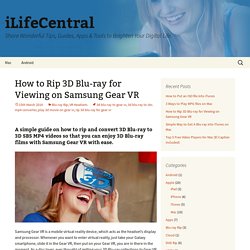 Samsung Gear VR is a mobile virtual reality device, which acts as the headset’s display and processor. Whenever you want to enter virtual reality, just take your Galaxy smartphone, slide it in the Gear VR, then put on your Gear VR, you are in there in the moment. As a disc lover, ever thought of getting your 3D Blu-ray collections to Gear VR for watching, on one hand, instead of going to the cinema, on other hand, to get rid of the trouble with placing them in Blu-ray player and even avoid considering the region codes of commercial BDs? Marvel and Samsung Presents Battle For The Avengers Tower' 360° Video.

Battle For The Avengers Tower’ 360° Video is super cool! 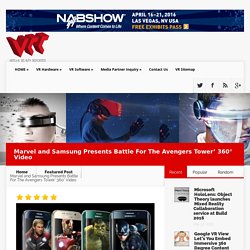 I am a huge Marvel fan. When I was in Middle School, as a nerd, my life was about 3 things: Marvel comic, video games and Chicago Bulls. So, when the block buster movie Avenger 2: Age of Ultron came out, I immediately fell love with it! This video came to me as a pleasant surprise, as it is my personal favorite interactive 360 video on Youtube to date. But regardless if you are a Marvel fan or not, you would enjoy this cool video! Samsung Gear VR is getting 'Minecraft' this spring. Samsung's Gear VR might finally have its killer virtual reality app. 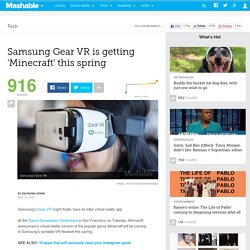 At the Game Developers Conference in San Francisco on Tuesday, Microsoft announced a virtual-reality version of the popular game Minecraft will be coming to Samsung's portable VR headset this spring. The timing is just right. The Oculus Rift version of Minecraft is also slated for release this spring. The key difference, of course, is the Gear VR only costs $99 compared to the $599 Rift. The Gear VR also only needs a compatible Samsung phone (like the new Galaxy S7 and S7 Edge) versus a powerful gaming PC.

Since its release in 2009, Minecraft has become a global phenomenon, attracting players of all ages with its open-world gameplay. Some of the massive creations in Minecraft are simply too impressive for words. Microsoft purchased Minecraft and Mojang, the company behind the game, in 2014 for $2.5 billion. Since then, Hulu lets you watch TV in the living room anywhere with new app for VR headsets. Hulu has launched its first VR app allowing viewers to watch movies in a virtual living room. 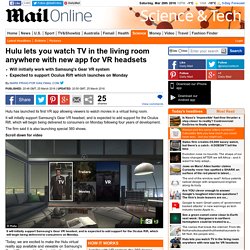 It will initially support Samsung's Gear VR headset, and is expected to add support for the Oculus Rift, which will begin being delivered to consumers on Monday following four years of development. Welcome to AltspaceVR! How Samsung Is Using The World As Its Gear VR Laboratory. Roughly half a year after Samsung released the Innovator Edition of its Gear VR virtual reality headset in December 2014, the company made it obsolete. 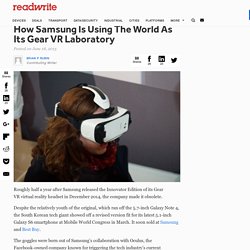 Despite the relatively youth of the original, which ran off the 5.7-inch Galaxy Note 4, the South Korean tech giant showed off a revised version fit for its latest 5.1-inch Galaxy S6 smartphone at Mobile World Congress in March. It soon sold at Samsung and Best Buy. The goggles were born out of Samsung’s collaboration with Oculus, the Facebook-owned company known for triggering the tech industry’s current fascination with virtual reality.

But unlike that predecessor, which connected to computer systems with cables, the Gear VR was self-contained and powered by a phone, which was seated inside the gadget. See also: Samsung’s Galaxy S6 And Galaxy S6 Edge Get Glassy And Curved Smartphone-based VR comes with plenty of pros and cons: On one hand, it’s convenient and less complicated. Here’s what Samsung has in mind. Yeah, I understand. Samsung's Gear VR Web browser has exactly 1 useful function. Why would you bother with a browser in VR? 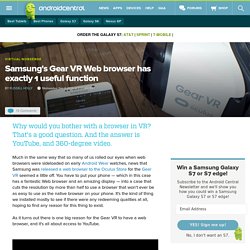 That's a good question. And the answer is YouTube, and 360-degree video. Much in the same way that so many of us rolled our eyes when web browsers were sideloaded on early Android Wear watches, news that Samsung was released a web browser to the Oculus Store for the Gear VR seemed a little off. 5 Gear VR games that shouldn't be missed. When it comes to gaming on VR, a controller might seem counter intuitive. 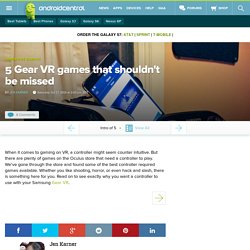 But there are plenty of games on the Oculus store that need a controller to play. We've gone through the store and found some of the best controller required games available. Whether you like shooting, horror, or even hack and slash, there is something here for you. Read on to see exactly why you want a controller to use with your Samsung Gear VR. Read now: Check out 5 games you need a controller to play. 1. Protocol Zero is a really fun sneak and shoot style game. The controls on this one work well for the most part but are a little bit clunky in some respects. Protocol Zero is available for $4.99 on the Oculus store, or you can try out the demo for free. 2. Dreadhalls is a horror survival game that does it's job of scaring you quite well. The controls are displayed right as you start playing and work pretty well. You can try out the Dreadhalls demo for free or the full game for $4.99. 3. 4. 5. Exploring and socializing with AltspaceVR on the Samsung Gear VR. AltspaceVR Social Platform Launches On Samsung Gear VR. 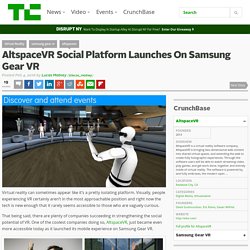 Visually, people experiencing VR certainly aren’t in the most approachable position and right now the tech is new enough that it rarely seems accessible to those who are vaguely curious. That being said, there are plenty of companies succeeding in strengthening the social potential of VR. One of the coolest companies doing so, AltspaceVR, just became even more accessible today as it launched its mobile experience on Samsung Gear VR. The concept of virtual reality being used as a digital meeting space is one of many concepts being flirted with by app developers as a major future use case. The distant idea that in a few years we may be able to kill teleconferencing as we know it and look someone in the eyes as we chat has been replaced by the idea of us being able to do (and create) almost anything together in a purely digital space. Facebook will soon let you Like and share 360-degree videos in the Gear VR. 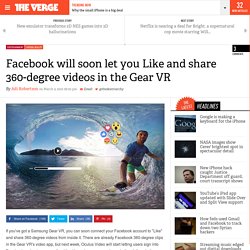 There are already Facebook 360-degree clips in the Gear VR's video app, but next week, Oculus Video will start letting users sign into Facebook and get a personalized feed based on pages and people they follow. In the "coming weeks," they'll also be able to add reactions to the videos or share them while inside VR. Aside from adding 360-degree Facebook videos at all, this is the first big tie-in between Oculus' Gear VR platform and the social network. Facebook bought Oculus in 2014, but it was slow about making its influence seen.

Last month, though, it announced that a dedicated social VR team was figuring out how to use virtual reality to "connect and share. " Outside the Facebook integration, the Gear VR has some other new social components this week.