36 Things Every 21st Century Teacher Should Be Able To Do 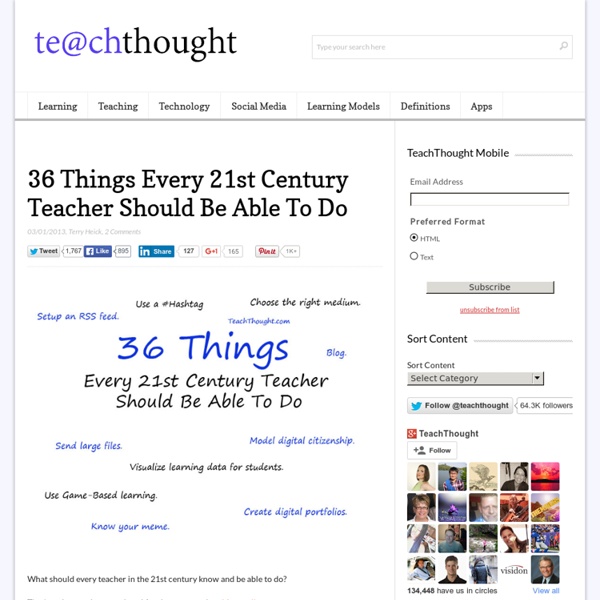 What should every teacher in the 21st century know and be able to do? That’s an interesting question. After just now seeing this excellent post on educatorstechnology.com, I thought I’d contribute to the conversation. I added the twist of ranking them from least complex to most complex, so novices can start at the bottom, and you veterans out there can skip right to 36. 36 Things Every 21st Century Teacher Should Be Able To Do 1. Whether you choose a text message, email, social media message, Skype session, or a Google+ Hangouts depends on who you need to communicate with and why—purpose and audience. 2. Email won’t always work. 3. Hit the Print Screen button near your number pad on a keyboard on Windows. 4. Know what it means to be Rick Roll’d, the difference between a fail and an epic fail, why Steve is a scumbag, and who sad Keannu is. 5. Not everyone loves technology. An RT as an olive branch. 6. 7. Tone is lost when you type. 8. This is dead-simple, but you never know. 9. 10. 11. 12.

The 10 Skills Modern Teachers Must Have The above image is 8.5×11″ so you can print it out. PDF is available here . There’s been a lot of talk about 21st century learners, 21st century teachers, and connected classrooms. There’s a daily influx of new technology into your inbox and your classroom feels woefully behind the times even if you’re flipping your 1:1 iPad classroom that’s already online and part of a MOOC . What are modern teachers to do with all this jargon and techno-babble being thrown at them all day long? Simple.

Educational Technology and Mobile Learning: 6 Must Watch Videos on 21st Education Check out the list below and share with us your feedback. Enjoy 1- Classroom of Tomorrow Five Tips for Fostering Learning in the Classroom August 5, 2013 By: Karen Spencer in Effective Teaching Strategies During the final meeting with one of my speech classes, I asked each student to give a few parting words to the class. I found a similar message resonating from many who spoke. Soon after, I received an email from an advisor at our school asking me to share some tips on fostering learning in the classroom. Has Education arrived in the 21st Century yet? This interesting table, comparing 20th and 21st Century learning, was conceived by William Rankin, a well credentialed doctor of Education from ACU, Texas. This graphic, which I found on Educational Technology and Mobile Learning, was originally published on iThinkEd in 2007, where you can read Rankin’s full thoughts that led to his creation of this table. What’s fascinating for me is the fact this was written 7 years ago. It doesn’t date the message.

Irish Fairy Tales: Mongan's Frenzy Sacred Texts Sagas and Legends Celtic Index Previous The abbot of the Monastery of Moville sent word to the story-tellers of Ireland that when they were in his neighbourhood they should call at the monastery, for he wished to collect and write down the stories which were in danger of being forgotten. "These things also must he told," said he. In particular he wished to gather tales which told of the deeds that had been done before the Gospel came to Ireland.

Future Work Skills 2020 In the 1990s, IBM’s Deep Blue beat grandmaster Gary Kasparov in chess; today IBM’sWatson supercomputer is beating contestants on Jeopardy. A decade ago, workersworried about jobs being outsourced overseas; today companies such as ODesk and LiveOps can assemble teams “in the cloud” to do sales, customer support, and many other tasks. Five years ago, it would have taken years for NASA to tag millions of photo-graphs taken by its telescope, but with the power of its collaborative platforms, the task can be accomplished in a few months with the help of thousands of human volunteers. Global connectivity, smart machines, and new media are just some of the drivers reshaping how we think about work, what constitutes work, and the skills we will need to be productive contributors in the future. This is the introduction to the report from the Institute for the Future (IFTF) for the University of Phoenix Research Institute : Future Work Skills 2020. 6.