The locomotion problem in Virtual Reality. (Seriously, I hesitated some time between this version and the original, but that’s not the point of this article, and I kinda like the 80’s vibe anyway…) I think we can all agree here, Virtual Reality (VR) is now, and not science-fiction anymore. 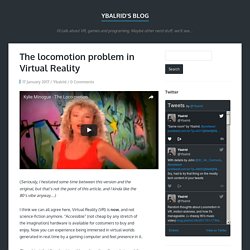 “Accessible” (not cheap by any stretch of the imagination) hardware is available for costumers to buy and enjoy. Now you can experience being immersed in virtual worlds generated in real time by a gaming computer and feel presence in it. The subject that I’m about to address doesn’t really apply to mobile (smartphone powered) VR since theses experiences tend to be static ones. Mobile VR will need to have reliable positional tracking of the user’s head before hitting this issue… We will limit the discussion on actual computer-based VR One problem still bother me, and the whole VR community as well is: In order to explore a virtual world, you have to, well, walk inside the virtual world. How to Stitch Samsung Gear VR 360° Footage in After Effects. Studio 360. Janicza Bravo makes short films about loneliness. 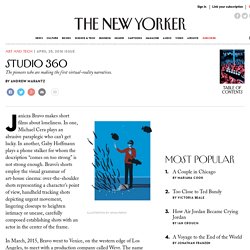 In one, Michael Cera plays an abrasive paraplegic who can’t get lucky. In another, Gaby Hoffmann plays a phone stalker for whom the description “comes on too strong” is not strong enough. Bravo’s shorts employ the visual grammar of art-house cinema: over-the-shoulder shots representing a character’s point of view, handheld tracking shots depicting urgent movement, lingering closeups to heighten intimacy or unease, carefully composed establishing shots with an actor in the center of the frame. In March, 2015, Bravo went to Venice, on the western edge of Los Angeles, to meet with a production company called Wevr. Samsung Gear VR Ultimate Guide – Ultra VR. Samsung Gear VR Ultimate Guide The Samsung Gear VR is an epic piece of hardware that, combined with compatible smartphone, can provide you with an immersive virtual reality experience that you won’t soon forget. 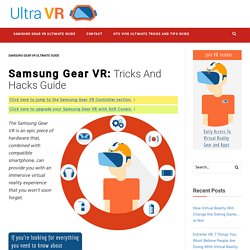 For many, this will be your first VR headset and your introduction to virtual reality. We’ll show how to use Samsung Gear VR with all the undocumented tricks and hacks with the Samsung Gear VR, including (but not limited to) how to get the best image quality, how to run third party software and how to hide videos you don’t want other people to see.

PreVR Checklist “It took me 2 weeks to realize that the black cover on the Samsung Gear VR did absolutely nothing. Before you start your virtual reality session with the Samsung Gear VR, you’ll want to set up your phone and headset properly to obtain the ultimate experience. When you plug your phone into the headset for the first time, the software will automatically install. Guide to the Best FREE Gear VR Content - VR Giant - Gear VR Reviews and News. Welcome to VR Giant’s Guide to the Best FREE Gear VR Content! 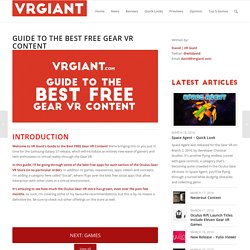 We’re bringing this to you just in time for the Samsung Galaxy S7 release, which will introduce an entirely new wave of gamers and tech enthusiasts to virtual reality through the Gear VR. In this guide, I’ll be going through some of the best free apps for each section of the Oculus Gear VR Store (in no particular order). In addition to games, experiences, apps, videos and concepts, I’m adding a category here called “Social”, where I’ll go over the best free social apps that allow interaction with other users in a virtual environment. It’s amazing to see how much the Oculus Gear VR store has grown, even over the past few months. As such, I’m covering some of my favourite recommendations, but this is by no means a definitive list.

GitHub - thejourneydude/awesome_vr: List of curated articles on VR for developers and designers. Amazon. Fifty apps that are reinventing mobile gaming. Innovation is an overused and abused word in the technology industry but if you strip it down to the basic principle of “new ideas”, it’s clear that there’s a lot of it going on in mobile games. 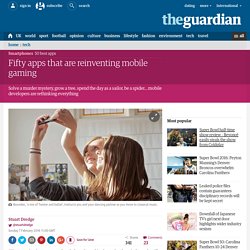 When you gather some of the best examples together, you realise how many new ideas are out there. For example, there have been some creative experiments with the idea of interactive fiction, from the round-the-world thrills of 80 Days to the beat-the-censors story of Blackbar. There are games that play with sound in new and interesting ways: Papa Sangre II is played entirely by listening rather than looking, while Dark Echo visualises your sounds on the screen. Both are – and this may not be a coincidence – among the creepiest mobile games available. Some games get you moving in the real world: wandering in the case of Ingress; jogging for your (virtual) life with Zombies, Run! One final, important point: the games in this list are innovative, but they’re also great. Zombies, Run! Top-10 Gear VR Apps Sure To Blow Your Mind - GearBrain. GearBrain’s compiled what we think are the Top Ten Gear VR Apps to get you started. 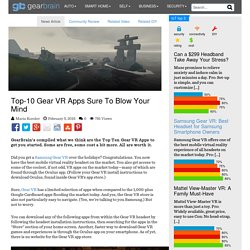 Some are free, some cost a bit more. All are worth it. Did you get a Samsung Gear VR over the holidays? Congratulations. You now have the best mobile virtual reality headset on the market. Sure, Gear VR has a limited selection of apps when compared to the 1,000-plus Google Cardboard apps flooding the market today. You can download any of the following apps from within the Gear VR headset by following the headset installation instructions, then searching for the apps in the “Store” section of your home screen. 10. Unlike the more passive experiences above, virtual reality games are, so far, more of a hit-or-miss experience. Other horror games you might try include Into the Dead ($8.99) and Sisters (free). 9. Like the name suggests, this app is a virtual reality version of the popular mobile running game, except now you are the runner. 8. Here Gear VR moves into the puzzle game arena. 7. 6. 5. 4.

We’re not talking about what VR is doing to our eyes … and our brains. Niantic Labs’ John Hanke will be delivering a fireside chat for AR/VR day (augmented reality/virtual reality) at GamesBeat 2016. 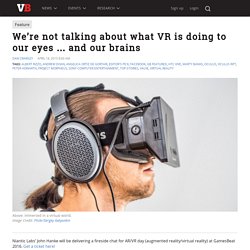 Get a ticket here! OK, so it’s pretty funny seeing someone fall over after trying a virtual reality headset for the first time. But with companies like Facebook, Valve, and Sony all pushing to bring their own VR solutions to a mainstream market — worth an estimated $30 billion by 2020 — maybe we should have more concern for what the technology is actually doing to our bodies and minds. It’s true that every new technology comes with new fears — and often they’re completely unfounded. Vergence–accommodation conflicts hinder visual performance and cause visual fatigue. Vergence-accommodation conflict is a bitch—here’s how to design around it. So, for me to say "I really like the UX challenges in VR" is a bit of an over-simplification. 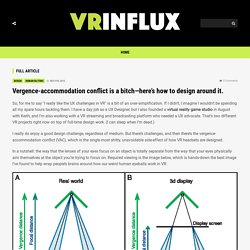 If I didn’t, I imagine I wouldn’t be spending all my spare hours tackling them. I have a day job as a UX Designer, but I also founded a virtual reality game studio in August with Keith, and I'm also working with a VR streaming and broadcasting platform who needed a UX advocate. That’s two different VR projects right now on top of full-time design work.

(I can sleep when I’m dead.) I really do enjoy a good design challenge, regardless of medium. In a nutshell: the way that the lenses of your eyes focus on an object is totally separate from the way that your eyes physically aim themselves at the object you’re trying to focus on. Miguelangelo Rosario's folders. GoPro Freedom 360 Explorer (360 video rig for VR) - Mutiny Media. Product Description Price: £250.00 per day or £750.00 per 7 days (Rig with GoPros) – Rig only £50.00 per day or £200.00 per 7 days. 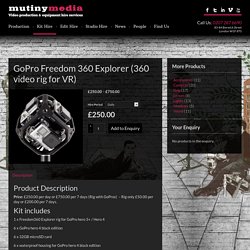 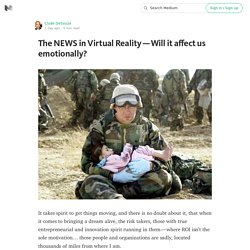 It takes spirit to get things moving, and there is no doubt about it, that when it comes to bringing a dream alive, the risk takers, those with true entrepreneurial and innovation spirit running in them — where ROI isn’t the sole motivation… those people and organizations are sadly, located thousands of miles from where I am. Reading about NYTVR, is nothing short of euphoric. They are bringing the world — the real world- closer to all of us through Virtual Reality. But, the NEWS in Virtual Reality, will it affect us emotionally? #360YouTube: Your Guide to the Best 360° Film Content — VR Dribble. This film has been getting a lot of attention in the last month. This is a fun comedy about a group of friends that find a piece of technology that transports, or rather 'telportales' them from location to location. This group, PAVR (popcorn VR) overcomes some of the obstacles prominent with filming in 360° in creative ways.

For instance, it has seemed difficult for viewers to experience cuts in 360°. Teleportaled utilizes lightning to transition you from location to location, thus making transitions smoother. Another challenge is getting viewers to look where you want them to, since they've got the option of looking in any direction. Premo VR Launches Parallaxed 360 VR Horror Movie App. Independent filmmakers, Kip Andersen and Keegan Kuhn, co-directors of Leonardo DiCaprio’s executively produced film for Netflix, Cowspiracy: The Sustainability Secret have launched a 360 degree film and app, produced by their new virtual reality (VR) production company, Premo VR.

Parallaxed 360 VR Horror Movie is an app that is now available on Google Play. Parallaxed 360 VR Horror Movie takes viewers into the psychologically stimulating world of Aurora, a young women who innocently accepts a pet sitting job, only to find herself navigating through a terrifyingly heart-racing journey. “As filmmakers, we are always looking to use technology to expand the way we visually tell stories,” said, Kip Andersen, Parallaxed Co-Director in a statement. Disassembled Oculus Rift Reveals Hidden Samsung Touchscreen. If you’ve ever wanted to delicately tear apart an Oculus Rift to expose its guts piece by piece, your Oculus autopsy dreams have been answered. In a teardown of an Oculus Developer Kit 2, the folks at the Online Components reveal in a new video the bits that make this virtual reality machine tick. That there’s a Samsung touchscreen buried deep inside doesn’t come as a complete surprise, as long as you’ve been following the Oculus Rift through its development stages.

Copyright Notice. Fxpodcast #294: Making the 360 degree short HELP. On the fxpodcast this week we talk to The Mill's Gawain Liddiard and Daniel Thuresson about the Google Spotlight Story ‘HELP’, a 360 degree short directed by Justin Lin through production company Bullit. Jesse Schell's Blog - Making Great VR: Six Lessons Learned From I Expect You To Die. The following blog post, unless otherwise noted, was written by a member of Gamasutra’s community. The thoughts and opinions expressed are those of the writer and not Gamasutra or its parent company.