Wikitude Augmented Reality SDK. The Educational Potential of Augmented Reality. I’m not sure about you, but watching my neighborhood—OK, the entire world—become obsessed with the augmented reality (AR) game Pokémon Go, I knew I had better do some serious research into AR’s implications and applications. 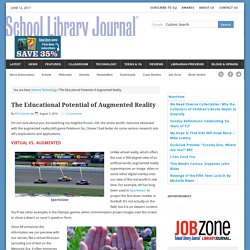 Virtual vs. augmented Sportvision Unlike virtual reality, which offers the user a 360-degree view of an artificial world, augmented reality superimposes an image, video or some other digital overlay onto our view of the real world in real time. For example, AR has long been used in Sportvision to project the first down marker in football. It’s not actually on the field, but it is on viewers’ screens. Magic Leap Since AR enhances the information we can perceive with our senses, like a virtual dinosaur sprouting out of text on the Mesozoic Era, it often immerses users into the experience in a way that makes learning more meaningful. Potential applications of AR Imagine this: a librarian creates AR for a book display. Arloon The Fantastic Flying Books of Morris Lessmore. Using Google's StreetView App with Cardboard. 8 of The Best Web Tools for Taking Students On Virtual Field Trips. April 3, 2017 The Internet has brought the entire world right into our own homes. 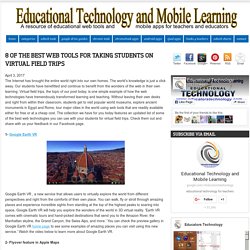 The world’s knowledge is just a click away. Our students have benefitted and continue to benefit from the wonders of the web in their own learning. Virtual field trips, the topic of our post today, is one simple example of how the web technologies have tremendously transformed learning and teaching. Without leaving their own desks and right from within their classroom, students get to visit popular world museums, explore ancient monuments in Egypt and Rome, tour major cities in the world using web tools that are readily available either for free or at a cheap cost. 3 Tips to Successfully Create Virtual Field Trips in Your Classroom.

3 Tips to Successfully Create Virtual Field Trips in Your Classroom By Cindy Wallace03/27/17 Recently, virtual reality (VR) has become a hot topic in the education space. 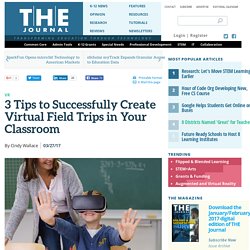 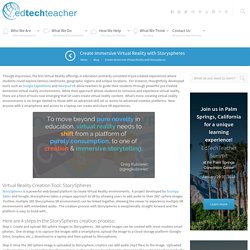 For instance, thoughtfully developed tools such as Google Expeditions and Nearpod VR allow teachers to guide their students through powerful pre-created immersive virtual reality environments. While their approach allows students to consume and experience virtual reality, there are a host of tools now emerging that let users create virtual reality content. What’s more, creating virtual reality environments is no longer limited to those with an advanced skill set or access to advanced creation platforms. Now anyone with a smartphone and access to a laptop can create and share VR experiences. Google Cardboard Apps for the Classroom via @friEdTechnology. The 13 Best Budget VR Headsets for iOS and Android in 2017 - Shopomo. [Update 13 December 2016: Now includes a review of the original Samsung Gear VR headset which has come down in price to below £60 recently] An increasing number of people seem to be catching onto the fact that VR apps for Android and iOS smartphones are glorious fun, so we’ve decided to put together a buyer’s guide to 13 best budget VR headsets. 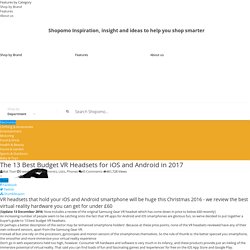 Or perhaps a better description of the sector may be ‘enhanced smartphone holders’. Because at these price points, none of the VR headsets reviewed have any of their own onboard sensors, apart from the Samsung Gear VR. Instead all but one rely on the processors, gyroscopes and motion sensors of the smartphones themselves. So the rule of thumb is: the better specced you smartphone, the smoother and more immersive your virtual reality experience Don’t go in with expectations held too high, however.

Class Tech Tips: 6 Ways to Use Google Cardboard in Your Classroom Tomorrow. One of my most popular posts this year has been a list of my favorite apps for Google Cardboard (check it out here). 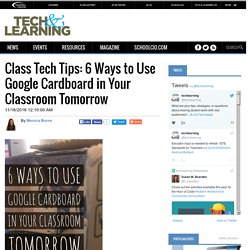 With this super cool and affordable headset, you can easily bring virtual reality into your classroom. Although we can easily get caught up in the wow or gimmick factor of this technology, there are lots of ways to create deeper learning experiences with virtual reality. Connect to current events: There are lots of reasons to read a news article with students and Google Cardboard can extend this experience. The New York Times VR app lets users peek into the places around the world. It’s a great way to build empathy and deepen a discussion of a topic. Login. How to Use Virtual Reality and Google Expeditions in the Classroom. Pinterest Virtual Reality in the Classroom – Part 2 *This post is sponsored by Samsung. 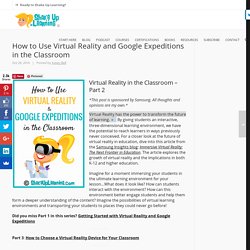 All thoughts and opinions are my own. App of the Week: When augmented reality reacts with chemistry. Ed. note: App of the Week picks are now being curated with help from the editors of Graphite.org, a free service from Common Sense Education. 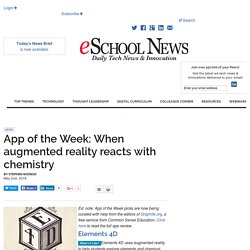 Click here to read the full app review. Elements 4D What’s It Like? Elements 4D uses augmented reality to help students explore elements and chemical reactions. To use the app, first print special element blocks on standard letter-size paper in your classroom. GeoGuessr - Let's explore the world! 8 Tips for Teachers Using Google Cardboard in School. Earlier this summer I shared a post on 5 Apps to Use with Google Cardboard (read it here). 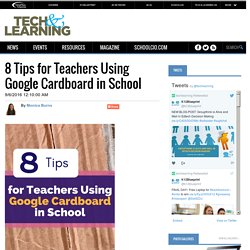 VR, PBL, and OERs: Four High Hopes for Learning with Edtech in the New School Year. Using technology in schools is no longer just about preparing our students for college and career. 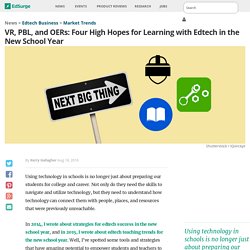 Not only do they need the skills to navigate and utilize technology, but they need to understand how technology can connect them with people, places, and resources that were previously unreachable. In 2014, I wrote about strategies for edtech success in the new school year, and in 2015, I wrote about edtech teaching trends for the new school year. Tech Tip: Bringing virtual reality to your classroom. One of the biggest trends to come out of ISTE 2016 was more viewers and services for virtual reality in education.

Here's a look at some my takeaways from the show: Nearpod, a student engagement platform, has added a virtual reality component to its services. 5 apps to jump-start augmented reality in the classroom. At the Augmented Reality Development Lab (ARDL), from virtual reality developer Digital Tech Frontier, lets users display relevant information at the appropriate time and location during an AR experience, which results in virtual 3-D objects appearing in the real world. Students and teachers look through a viewing device or at a monitor to see virtual objects such as planets, volcanoes, the human heart, or dinosaurs embedded within their real-world environment—and they can interact with and manipulate those objects to receive associated information.

Five apps to help educators incorporate augmented reality: 1. GeoGuesser: Using a phone, tablet or computer, a player is placed in a spot anywhere in the world using Google Maps. Exploring and looking for clues such as geographic signs, landmarks, and climate, the player has to guess where they are. 2. 3. Augmented Reality, Virtual Reality and Wearables for Learning! Oh My! “The whole art of teaching is the only art of awakening the natural curiosity of young minds for the purpose of satisfying it afterwards.” – Anatole France Students can experience new cultures, history, and understand the world in better ways with virtual reality, augmented reality, and wearables.

Teachers are using these technologies to send learners on virtual field trips or getting students to keep track of their steps, cardio, and health with fitness bands. These technologies help engage learners by providing sensory learning and sparking curiosity and imagination. For your next classes, go beyond getting students to read and learn only from worksheets and books.

Take your students on a virtual reality adventure. Google Expeditions in Full Rollout, iOS Version to Follow. ISTE 2016 Coverage. 10 of the best virtual reality apps for your smartphone. You don’t need to spend hundreds of pounds on an Oculus Rift or HTC Vive headset to give virtual reality a try. The Android or iPhone handset in your pocket is a VR device in its own right too, especially when paired with a sub-£20 Google Cardboard headset that uses your phone as its screen and works with both Android and iOS. If you’re getting started with VR on your smartphone, here are 10 of the best apps to explore. They’re regular Android and iOS apps rather than ones requiring Samsung’s Gear VR mobile headset – that’s a separate roundup in its own right for the future. Note, the recently-launched Guardian VR app (Android / iOS) is not included in this roundup for reasons of fairness, but it’s worth a look: currently it has the Guardian’s first VR film, 6x9, which tells the story of the psychological damage of extreme isolation.

YouTubeAndroid / iOS (Free) Reality revisited: Getting started with virtual reality in your classroom  Bringing Learning to Life Archives - Geomedia. NASA’s Eyes. Expeditions Pioneer Program. Nearpod - Virtual Reality Experiences. The 29 Oculus Rift games you'll be able to buy at launch. Two weeks before Oculus launches its Rift virtual reality headset, we're learning what games people will be able to play on it, and how much they can expect to pay for the experience.

At the Game Developers Conference in San Francisco, the company released the names and prices of 30 launch titles, one of them bundled with every order, that range from adapted Gear VR puzzle games to super-realistic simulators. It's possible that developers will submit more projects to the store before the Rift starts shipping on March 28th, Oculus head of studios Jason Rubin says, but below is a rough picture of what anyone who preorders the headset will have waiting for them. So far, there's no real "standard" price for an Oculus Rift game. The most expensive ones cost about the same as a big-budget non-VR game: Rift space flight games EVE: Valkyrie and Elite Dangerous will both sell for $59. There's no standard price for an Oculus Rift game Read next: Our Oculus Rift review.

To date, according to Google, some 500,000 students have participated in virtual journeys since the program's launch in September. As part of the program, Google is sending teams to schools throughout the world, providing all of the tools needed to participate in expeditions. A VR adventure right from your classroom.

A new way to see your world.