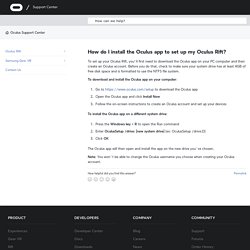 Before you do that, check to make sure your system drive has at least 4GB of free disk space and is formatted to use the NTFS file system. To download and install the Oculus app on your computer: Oculus Rift Update: You Can Now Install VR Apps On A Different Drive : TECH : Tech Times. Up until now, the default install directory for Oculus Rift games would automatically direct to the default system drive. 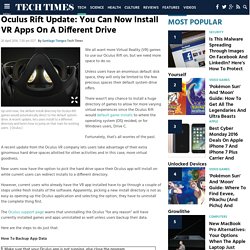 Oculus Rift update finally lets you install games to a different drive. My solid-state hard drive is 99-percent full, and it’s all because of virtual reality. 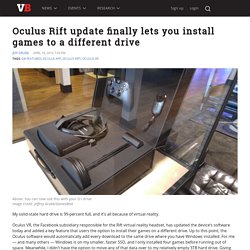 Oculus VR, the Facebook subsidiary responsible for the Rift virtual reality headset, has updated the device’s software today and added a key feature that users the option to install their games on a different drive. Up to this point, the Oculus software would automatically add every download to the same drive where you have Windows installed. For me — and many others — Windows is on my smaller, faster SSD, and I only installed four games before running out of space. Meanwhile, I didn’t have the option to move any of that data over to my relatively empty 3TB hard drive. Giving users the choice to use different storage locations means that consumers may have a lot more space, and that could lead to a lot more spending in a VR market that analysts from SuperData Research predict will generate $40 billion in revenues by 2020.

Backup your gave saves and app data. How to Sharpen Oculus Rift Visuals with Supersampling. Tired of jumbo pixels muddling in-game detail on your Rift games? 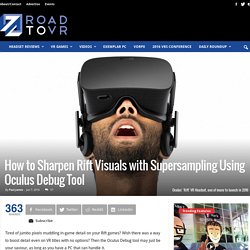 Wish there was a way to boost detail even on VR titles with no options? Then the Oculus Debug tool may just be your saviour, as long as you have a PC that can handle it. If you’re packing a PC with some reserve power and want a way to significantly improve image quality during your time in VR and your chosen game doesn’t include any options that help, we have a solution for you.

How to Use the Oculus Rift With SteamVR in 4 Steps. Although Valve is now prompting Rift users to install SteamVR, there’s more steps to actually get the Oculus Rift working with Steam. 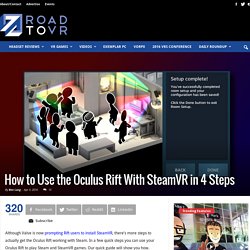 In a few quick steps you can use your Oculus Rift to play Steam and SteamVR games. Our quick guide will show you how. Valve wants Steam and SteamVR to be the VR content destination of all VR headsets. Although Valve is working closely with HTC to promote the Vive as the flagship headset for the platform, Steam VR also supports the consumer Oculus Rift and even the older Rift DK2 development kit. 'Alice VR' Review on Oculus Rift. Virtual reality is a fitting medium for adventure games. 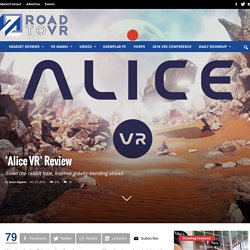 When the atmosphere is right and the scene is set, you start to think about the world in a way that taps deep into your reptilian brain, the same one that thinks “I exist here. Everything here is important to me.” When done right, you’re just there. 'Lone Echo' Multiplayer is a Totally Surprising Triumph for Competitive Zero-G VR Movement. Flying through an obstacle-filled arena in zero gravity like in the Battle Room scenes of Ender’s Game, catching and throwing a disk to score in an opposing team’s goal, all while in a Tron-looking virtual reality, is probably about the best way I can describe Lone Echo’s surprisingly successful multiplayer mode in one sentence. 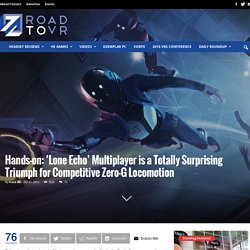 At Oculus Connect 3, I was able to try a singleplayer demo of Lone Echo, an Oculus Touch exclusive by developer Ready at Dawn that lets you grab, pull, and push yourself around in zero gravity as a robot, but I didn’t know what to expect when I was told that I’d get to try out a multiplayer demo as well, since the singleplayer didn’t really have any activities that I could imagine doing with someone else in a meaningful way, much less in a competitively. I played in a match of five vs. five. Our team captain—a real person playing in another room—taught us not only how to play the game, but also how to navigate in the 3D, zerg-g arena. 'Lone Echo' Multiplayer is a Totally Surprising Triumph for Competitive Zero-G VR Movement.

How to Sharpen Oculus Rift Visuals with Supersampling. How to Sharpen Oculus Rift Visuals with Supersampling. 4 Virtual Reality Desktops For Vive and Rift Compared. Envelop This ambitious approach to the VR desktop is very different from Virtual Desktop or BigScreen, and is probably closer to the virtual reality desktop most of us imagine: instead of simply reproducing a flat rectangle that shows what you’d see on your monitor, Envelop aims to reinvent the entire desktop, using the strengths of a VR workspace to revolutionise productivity. 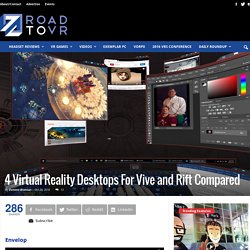 The main difference here is that each open program and window is treated as a separate movable and scalable 3D object, entirely free from the shackles of a monitor’s resolution and framing. As such, your desktop can become a vast 3D space, and you can literally surround yourself with windows of different sizes, each with individual adjustments for scale and depth. 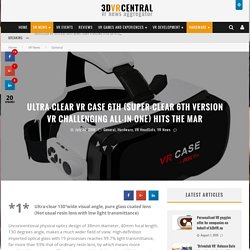 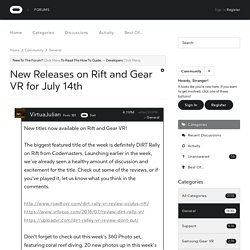 It perfectly captures the white knuckle feeling of racing on the edge as you hurtle along dangerous roads, knowing that one crash could end it all. In Oculus Rift, DiRT Rally VR immerses you like never before and offers an amazing 90fps experience that puts you in the driver’s seat. Developer: Codemasters. SoundStage’s Virtual Music Studio May Be The Trippiest VR App Yet – Artificial Reality.

“As far as I’m aware, this is the first music-creation app for the Vive,” Olson tells Digital Trends. “SoundStage’s virtual music studio may be the trippiest VR appHome > Cool Tech > SoundStage’s virtual music studio may be theWhen I was a kid during that time, this is how I’d imagine making music would look in the 21st century.”It seemed there was a gap in the market to get a product out there and see whether people liked it – and what they liked about it – compared to using music apps on an iPad or a desktop.

Read the full article, click here. @DigitalTrends: “SoundStage’s virtual music studio may be the trippiest #VR app yet” How to Avoid the Effect of Motion Sickness in VR. One of the biggest problems that all virtual reality (VR) developers currently face is movement within virtual reality and the potential of motion sickness. Generally speaking, this problem can be broken down into three components: hardware, software, and each individual’s own perception. In this post we’ll discuss current solutions to specific problems when it comes to motion sickness and the challenges that developers face. We’ll also explore ways on how motion sickness can be minimized by changing movement mechanics and using such techniques as movement towards the “viewpoint”, visualization of movement trajectories, using slow motion effects, movement through teleportation from point to point and putting a player into a “cabin”.

WebVR coming to Chrome to allow you to view all web pages in VR – Artificial Reality. Google's Tilt Brush VR app lets you paint virtual worlds on digital canvas. Virtual Reality could spawn the next generation of digital artists and designers who make landscapes you can walkthrough thanks to a new VR painting tool from Google. The Californian web giant said its Tilt Brush app enables users to paint in their own virtual studios and create 3D works of art within a virtual world. Running through HTC's Vive headset, users can paint and create using the HTC hand controller for brush strokes and as a virtual paint pallet. YouTube takes on Facebook with 360° live videos with Google's 'spatial audio' feature. YouTube has launched a feature that lets film makers livestream 360-degree clips and is designed to be viewed using virtual reality headsets.

A handful of concerts at Coachella music festival in California are the first to make use of the feature allowing viewers to navigate around the arena as if they were really there. Google has also rolled out a 'spatial audio' feature to simulates the effect of sounds coming from different directions and distances, to make the experience feel even more real. Home - 3D VR Central - Virtual Reality News. VR Lens Lab - Glasses for Virtual Reality Headsets by Peter Marx. Video Converter Ultimate-Convert Blu-ray, DVD, HD to any formats. Acrok Video Converter Ultimate is really an all-in-one solution to convert Blu-ray/DVD discs or ISO files, and convert popular video files to any video/audio formats, such as MKV, MP4, MOV, AVI, WMV, FLV, SWF, MPG, etc. with Acrok Video Converter Ultimate, you can easily convert Blu-ray/DVD/HD movies to best supported formats for editing software or portable devices, like iPad Air, iPad Pro, iPhone 6, iPad Mini 4, Android tablets or smartphones, etc.

PowerDVD 15 en est l’aboutissement et bénéficie de fonctionnalités innovantes. Buy Brorsoft Blu-ray Ripper for Windows. Blu-ray to MP4 - How to Rip and Convert Blu-ray to MP4 Easily and Fast. As a quite hot file extension, MP4 is widely used for saving media data and it's supported by various media players, video editing apps, online video websites, etc. HTC Vive vs Oculus Rift: which VR headset is better?: Games, system requirements, price and conclusion. Games All of this VR headset technology, regardless of the differences under the almost literal hood, is enough to power virtual reality worlds. Windows 10 Blu-ray Ripper: Rip, Convert and Backup Blu-ray on Windows 10. As a Windows 7/8 user, you probably would like to install Windows 10 for those amazing new features and a free upgrade at the first year.

This VR App Lets You Time Travel to Historic Events.