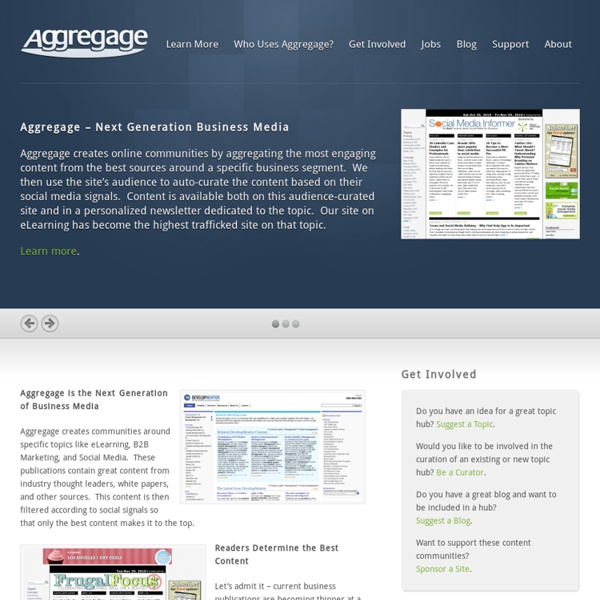 Aggregage is the Next Generation of Business Media Aggregage creates communities around specific topics like eLearning, B2B Marketing, and Social Media. These publications contain great content from industry thought leaders, white papers, and other sources. This content is then filtered according to social signals so that only the best content makes it to the top. Readers Determine the Best Content Let’s admit it – current business publications are becoming thinner at a time when there’s an ever increasing amount of information to keep up with.

Storystreamlab By MSL GROUP 50 Of The Best Google Chrome Extensions For Teachers 50 Of The Best Google Chrome Extensions For Teachers by TeachThought Staff Google Chrome is, increasingly, where it’s at. As of April 2014, Google Chrome become the de facto internet browser, passing Internet Explorer for the first time after a five-year free-fall from Microsoft’s out-of-favor software. Trapit 21st Century Presentations Byrne eventually debated Tufte about the merits of PowerPoint, and his artwork, along with accompanying music, ended up in both a book and a series of gallery shows called Envisioning Emotional Epistemological Information or E.E.E.I., for short. The title might be a mouthful, but it is a not-so-subtle (and good-natured) jab at Edward Tufte's own influential book about how we conceptualized data, Envisioning Information. Not only did David Byrne make visual art out of PowerPoint, he may have created the highest concept "diss track" of all time. Rethinking Traditional Presentations