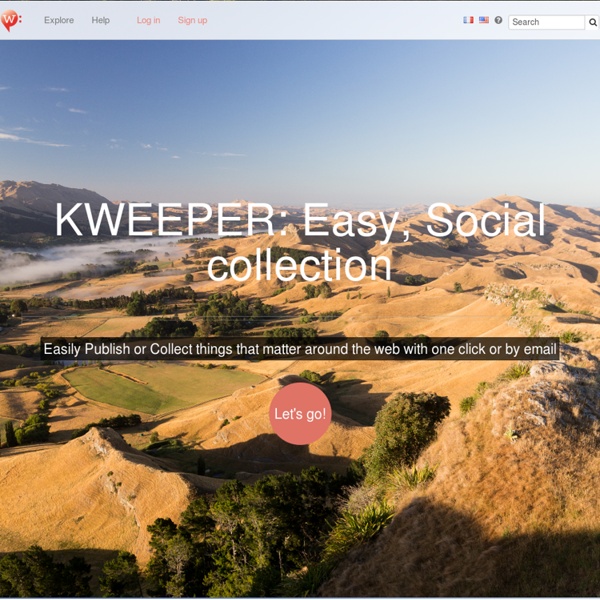 Social Media Timeline Last week, Dr. Sean Carton, the Chief Creative Officer of our web division (idfive), posted the following Social Media Timeline graphic at the idfive blog - attentionscan.com. Sean created the graphic as part of his preparation for speaking at the 2009 eduWEB conference in Chicago. Sean wrote: "It's definitely NOT to scale and I'm sure that plenty of people could quibble with what I chose to include as examples of "social media," (I define "social media" as "technologies that facilitate conversations") but I think it provides a pretty interesting overview of where this stuff came from and how long it's been around." What I took away from this graphic is that it's important to remember that these applications/sites go in and out of favor over time.

6 Pinterest for Men Sites Pinterest has long been criticized for being a women’s social network, totally dominated by pictures of weddings, food, crafts, jewelry and women’s fashion. And as a result, several smaller “Pinterest for men” sites started popping up so that guys could start “pinning” all their manly interests to a social network they could call their own. Pinterest is arguably still the biggest and most popular pinboard site , but who knows – maybe something like Manteresting.com or Gentlemint.com have the power to eventually grow just as big. With that said, here are a few “manly” themed Pinterest-style sites that can help you embrace the masculine side of social pinning. 1. Gentlemint

The Different Advantages Of Borrowing Short Term Personal Loans! – Medium Emergency expenses can have a very mysterious way of rising whenever you are running with shortage of money. You may need a loan when your income is exhausted and several expenses arrive such as your car needs an immediate repair, or you need a quick plumber to make small repair to your home kitchen or when your kid’s education expenses are due. Now, you no longer have to wait to fix the things urgently with the quick assistance of Short Term Personal Loans. During such trying times, you can quickly rely upon this loan to borrow immediate cash that can be used for short time frame. As the name suggests, this is a small duration monetary help made accessible for the salaried class people to help them overcome their mid month cash gaps at ease. Some of the top advantages that makes this loan a worthwhile cash approach among the loan seekers are as explained below:

Martijn van Strien launches Post-Couture Collective Dutch Design Week 2015: Dutch designer Martijn van Strien has launched a fashion company that allows consumers to download, customise, produce and self-assemble clothing designs. The Post-Couture Collective site launched with six pieces taken from the One Off collection by van Strien's own experimental fashion label mphvs. Each of the items can be personalised to the buyer's individual measurements, and then either downloaded and further customised before being produced at a local Makerspace, or delivered as a kit. "I was inspired by the challenge I saw in trying to develop a collection that would be completely makable in Makerspaces," said the designer, who launched his mphvs label with a range of laser-cut unisex garments. "Aesthetically I'm always inspired by architecture, the austerity of Brutalist buildings or the construction techniques that you find in bridges for example," he added.

China–France relations China–France relations, also known as Sino-French relations or Franco-Chinese relations, refers to the interstate relations between China and France (Kingdom or later). Note that the meaning of both "China" and "France" as entities has changed throughout history; this article will discuss what was commonly considered 'France' and 'China' at the time of the relationships in question. There have been many political, cultural and economic relationships between the two countries. History[edit] 25 Web Designs with Modular Content Block Layouts The grid based content block layout has become popular for many types of website, especially portfolios and inspiration ‘pinning’ sites. These sites have a series of tiling blocks that fill the page, often in a kind of modular format where they rearrange themselves depending on the viewport size. This post rounds up a collection of 25 cool website designs that all feature a modular style content block layout. Mercer Tavern DesignersMX

Monthly Loans Mississippi: Reasons That Works To Increase The Popularity Of 30 Day Payday Loans! Temporary cash problems due to unexpected expenses are quite common in the lives of working class people. It is because their stable income doesn’t allow them to save much for the rainy day. This is the very reason; most of the individuals look for the 30 Day Payday Loans in their desperate time to fulfill the financial commitments. With these services, they can simply opt for the small desired funds against their upcoming salary from the prominent online lender. Couple Couple is a more intimate way to share your life and the best way to stay in touch with your favorite person: it’s free, it’s fun, and it’s completely private! Couple, the app for two! Over 3.5 million downloads and a Google Play Staff Pick can’t be wrong! Couple keeps all your special moments saved privately in one place and connects you to only the most important person in your life for the most private messaging experience. Perfect for both long distance relationships and couples in same city.

Immaterials: light painting WiFi “The complex technologies the networked city relies upon to produce its effects remain distressingly opaque, even to those exposed to them on a daily basis.” – Adam Greenfield (2009) Immaterials: light painting WiFi film by Timo Arnall, Jørn Knutsen and Einar Sneve Martinussen. This project explores the invisible terrain of WiFi networks in urban spaces by light painting signal strength in long-exposure photographs. A four-metre tall measuring rod with 80 points of light reveals cross-sections through WiFi networks using a photographic technique called light-painting. This builds on a technique that was invented for the 2009 film ‘Immaterials: the Ghost in the Field’ which probed the edges of the invisible fields that surround RFID readers and tags in the world. It also began a series of investigations into what Matt Jones richly summarised as ‘Immaterials’.

eBay Launches Pinterest-Like Site Redesign to Accompany That New Logo According to eBay, the online marketplace logged over 4 million new users in the first half over 2012. We also know that eBay’s mobile apps just hit the 100 million download milestone. And as of today, eBay has over 350 million individual listings. eBay wants you to know that they are growing, and in an attempt to make the site feel fresh and hopefully give it greater functionality, the company has just announced a significant redesign. “Today we begin to introduce a series of significant new features and enhancements for our customers. We’re delivering a cleaner, contemporary look and feel; a more intuitive, convenient way to browse, decide and buy – both globally and locally; and a new personal way to curate your own shopping experience and discover items perfect for you,” says eBay President Devin Wenig.