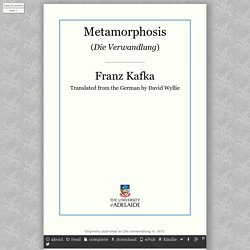 This web edition published by eBooks@Adelaide. Last updated Wednesday, December 17, 2014 at 14:17. English translation copyright © 2002 David Wyllie. Youth by Joseph Conrad. THIS could have occurred nowhere but in England, where men and sea interpenetrate, so to speak — the sea entering into the life of most men, and the men knowing something or everything about the sea, in the way of amusement, of travel, or of bread-winning. 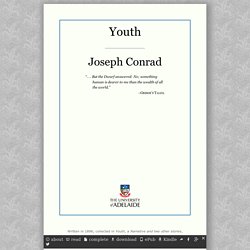 We were sitting round a mahogany table that reflected the bottle, the claret-glasses, and our faces as we leaned on our elbows. There was a director of companies, an accountant, a lawyer, Marlow, and myself. The director had been a CONWAY boy, the accountant had served four years at sea, the lawyer — a fine crusted Tory, High Churchman, the best of old fellows, the soul of honor — had been chief officer in the P. & O. service in the good old days when mail-boats were square-rigged at least on two masts, and used to come down the China Sea before a fair monsoon with stun’-sails set alow and aloft. We all began life in the merchant service. The Yellow Wallpaper by Charlotte Perkins Gilman. The Yellow Wallpaper It is very seldom that mere ordinary people like John and myself secure ancestral halls for the summer. 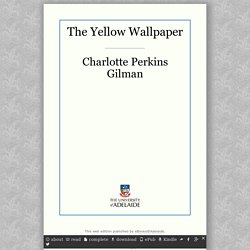 A colonial mansion, a hereditary estate, I would say a haunted house, and reach the height of romantic felicity — but that would be asking too much of fate! Still I will proudly declare that there is something queer about it. Else, why should it be let so cheaply? And why have stood so long untenanted? John laughs at me, of course, but one expects that in marriage. John is practical in the extreme. John is a physician, and PERHAPS—(I would not say it to a living soul, of course, but this is dead paper and a great relief to my mind)— PERHAPS that is one reason I do not get well faster. You see he does not believe I am sick! And what can one do? If a physician of high standing, and one’s own husband, assures friends and relatives that there is really nothing the matter with one but temporary nervous depression — a slight hysterical tendency — what is one to do? 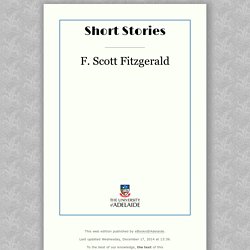 Last updated Wednesday, December 17, 2014 at 13:39. To Build a Fire from Lost Face by Jack London : Day had broken cold and grey, exceedingly cold and grey, when the man turned aside from the main Yukon trail and climbed the high earth-bank, where a dim and little-travelled trail led eastward through the fat spruce timberland. 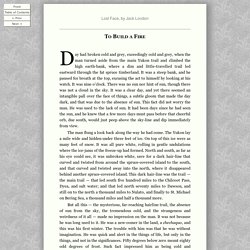 It was a steep bank, and he paused for breath at the top, excusing the act to himself by looking at his watch. It was nine o’clock. The Outsider by H.P. Lovecraft. Unhappy is he to whom the memories of childhood bring only fear and sadness. 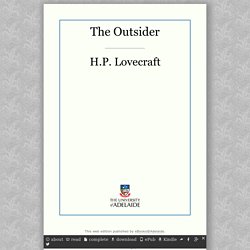 Wretched is he who looks back upon lone hours in vast and dismal chambers with brown hangings and maddening rows of antique books, or upon awed watches in twilight groves of grotesque, gigantic, and vine-encumbered trees that silently wave twisted branches far aloft. Such a lot the gods gave to me — to me, the dazed, the disappointed; the barren, the broken. And yet I am strangely content and cling desperately to those sere memories, when my mind momentarily threatens to reach beyond to the other. The Nose by Nikolai Gogol. ON 25 March an unusually strange event occurred in St. 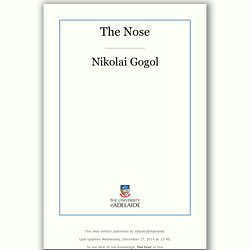 Petersburg. For that morning Barber Ivan Yakovlevitch, a dweller on the Vozkresensky Prospekt (his name is lost now — it no longer figures on a signboard bearing a portrait of a gentleman with a soaped cheek, and the words: “Also, Blood Let Here”)— for that morning Barber Ivan Yakovlevitch awoke early, and caught the smell of newly baked bread. Raising himself a little, he perceived his wife (a most respectable dame, and one especially fond of coffee) to be just in the act of drawing newly baked rolls from the oven. “Prascovia Osipovna,” he said, “I would rather not have any coffee for breakfast, but, instead, a hot roll and an onion,”— the truth being that he wanted both but knew it to be useless to ask for two things at once, as Prascovia Osipovna did not fancy such tricks.

“Oh, the fool shall have his bread,” the dame reflected. And duly she threw on to the table a roll. “Quite solid it is!” “You brute!” So he sat silent. The Necklace by Guy de Maupassant. By Guy de Maupassant The girl was one of those pretty and charming young creatures who sometimes are born, as if by a slip of fate, into a family of clerks. 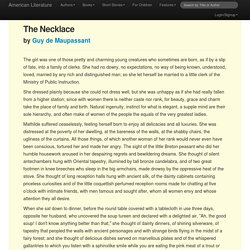 She had no dowry, no expectations, no way of being known, understood, loved, married by any rich and distinguished man; so she let herself be married to a little clerk of the Ministry of Public Instruction. She dressed plainly because she could not dress well, but she was unhappy as if she had really fallen from a higher station; since with women there is neither caste nor rank, for beauty, grace and charm take the place of family and birth. The Man Who Would Be King from The Phantom Rickshaw ... by Rudyard Kipling : 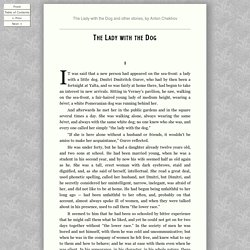 Dmitri Dmitritch Gurov, who had by then been a fortnight at Yalta, and so was fairly at home there, had begun to take an interest in new arrivals. Sitting in Verney’s pavilion, he saw, walking on the sea-front, a fair-haired young lady of medium height, wearing a béret; a white Pomeranian dog was running behind her. And afterwards he met her in the public gardens and in the square several times a day. THE-GARDEN-PARTY by Katherine Mansfield. The Fox by D. H. Lawrence. The Garden of Forking Paths by Jorge Luis Borges. The Fall of the House of Usher by Edgar Allan Poe. DURING the whole of a dull, dark, and soundless day in the autumn of the year, when the clouds hung oppressively low in the heavens, had been passing alone, on horseback, through a singularly dreary tract of country; and at length found myself, as the shades of the evening drew on, within view of the melancholy House of Usher. 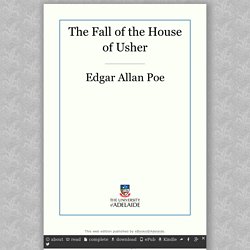 I know not how it was — but, with the first glimpse of the building, a sense of insufferable gloom pervaded my spirit. I say insufferable; for the feeling was unrelieved by any of that half-pleasurable, because poetic, sentiment, with which the mind usually receives even the sternest natural images of the desolate or terrible. Nevertheless, in this mansion of gloom I now proposed to myself a sojourn of some weeks. Its proprietor, Roderick Usher, had been one of my boon companions in boyhood; but many years had elapsed since our last meeting.

Although, as boys, we had been even intimate associates, yet really knew little of my friend. I. The Death of Ivan Ilych by Leo Tolstoy. "The Story of an Hour" Kate Chopin (1894) Knowing that Mrs. Mallard was afflicted with a heart trouble, great care was taken to break to her as gently as possible the news of her husband's death. It was her sister Josephine who told her, in broken sentences; veiled hints that revealed in half concealing. Shooting An Elephant by George Orwell. In Moulmein, in lower Burma, I was hated by large numbers of people – the only time in my life that I have been important enough for this to happen to me. I was sub-divisional police officer of the town, and in an aimless, petty kind of way anti-European feeling was very bitter. No one had the guts to raise a riot, but if a European woman went through the bazaars alone somebody would probably spit betel juice over her dress.

As a police officer I was an obvious target and was baited whenever it seemed safe to do so. Tales of Unrest, by Joseph Conrad : chapter3. There were two white men in charge of the trading station. A Christmas Carol by Charles Dickens.