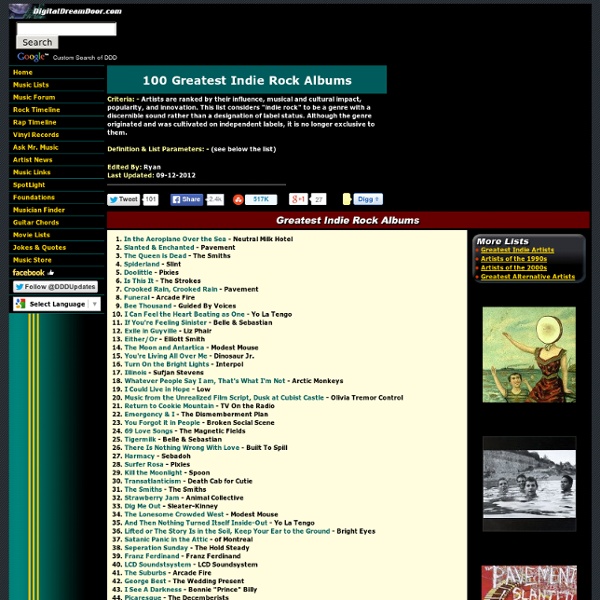 • what the general public often considers "indie rock" to be, those artists in the indie rock genre who have remained on indie rock labels their entire career. • key indie rock bands (like Modest Mouse and TV on the Radio) which have been signed away from their indie labels and are now on major labels. • Dance-punk, twee pop and various genres often considered to be offshoots of indie rock • bands that are on indie labels in one country, but a major in another (such as Phoenix). • British indie bands. In Britain, the genres that America calls "indie rock" and "alternative" are one genre, called simply "indie".

Generic Love Some years ago I was having dinner with my girlfriend, Liz; among other items on my plate was a heaping mound of mashed potatoes. When Liz noticed I had finished eating all of my potatoes, she instantly ladled another scoop onto my plate, without asking. She had done this before, and I felt I needed to say something: "Please don't automatically give me more food without checking first to see if I want more."

Atheists Know More About Religion Than the Pious Atheists Know More About Religion Than the Pious Posted on Sep 28, 2010 Well, this is awkward. The Pew Forum on Religion and Public Life undertook a study in which nonbelievers correctly answered more religious knowledge questions than the devout. Mormons and Jews also scored well and, like atheists, know more about Christianity than Christians. Otomata 16 Jul 2011 Click on the grid below to add cells, click on cells to change their direction, and press play to listen to your music. Update: Click here to get Otomata for your iPhone / iPod / iPad! Official facebook page: 10 simple ways to save yourself from messing up your life Stop taking so much notice of how you feel. How you feel is how you feel. It’ll pass soon. What you’re thinking is what you’re thinking. It’ll go too.

Religion has nothing to do with science – and vice versa Are religion and science incompatible? Some scientists assert that valid knowledge can only come from science. They hold that religious beliefs are the remains of pre-scientific explanations of the world and amount to nothing more than superstition. On the other side, some people of faith believe that science conveys a materialistic view of the world that denies the existence of any reality outside the material world. Is love an addiction In the early days of a new romance, it's oh so easy to let friends, work and other areas of your life fall by the wayside as you spend all of your time focused on your new love. In many ways, this all-consuming love can be a lot like an addiction, with each condition characterized by a lack of control, or even a sense of obsession. When psychiatrist Donatella Marazziti studied the brain chemistry of people in love, she found that the levels of serotonin in their brains were much lower than normal [source: BBC]. In fact, people in love exhibited the same low serotonin levels as people with obsessive-compulsive disorders. Serotonin, a neurotransmitter found in the brain, is responsible for regulating mood, impulse control and even how we handle our inhibitions. People with low serotonin levels often exhibit signs of uncontrollable obsession with, or addiction to, love, compulsive behaviors or even drugs and alcohol.

Confession of a Buddhist Atheist « Bodhi Thunder Confession of a Buddhist Atheist Image via Wikipedia By Grant Lawrence Bodhi Thunder Buddhism is different from nearly any other religion in that it doesn’t require a belief in God. How To Tell If Somebody Loves You Somebody loves you if they pick an eyelash off of your face or wet a napkin and apply it to your dirty skin. You didn’t ask for these things, but this person went ahead and did it anyway. They don’t want to see you looking like a fool with eyelashes and crumbs on your face. They notice these things. They really look at you and are the first to notice if something is amiss with your beautiful visage! Somebody loves you if they assume the role of caretaker when you’re sick. What Does Love Mean? When my grandmother got arthritis, she couldn’t bend over and paint her toenails anymore. So my grandfather does it for her all the time, even when his hands got arthritis too. That’s love. 2.

Most Creative Foam of Art Photo Manipulation June 6th, 2011 Linda There are many kind of art we have seen in this world, This incredible art of Photo manipulation just surprise us with how it is indeed possible to change the time and space. How simple can we see what is not theoretically be just cannot. Though just a theory, it is possible, and only a creative artist can make this possible, artist can change the theory of life with his creativity and art.