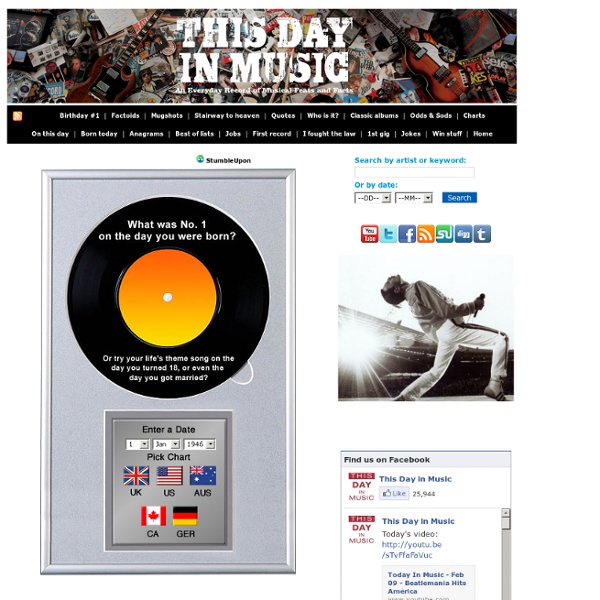 10 Weird and Wonderful Women Musicians "There is nothing new under the sun," said King Solomon. He obviously hadn't met Nina Hagen. Or any of the other women on this list, all musicians with talent, originality, charisma and intelligence––not to mention a wicked sartorial style! These women are all their own persons, confident in their individuality, wherever it may take them. Ten largest North American anime conventions of 2009 - AnimeCons News News Report January 12, 2010 Ten largest North American anime conventions of 2009 by Patrick Delahanty, AnimeCons.com Senior Editor World's most famous traffic outlaw giving away his 499-horsepower turbo motorcycle Of all the colorful characters in the motorcycle world, few polarize opinion as strongly as Sweden's mysterious "Ghost Rider." It's not hard to see why - with five DVDs full of heinous traffic law violations, including 300 km/h (180 mph) wheelies, police baiting and near-suicidal top speed time trials around the Swedish freeway system, he's probably the most famous flaunter of road rules the world has ever seen. And now, his most famous steed, a 499-horsepower turbocharged, naked Hayabusa, is being given away through a website lottery.

The 5 Most Widely Believed WWII Facts (That Are Bullshit) They say history is written by the winners, but the truth is even stranger than that. In reality history is often written by popular opinion, or wishful thinking, or crass politics. That's why so much of what we hear about an event like World War II--whether from textbooks, movies or something you overheard a smart-sounding guy say--is just plain bullshit. #5. America Won the War Single-Handedly 100 Ways to Discover and Enjoy Music UPDATE 12/10/13: We’ve released a follow-up to this post with 100 More Ways to Discover and Enjoy Music. Prepare yourself for another dose of Monday roundup madness! It’s time for another crazily comprehensive, yet carefully curated, look at an entire industry–the music industry to be specific. This if the first in a two-part series on the music industry which will conclude next week.

50 Greatest Guitar Solos Jimmy Page. Jack White. Jimi Hendrix: some of the music world's greatest ever axe-shredders (and that's only the Js). Fundamental to a band's sound, the guitarist can make or break a record and - if they're really something special - they can deliver a solo that elevates it to heights previously unimagined. Shift_JIS art An example of American Shift_JIS art. Giko Neko(ギコネコ, gikoneko?) Posted on the BBSHONTEN(HIRU NO BU)(本店（昼の部）, honten(hirunobu)?) in 1998. Shift_JIS art (Shift_Japanese Industrial Standards art) is artwork created from characters within the Shift JIS character set, a superset of ASCII intended for Japanese usage. Naturally there are many similarities between Shift_JIS artwork and ASCII art.

Op art Op Art Illusion design works that look like op art. Please note that this page could make you feel sick. "A pulser" The figure appears to scintillate. Moreover, rings of subjective color are observed.