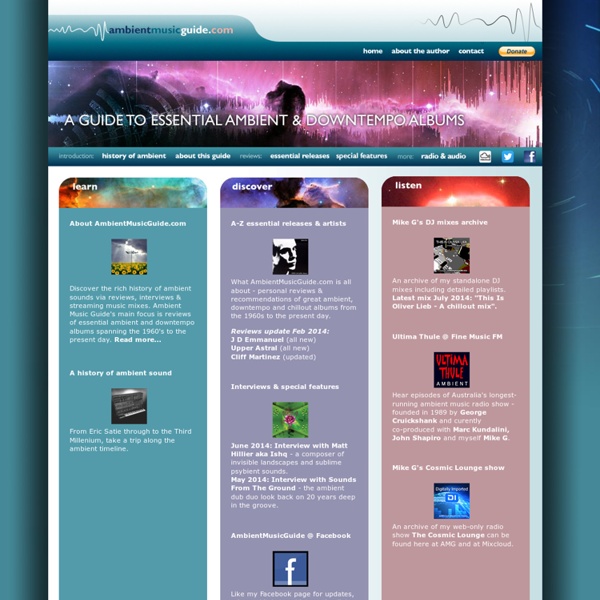 A-Z essential releases & artists What AmbientMusicGuide.com is all about - personal reviews & recommendations of great ambient, downtempo and chillout albums from the 1960s to the present day. Reviews update Feb 2014: J D Emmanuel (all new) Upper Astral (all new) Cliff Martinez (updated) Special features & interviews Latest addition: an interview with Steve Roach on the 30th Anniversray of his ambient classic Structures From Silence.

MacBook Touch by Tommaso Gecchelin MacBook Touch? Maybe, Just Maybe… Designer Tommaso Gecchelin isn’t oblivious to all the rumors surrounding a netbook or tablet-like PC made by our favorite fruit manufacturer. 9 ways to attend college for free Bankrate's community sharing policy Bankrate wants to hear from you and encourages thoughtful and constructive comments. We ask that you stay focused on the story topic, respect other people's opinions, and avoid profanity, offensive statements, illegal contents and advertisement posts. Comments are not reviewed before they are posted.

BellStudies CD "...this album changes the flow of personal time...a meditative, expansive world unfolds with no limits on the imagination." -CD Baby Brian Eno created this album both as a tribute to Long Now, and as an artistic expression of the vast swathes of time represented by the sheer "long-termness" of the philosophy behind the 10,000 Year Clock. "When we started thinking about The Clock, we naturally wondered what kind of sound it could make to announce the passage of time. Empire Magazine Celebrates 20 years of Movie Magic Found this FANTASTIC collection of celebrity photos for Empire as they celebrate their 20th anniversary, they took photos of 27 of the most iconic celebrities recreating some of the most iconic moments in movies! AWESOME! (via – Atticus Finch )

77 Million Paintings Thank you to all who attended the event, and especially our members who made it all possible. The Event The Long Now Foundation presented the North American Premiere of Brian Eno's 77 Million Paintings for 3 days at the Yerba Buena Center for the Arts in San Francisco. Friday and Saturday evening were absolutely packed with nearly 800 and 1000 attendees, respectfully. Sunday was the Long Now members evening. We were a bit surprised to find that the big crowd for each evening came right at the opening time, leaving the late night crowd with the installation much to themselves. New cool list of Linux must-have programs Update: A new, up-to-date collection is available. Please take a look! It's been approximately two years since I've written the first article, A (cool) list of Linux tools.

Your Age on Other Worlds Want to melt those years away? Travel to an outer planet! <div class="js-required"><hr> This Page requires a Javascript capable browser <hr></div> Fill in your birthdate below in the space indicated. (Note you must enter the year as a 4-digit number!) Click on the "Calculate" button. 7 Alternatives to Pandora and?Last.FM Whether you are annoyed by the ads on Pandora, the limited number of skips, or the abyss of cruel 30-second song teasers from Last.FM, many online listeners are growing weary of mainstream methods of hearing new music. While the Pandora algorithm is strong, and the Last.FM related artists tool is pretty useful, don’t fool yourself in to thinking that there aren’t other great ways to expose yourself to new music in the depths of cyberspace. Here are 7 alternatives to Pandora and Last.FM that will infuse your day with an uninterrupted stream of music that large record companies haven’t managed to squash under their thumbs yet. StumbleAudio StumbleAudio has a killer recommendation engine that works better for me than Pandora’s. Instead of “genomes”, StumbleAudio uses listeners’ favoritism as well as buying pattern data from online music stores to make suggestions.

Audiopad Audiopad is a composition and performance instrument for electronic music which tracks the positions of objects on a tabletop surface and converts their motion into music. One can pull sounds from a giant set of samples, juxtapose archived recordings against warm synthetic melodies, cut between drum loops to create new beats, and apply digital processing all at the same time on the same table. Audiopad not only allows for spontaneous reinterpretation of musical compositions, but also creates a visual and tactile dialogue between itself, the performer, and the audience. Strategic Acquisitions I have some good news for you, and then some bad news. The good news is first. There is a fifth edition of the Oblique Strategies that you can purchase without bidding usurious amounts at auction, as was previously the case. Click here for more details.

True Facts Facts - interesting, provocative, well-seasoned One out of ten children in Europe are conceived on an IKEA bed. Antarctica is the only continent without reptiles or snakes. An eagle can kill a young deer and fly away with it.