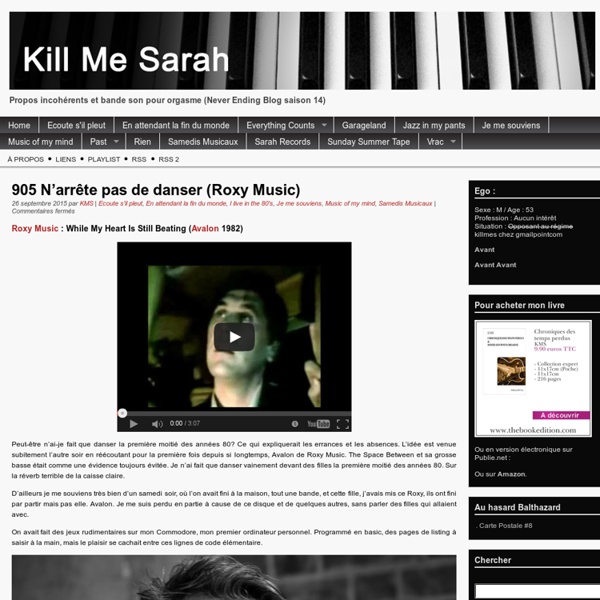 10 Weird and Wonderful Women Musicians "There is nothing new under the sun," said King Solomon. He obviously hadn't met Nina Hagen. Or any of the other women on this list, all musicians with talent, originality, charisma and intelligence––not to mention a wicked sartorial style! Film & Video The following films are presented for educational and non-commercial use only. All copyrights belong to the artists. About UbuWeb Film & Video UbuWeb is pleased to present thousands of avant-garde films & videos for your viewing pleasure. Music For Kids Who Can't Read Good: Weird in a good way. Like go An Album and a Song is a series where I pick a favorite album and song from a year (working up from 1960) for your listening pleasure. One rule: The year’s album and song can not both come from the same artist. Strangely enough, the Abbey Road got mixed reviews on it’s initial release, but retrospectively it’s rightfully considered The Beatles' last and perhaps greatest masterpiece. The album contains some of the finest songwriting of the band's careers whether it was Lennon's “Come Together”, Harrison’s “Something" (his greatest Beatles contribution), or McCartney’s masterful Side 2 medley, which sees the most legendary band of all time going out in the most grand fashion possible.

50 Greatest Guitar Solos Jimmy Page. Jack White. Jimi Hendrix: some of the music world's greatest ever axe-shredders (and that's only the Js). silver&silver streetsick: Larry Sultan Mike Mandel 1977 oldtimefriend: Chelsea Art Ball, London, 1958-1959, Sergio Larrain (Source: secretcinema1) Don't Die Wondering. December 17, 2013 20 Favourite Tracks Of 2013 In alphabetical order: Multimedia Sixties 1968 Music - A retro nostalgia look at music 1968 Song of the year With an album behind them and an almost hit with Down on Me, Big Brother and the Holding Company with Janis Joplin made a big splash at the 1967 Monterey Pop Festival, and the next year came the hit album Cheap Thrills with the big hit single Piece of My Heart and of course the unforgettable album cover by Robert Crumb. Piece of my Heart was so big a hit that Joplin left Big Brother to go on her own before the year ended Billboard Top 40 of 1968 1.

10½ Favorite Albums of 2012 by Maria Popova By popular demand, here is a music equivalent to complement those favorite books of 2012 — a highly subjective and hopelessly non-exhaustive selection of the 10 or so albums on heaviest rotation this year, many of which you might recognize from past Literary Jukebox installments. My Head Is An Animal (iTunes; UK) by Of Monsters and Men Release date: April 3, 2012 Love This Giant (iTunes; UK) by David Byrne and St. Ask The Dust Many people prefer personal computer pcs above notebooks, and even for good explanation. They tend to be reliable and will do issues notebook computers are not able to. Nonetheless, as a way to truly take full advantage of everything that a desktop has to offer, there are certain things you ought to know. You will definately get that information and facts within this item. Join an online group for those who find out about personal computers.