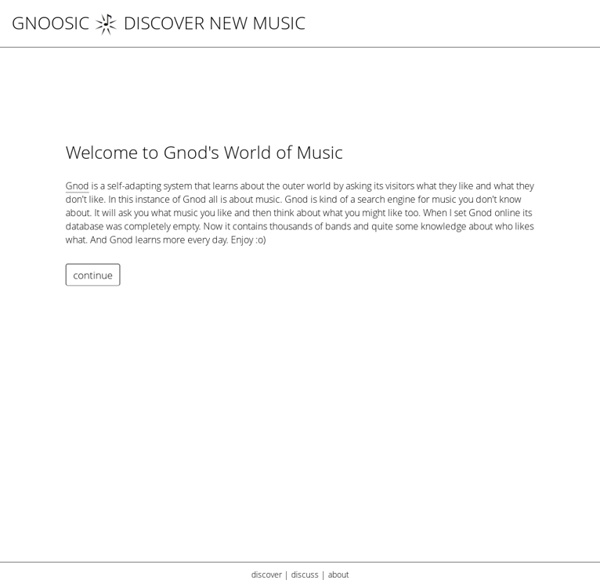 Welcome to Gnod's world of music... Even if you don't know what you are looking for - gnod will find it. Gnod is a self-adapting system that learns about the outer world by asking its visitors what they like and what they don't like. In this instance of gnod all is about music. Gnod is kind of a search engine for music you don't know about. It will ask you what music you like and then think about what you might like too.

Johnny Lists — 13 Resources You Should Use Instead of Cable by Johnny Webber 1. Crackle.com – Crackle provides streams for numerous movies and shows for free. Top 100: Greatest Songs (of All Time) It’s hard to come up with a list of the 100 greatest songs of all time and not leave people out, or be called a “son of a bitch” and other unflattering things by your readers. Nevertheless, inStash goes where not even Rolling Stone magazine has dared to tread. While the famed music publication needed a top 500 to feel comfortable even undertaking such a task, inStash honors the legends of rockers past, country’s greatest crooners, and the songs of today with 100 must-haves for your iPod or MP3 player. Don’t think of this as a top 100 greatest songs so much as a 100 essentials. Ratings themselves are always subjective. This is just inStash’s way of saying that if we could take only a century mark of songs with us through our remaining years, these are the ones we’d pick.

Into the AETHERstream *notcot in wearable , 10:55 I love when things just fall together. Like yesterday ~ finding out that the gorgeous AETHER APPAREL (who has been a kind supporter of NOTCOT over the years through beautiful advertising!) Watch Free TV Shows Online About Free TV Shows If you don't want to pay a monthly cable bill, you can still have access to a surprising amount of television content without paying anything at all. You can view these televisions programs online free of charge. Clips, highlights, online-exclusive content, recent episodes, entire seasons and sometimes even complete series are available for streaming from a variety of sources. Many of the programs are available for viewing via the networks on which they originally aired.

Every Noise at Once traditional scottish folk underground latin hip hop melodic progressive metal progressive post-hardcore progressive electro house australian alternative rock 10 Weird and Wonderful Women Musicians "There is nothing new under the sun," said King Solomon. He obviously hadn't met Nina Hagen. Or any of the other women on this list, all musicians with talent, originality, charisma and intelligence––not to mention a wicked sartorial style! These women are all their own persons, confident in their individuality, wherever it may take them. And, yes, they're all weird, but not in a contrived or derivative manner.

Before and After: Garage Turned Minimal Mini House » Curbly Sometimes a garage is just a garage and other times a garage is a miniature modern house just waiting to happen. In this case, it's the latter, which means I probably need to pack my bags, move back to Seattle and into this (now) house. It's not actually available, but I'm just crossing my fingers that designer Michelle de la Vega needs a few roommates (my husband, my dog, and I) in her fully functional 250 square foot space. We can all fit in there, right? How to Choose the Best VPN Service for Your Needs Virtual Private Networks (VPNs) are veritable Swiss Army Knives when it comes to privacy enhancement, censorship avoidance, anonymous file sharing, and more. But not all VPNs are created equal, and there’s no sense paying for features you don’t need. Read on as we explore the ins and outs of picking a perfect VPN service. We’re about to walk you through what VPNs are, why people use them, how to assess your VPN needs, and the important questions to ask when shopping for a VPN. If you’re impatient and you just want a really good VPN right this second, you can always jump right to the end and check out our recommendations.

40+ Interesting Pinterest Boards for Designers Only recently, the startup social pinboard site Pinterest, has taken the social bookmarking scene by storm as it earned its fame as the fastest growing social networking site. Since then, Pinterest continues to grow and now it hold a #45 Alexa ranking making popular social bookmark sites like digg.com, delicious.com, stumbleupon.com look like they had better days (see screenshot from Alexa at the bottom). This soaring popularity of Pinterest has caught the attention of designers and other creative individuals, and in no time, the virtual pinboard became popular among the design community.

Top 10 Websites To Watch TV Series Online For Free Without Downloading I like to watch Bleach, Pretty Little Liars, True Blood and many other TV series, but I am not living in the broadcast countries, and have no television, so I try to watch them online with computer. Like movies, there are also some websites for us to watch TV series online for free without downloading, and among which, below 10 are most popular: 1. 50 Greatest Guitar Solos Jimmy Page. Jack White. Jimi Hendrix: some of the music world's greatest ever axe-shredders (and that's only the Js). Fundamental to a band's sound, the guitarist can make or break a record and - if they're really something special - they can deliver a solo that elevates it to heights previously unimagined. Here, we celebrate those in the latter camp, who only needed six strings to change the world.

The 20 best tools for online collaboration Individuals in design teams don't always work together in the same office. You may be positioned in distributed groups, or working from home, and clients can come from all over the world. This is where collaboration tools come in – they make it easier and faster for designers to get feedback and approve artwork in a professional manner, and they come in all sort of forms, from free Android apps to Chrome extensions. Here we gather together some of the best available online tools to allow designers to collaborate together in real time. Some are created specifically for designers, some serve as a concept crafting whiteboard, and we've also included some more full-on project management tools for when you need to take your collaborative project to the next level. 01.

Hi Troy, Thanks for the comment. Yes, it's a really interesting way to find new stuff! by novasensa Nov 12

Similar to music map but with more specific results based on the sound you are looking for. they also do the same with movies and books :D Awesome for expanding your entertainment library in general. by troymiller Nov 11