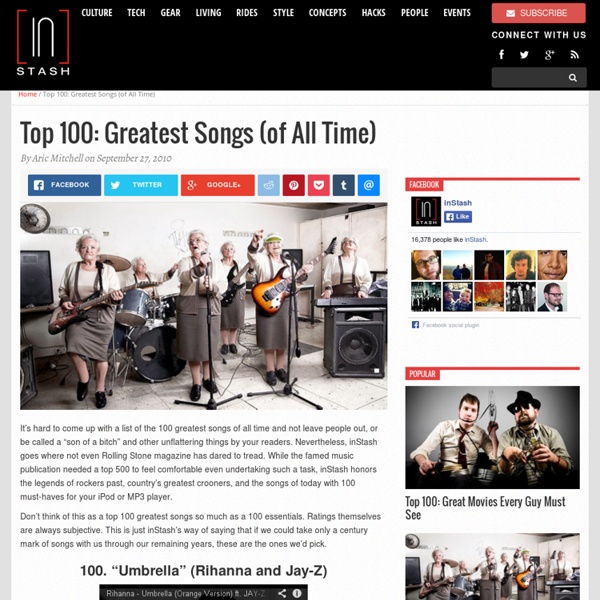 It’s hard to come up with a list of the 100 greatest songs of all time and not leave people out, or be called a “son of a bitch” and other unflattering things by your readers. Nevertheless, inStash goes where not even Rolling Stone magazine has dared to tread. While the famed music publication needed a top 500 to feel comfortable even undertaking such a task, inStash honors the legends of rockers past, country’s greatest crooners, and the songs of today with 100 must-haves for your iPod or MP3 player. Don’t think of this as a top 100 greatest songs so much as a 100 essentials. Ratings themselves are always subjective. This is just inStash’s way of saying that if we could take only a century mark of songs with us through our remaining years, these are the ones we’d pick. 100. What It’s About: Fame, fortune, turmoil, obscurity—the umbrella mentioned in this collaboration from Rihanna and rap artist Jay-Z is a metaphorical one that will protect friends from all of life’s changes. 99. 98.

100 Songs You Can’t Get Out Of Your Head Go ahead and take a handful of Advil now. You’re welcome. Say goodbye to the rest of the afternoon, because you'll either be entertained for hours by these 100 songs, or you will somehow chew off your own ears and go to the hospital. 1. “Love Shack” – The B-52s 2. CASH Music Sunset in the Rearview Time is fleeting. Summer is almost gone, and it feels like it started just yesterday. Similarly, today is my second year anniversary writing for Sunset, and I remember typing my debut Conan O’Brien post with like 10 Twitter followers and no real experience. Top 100 Best Acoustic Songs Ever -The Greatest of All Time Here is a list of the best acoustic songs ever written. Acoustic music has come a long way over the years, so many are “oldies” and many are “newies.” We are basing this list off of historical album sales, the ever so objective factor of acoustic-ness, but mostly how easily they make us cry. They are mostly arranged in alphabetical order, by song – so make sure you check out the whole list!

The songs of summer Memorial Day Weekend fills us with restless anticipation of how we will spend the long, hot days ahead, but it also brings fond memories of summers past, each one marked by a ubiquitous song that still has the power to bring us back to that time. Travel through the last 100 years to discover which summer songs were either released or peaked in popularity during the summer of their respective years. Some are about the summer or the stuff of summer: parties, picnics, fleeting love, nostalgia or fun. Some have that summer feeling in sound alone. Many are relevant to their times.

Most underrated songs by the most overrated artists. Songs for when you’re stuck in the friend zone… Requested by Big Teddy Bear · Compiled by BFFE Man, do I know the feeling. 01. The Magnetic Fields - “I’m Sorry I Love You” (69 Love Songs) 02. Badly Drawn Boy - “Disillusion” (The Hour Of The Bewilderbeast) 03. The Lost Art of the Mixtape — Cuepoint I spend a lot of time wishing that the cassette tape would make a comeback. There was a lot to love about cassettes, not the least of which was making mixtapes. While the phrase “mixtape” is still around, it’s come to mean something different, something other than the long lost tradition of meticulously recording song after song off of albums and the radio in order to make a perfect musical love letter. The art — and make no mistake about it, it is an art — of making a mixtape is lost on a generation that only has to drag and drop to complete a mix. There’s no love or passion involved in moving digital songs from one folder to another. Those “mixes” are just playlists held prisoner inside a device.

A 160+ Cover Song Playlist So. I know it’s Wednesday, but in light of my going AWOL last Friday I’m releasing two playlists this week. The first is very near and dear to my heart: freaking cover songs. Marinate in Melancholy: A Playlist of Wonderfully Miserable Songs A gloriously melancholy playlist to kick off 2014 compiled with suggestions from the DiS community. For a lot of people January is a time filled with promise. A fresh start. A clean slate.