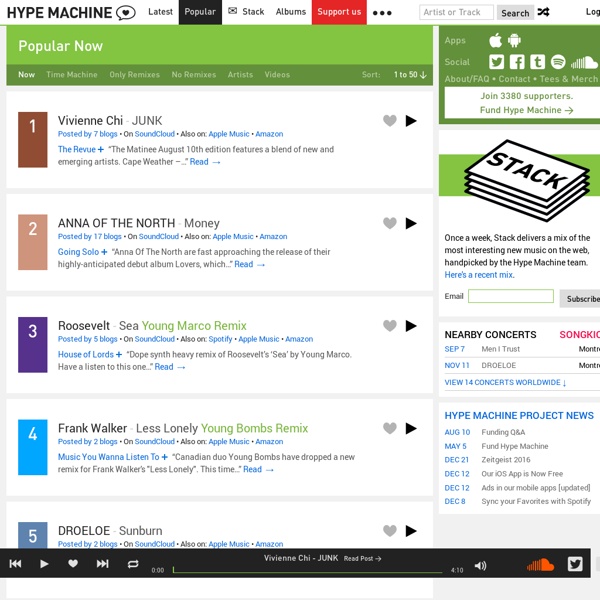 China expat and traveller community blog Food No CNY is complete without a few plates of jiǎozi, particularly if you're in the North. And while you can certainly just hop down to the supermarket and pick up a package of frozen dumplings, making your own is a whole lot more rewarding. If you're not fortunate enough to have Chinese in-laws to lend a hand, constructing the suckers can be a bit of a challenge.

Guitar Scales @ Chordbook.Com This page shows you some common scales on the guitar. You can use the repeat and speed buttons to practice along. blues BLUES The basis of most popular music! How to Change the World Amazon start selling the paperback edition of my latest book, APE: Author, Publisher, Entrepreneur. APE explains how to publish a book by breaking the process down into three stages: Author explains how to write a book. n2n a Layer Two Peer-to-Peer VPN n2n is a layer-two peer-to-peer virtual private network (VPN) which allows users to exploit features typical of P2P applications at network instead of application level. This means that users can gain native IP visibility (e.g. two PCs belonging to the same n2n network can ping each other) and be reachable with the same network IP address regardless of the network where they currently belong. In a nutshell, as OpenVPN moved SSL from application (e.g. used to implement the https protocol) to network protocol, n2n moves P2P from application to network level. The main n2n design features are: The n2n architecture is based on two components:

Music For Kids Who Can't Read Good An Album and a Song is a series where I pick a favorite album and song from a year (working up from 1960) for your listening pleasure. One rule: The year’s album and song can not both come from the same artist. Strangely enough, the Abbey Road got mixed reviews on it’s initial release, but retrospectively it’s rightfully considered The Beatles' last and perhaps greatest masterpiece. The album contains some of the finest songwriting of the band's careers whether it was Lennon's “Come Together”, Harrison’s “Something" (his greatest Beatles contribution), or McCartney’s masterful Side 2 medley, which sees the most legendary band of all time going out in the most grand fashion possible. Michael Jackson obviously had an incredible, groundbreaking solo career but if singing lead on the Jackson 5's "I Want You Back" was his only achievement, he’d still be a legend in my book. Listen to Abbey Road on Youtube and “I Want You Back" on Spotify.

Guitar Tuner @ Chordbook.Com The guitar tuner can be put in repeat mode (just click on or off the (R) buttons. So you can here the tunings and tune to them. This page also shows you how to make some common alternative tunings to your guitar. Standard guitar tuning Traditionally used to create a Celtic or ethnic sound, this tuning has been used by many guitarists including Jimmy Page of Led Zeppelin. OurielOhayon Every or nearly every single new service coming out to consumer has some sort of social layer where you need to "follow" people or topics in order to get fresh content updated all the time. That's how the web works today. It's not just about a frame and static content but a content stream of news and information coming your way: Facebook, twitter, pinterest, Flipboard, Pulse,…obviously but also all the new generation of games with social integration. Show me who you follow and i will tell you who you are. There is a major problem though: all the follow mechanisms in place are just dumb pipes with little intelligence. They present you a set a people (longer and longer as our graph grows) and you have to make a decision on who to follow at a moment where you don't even know yet the service

The Hype Machine is essential to any music geek. It crawls all music blogs to spot what's new or hot on the music blogosphere. They also have a greta podcast, album premieres, the best "best of" music every year (music zeitgeist) where they invite hot new artists to create a mix with the top 100 songs of the year on the website. ES-SEN-TIAL by fabrice.d Jan 16