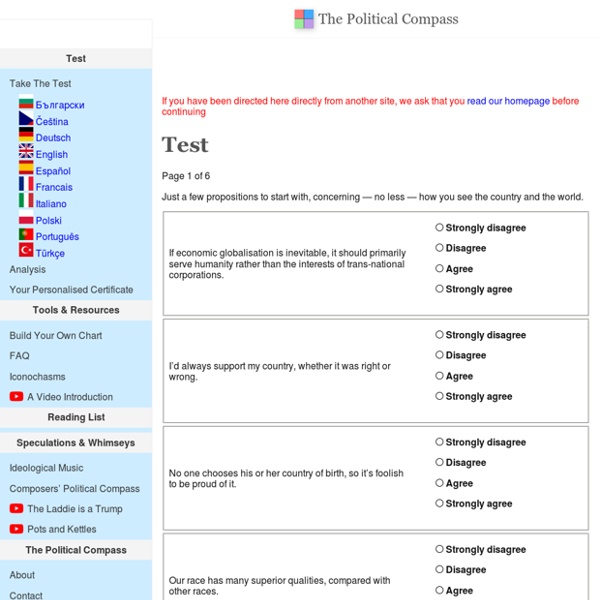 If I Were President... - Interactive Feature Opinion We've heard from the media and from experts — incessantly. What if we entered a pundit-free zone? THERE’S a near-total disconnect between our real, large, urgent problems and the who’s-up-who’s-down cage match that is the daily bread of our pundit class. Harry T. Burn Harry Thomas Burn, Sr. (November 12, 1895 – February 19, 1977)[1] was a member of the Tennessee General Assembly for McMinn County, Tennessee. Burn became the youngest member of the state legislature when he was elected at the age of twenty-two. He is best remembered for action taken to ratify the Nineteenth Amendment during his first term in the legislature. Education[edit] Tweet Forensics: Occupy vs. Tea Party Occupy Wall Street Twitter network as of November 15 2011. [Click the image for a larger version] Credit: Marc Smith/Social Media Research FoundationHere's an interesting analysis by Marc Smith at the Social Media Research Foundation in Belmont, California, of the difference between Occupy Wall Street and Tea Party tweeters. The above image shows the OWS network. Here's how it's described on Marc Smith's Flickr page:

Take Back the Senate, Senators The current condition of the Senate constitutes a national emergency. Not long ago, Americans looked to the Senate to be, in Walter Mondale’s words, the “national mediator,” reconciling regional and ideological differences through thoughtful legislating, serious debate, hard bargaining and principled compromise. Today, however, after a 20-year downward spiral, the once great Senate is polarized, paralyzed and dysfunctional. Last month, as she announced her decision to retire, Olympia Snowe, Republican of Maine, described a Senate that “routinely jettisons regular order,” “serially legislates by political brinksmanship” and “habitually eschews full debate and an open amendment process in favor of competing, up-or-down, take it or leave it proposals.”

Larry J. Sabato's Crystal Ball House 2018: Less Than a Year Out, Race for Control Is a Coin Flip 25 ratings changes, mostly in Democrats’ favor Kyle Kondik, Managing Editor, Sabato's Crystal Ball November 30th, 2017 In the aftermath of the 2014 midterm election, when the party that didn’t hold the White House (the Republicans) gained ground in the House for the 36th time in 39 midterms since the Civil War, I wrote the following in the Center for Politics’ postmortem on the election, The Surge: Practically speaking, though, House Democrats might have to root for the other party in the 2016 presidential race. Why?

Ignorance is bliss when it comes to challenging social issues Nov. 21, 2011 — The less people know about important complex issues such as the economy, energy consumption and the environment, the more they want to avoid becoming well-informed, according to new research published by the American Psychological Association. And the more urgent the issue, the more people want to remain unaware, according to a paper published online in APA's Journal of Personality and Social Psychology . "These studies were designed to help understand the so-called 'ignorance is bliss' approach to social issues," said author Steven Shepherd, a graduate student with the University of Waterloo in Ontario. "The findings can assist educators in addressing significant barriers to getting people involved and engaged in social issues." In one study, participants who felt most affected by the economic recession avoided information challenging the government's ability to manage the economy. However, they did not avoid positive information, the study said.