The Work of Jonathan Harris 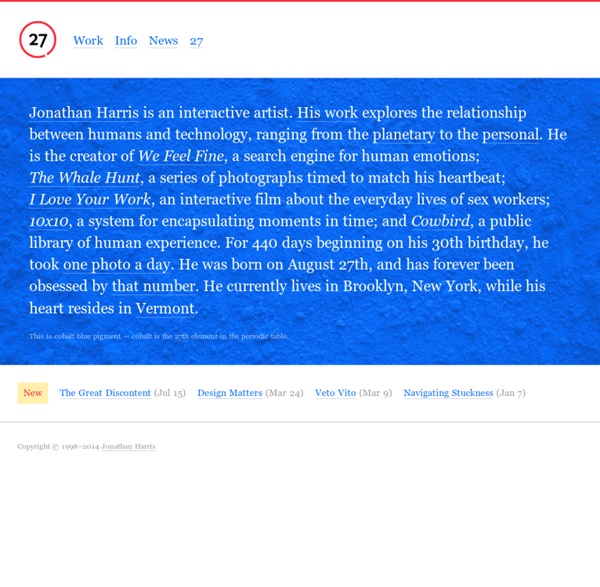 gijs van vaerenbergh / Reading Between the Lines Arch2O.com In this unique project by Pieterjan Gijs and Arnout Van Vaerenbergh, architecture meets art in a beautiful and gentle way. Made with 30 tons of steel and 2000 columns, and on a fundament of armed concrete this unconventional church provides the viewer with unique perspectives and views from each angel. Courtesy of Gijs Van Vaerenbergh Depending on the perspective of the viewer, the church can appear as a conventional solid mass or a can disappear and blend into the landscape almost entirely. The structure flirts with views of the mindscape dominating at times and ceasing to exist on others.

Museum Box Homepage Four Infographic Morsels 3 Earth In Space Thanks to Steve Haddock for that one. Apparently this map is secreted on Google Earth somewhere. Can anybody find a link for it? And on a similar theme – the undiscovered country, Antarctica, grokkable for size. (Apols. Mark Coleran – Visual Design for Film An INCOMING EMAIL alert in 200 point text suddenly flies across your monitor. Why Are Europeans White Skinned? (Thanks to Peter Ayres) Knol, “Google’s Wikipedia”, rules BTW. Mind Mapping A Mind MapLunchbreath’s amusing dig at Mind Mapping (which I personally find rubbish) There’s a bunch more hand-drawn infographical goodness on LunchBreath’s Flickr Stream. Hmmm, strangely map themed this time. In the meantime, if you come across any visual delights, please send them through.

EBMM > Émilie Brout & Maxime Marion 25 Mind-Blowing Aerial Photographs Around the World Rano Kau volcano in Rapa Nui National Park, Easter Island, Chile – Photograph by YANN ARTHUS BERTRAND For me, the allure of aerial photography is the unique perspective it gives. The world feels so different when viewed from above. It always gives me a newfound appreciation for this pale blue dot we call home. In my opinion, there is no better aerial photographer than Yann Arthus Bertrand. His volume of work is incomparable, and he has an incredible eye for the interesting and provocative. 2. Photograph by YANN ARTHUS BERTRAND 3. 4. 5. Born in Paris, France on March 13, 1946, Yann Arthus-Bertrand is a world-renowned photographer specializing in aerial photography. Upon his return to France, he published in 1981 his first book Lions, first release of a series of 80 books. 6. 7. 8. 9. 10. YANN ARTHUS-BERTRAND continued… In the 90s, under the patronage of UNESCO, Yann embarked upon his most ambitious project: creating an image bank of the Earth seen from above. 11. 12. 13. 14. 15. 16. 17.

Innovate: Past Issues The Extreme Presentation(tm) Method World Brain World Brain is a collection of essays and addresses by the English science fiction pioneer, social reformer, evolutionary biologist and historian H. G. Wells, dating from the period of 1936–38. Throughout the book, Wells describes his vision of the world brain: a new, free, synthetic, authoritative, permanent "World Encyclopaedia" that could help world citizens make the best use of universal information resources and make the best contribution to world peace. Development of the idea[edit] World Encyclopedia[edit] Wellsian dream of World Brain was first expressed in a lecture delivered at the Royal Institution of Great Britain, Weekly Evening Meeting, Friday, 20 November 1936. My particular line of country has always been generalization of synthesis. He wished the world to be such a whole "as coherent and consistent as possible." The Brain Organization of the Modern World[edit] (Lecture delivered in America, October and November 1937) A Permanent World Encyclopedia[edit] Brian R. [edit]

ANGELA WASHKO - Playing A Girl Screened/Exhibited:The Sun That Never Sets: Spectacle and Normalcy in Time, SPRING/BREAK Art Fair, NYCSubversive Strategies in Online Gaming Culture, Kiasma Museum of Contemporary Art, Helsinki FinlandA Haven, Art Connects New York, NYCAngela Washko: It's Just Not Fair, Austin Peay State UniversityParameters: Jena Cummiskey, Kyle J Thompson, Angela Washko, Center for Design and Geopolitics, UCSD, San Diego In early 2012 Angela Washko founded "The Council on Gender Sensitivity and Behavioral Awareness in World of Warcraft" as an intervention within World of Warcraft, the most popular massively multiplayer role playing game of all time. In this particular performance, I discussed several male players' decision to play female toons (avatars) and also got into a discussion with a female player about her belief that if you wear revealing clothing it's your fault that you get raped (hardcore slut-shaming).

70 Photos That Will Take Your Breath Away We here at DPShots believe that the easiest way to learn photography is to learn it by example. Every now and then we come up with some amazing photography examples that take your breath away. This post is no different. We have collected some of the most amazing, most awesome and THE most beautiful photography we could ever get our hands on. From wildlife to magic to a guy sleeping on the back of a buffalo, this post has photographs for all kinds of photographers to take inspiration from. We have collected over 70 majestic photographs that are simply to good to miss. We hope you like this post and endless others that you will get to checkout in future if you are subscribed to our RSS. The Fearless Cat Dael Giraffe says Hi!. Idealists…foolish enough to throw caution to the winds…have advanced mankind and have enriched the world. Kry Back Off! day forty two – trapped [Explored FP] A Lesson in Rockin’ Out Things never happen the same way twice Coffee Splash #2 Slow Motion Thirsty The Wrath Black Swan