If Democrats Want to Challenge Trump, They Need a New Strategy. The Future of Liberalism and the Politicization of Everything - Niskanen Center. January 25, 2017 by Samuel Hammond The ideals of liberalism seem increasingly under threat these days, so it’s worth reviewing what they are, where they come from, and why it’s essential that they make a comeback (a PDF version of this essay is available here). 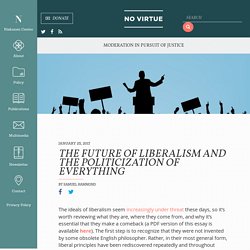 The first step is to recognize that they were not invented by some obsolete English philosopher. Rather, in their most general form, liberal principles have been rediscovered repeatedly and throughout history as practical tools for reconciling two basic social facts: Many of our deepest moral and metaphysical beliefs, like how to live a good life or which God to worship, are inherently contestable — reasonable people can and will disagree;We nonetheless all stand to benefit (on our own terms) from a social structure that enables peaceful cooperation. Take, for instance, our separation of church and state. Howard Dean: How to Move Beyond the Two-Party System. Photo I stand with Hillary Clinton in the presidential race. 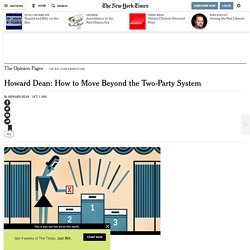 Others will back Donald J. Trump. America Is Becoming More Liberal. Over roughly the past 18 months, the following events have transfixed the nation. 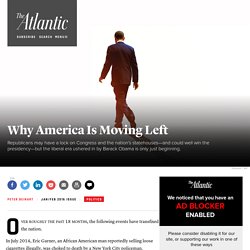 Then, in July, activists with Black Lives Matter, a movement that had gained national attention after Brown’s death, disrupted speeches by two Democratic presidential candidates in Phoenix, Arizona. Why Americans Are Becoming More Pessimistic. When Amer­ic­ans look to the fu­ture, two mega-trends evoke the most op­tim­ism about the na­tion’s long-term tra­ject­ory, the latest All­state/Na­tion­al Journ­al Heart­land Mon­it­or Poll has found. 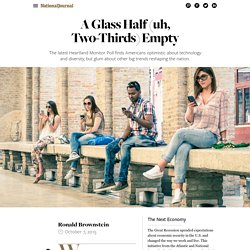 The Left vs. Right Partisan Divide 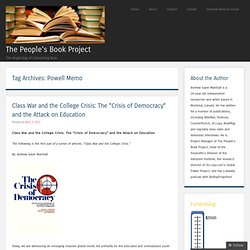 By: Andrew Gavin Marshall Today, we are witnessing an emerging massive global revolt, led primarily be the educated and unemployed youth of the world, against the institutionalized and established powers which seek to deprive them of a future worth living. The Powell Memo (or the Powell Manifesto): Text and Analysis. The Powell Memo was first published August 23, 1971 Introduction. 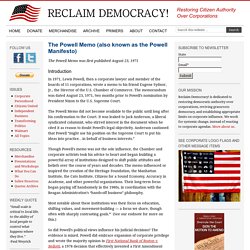 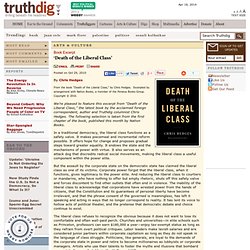 Excerpted by arrangement with Nation Books, a member of the Perseus Books Group. Copyright © 2010. Someone finally polled the 1% — And it's not pretty. On May 22, The Campaign for America's Future gave a conference on The New Populist Majority. 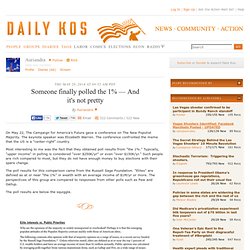 The keynote speaker was Elizabeth Warren. The conference confronted the meme that the US is a "center-right" country. Most interesting to me was the fact that they obtained poll results from "the 1%. " Typically, "upper income" in polling is considered "over $250K/yr" or even "over $150K/yr. " Such people are rich compared to most, but they do not have enough money to buy elections with their spare change. Chris Hedges: Obama is a "Poster Child for the Death of the Liberal Class" This is a rush transcript. 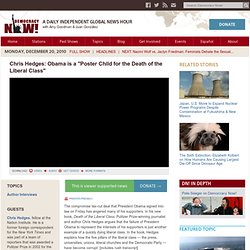 Copy may not be in its final form. AMY GOODMAN: President Obama signed the controversial $858 billion tax-cut legislation into law Friday. The Death of Neoliberalism. Our grandchildren won’t believe our stories about the 1990s. 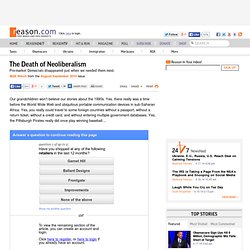 Yes, there really was a time before the World Wide Web and ubiquitous portable communication devices in sub-Saharan Africa. Phony Federalism. The 10th Amendment to the Constitution is like the skinny teenage girl who blossoms over the summer and suddenly finds herself besieged by suitors. Once ignored, it has found a host of champions among Republican presidential candidates who are competing to show their devotion. The amendment contains just one sentence: "The powers not delegated to the United States by the Constitution, nor prohibited by it to the States, are reserved to the States respectively, or to the people. " It is a bulwark of federalism, which allows states the freedom to adopt different policies reflecting their peculiar circumstances. It was meant as a check on those who would demand uniform practices from one end of America to the other. Given the conservative preference for local control and distrust of national mandates, it's no surprise to hear Republicans asserting the central importance of this provision.

Thoughts on Neoconservatism and Neoliberalism. I got to thinking today about how neocon and neoliberal are becoming interchangeable terms. They did not start out that way. My understanding is they are ways of rationalizing breaks with traditional conservatism and liberalism. Standard conservatism was fairly isolationist. Conservatism's embrace of the Cold War put it at odds with this tendency. This was partially resolved by accepting the Cold War as a military necessity despite its international commitments but limiting civilian programs like foreign aid outside this context and rejecting the concept of nation building altogether. Secret Debate Contract Reveals Obama and Romney Campaigns Exclude Third Parties, Control Questions.

This is a rush transcript. Copy may not be in its final form. NERMEEN SHAIKH: President Obama and Republican challenger Mitt Romney will hold their second debate tonight at Hofstra University on Long Island. President Obama faces increasing pressure after what many deemed a lackluster performance during the first debate in Denver, Colorado, earlier this month. The Romney campaign has since received a boost in the polls and raised a record $170 million in September.

Recent polls show the rivals are tied: an ABC News/Washington Post survey released Monday suggested 49 percent of voters are for the Democratic president while 46 percent support his Republican rival. PRESIDENT BARACK OBAMA: These days, Mitt Romney is for whatever you’re for. Noam Chomsky Slams America's Selfish Ayn Randian Elites. January 14, 2013 | Golden Rule: The Investment Theory of Politics (whole documentary) Fixing Democracy. 2012 presidential election: Obama, Romney, Biden, Ryan campaigns told in video game fights. Congress’ Approval Rating Ties Lowest in Gallup Records. PRINCETON, NJ -- Approval of Congress has dipped below 20% for only the fourth time in the 34 years Gallup has asked Americans to rate the job Congress is doing. Today's 18% score, based on a May 8-11 Gallup Poll, matches the record lows Gallup recorded in August 2007 and March 1992. Congressional approval started off the year at a depressed 23%, then dipped to 21% in March and 20% in April, before reaching the current record-tying low.

Take Back the Senate, Senators. If I Were President... - Interactive Feature. Opinion. Perceived Need for Third Party Reaches New High. This article is part of an ongoing series analyzing how the government shutdown and the debate over raising the debt ceiling are affecting Americans' views of government, government leaders, political parties, the economy, and the country in general.

We Need a 'Conservative' Party. Is the Democratic Party Relevant Anymore? (Image: Troy Page / t r u t h o u t; Adapted: samdupont / Flickr)Many Democrats examining what happened in the 2014 midterms are asking “what did the voters want?” Is Our Adults Learning? Dave Meslin: The antidote to apathy. The Quiet Movement to Make Government Fail Less Often.