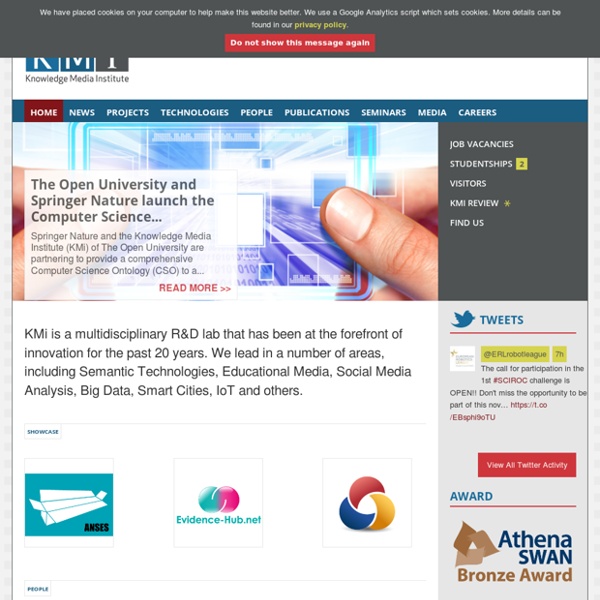 The Knowledge Media Institute (KMi) was set up in 1995 in recognition of the need for the Open University to be at the forefront of research and development in a convergence of areas that impacted on the OU's very nature: Cognitive and Learning Sciences, Artificial Intelligence and Semantic Technologies, and Multimedia. We chose to call this convergence Knowledge Media. Knowledge Media is about the processes of generating, understanding and sharing knowledge using several different media, as well as understanding how the use of different media shape these processes. KMi operates with reference to a number of basic tenets, which define the context in which we formulate and pursue our research objectives: Strategic Threads Our research is aligned with a number of broad strategic threads, currently Future Internet, Knowledge Management, Multimedia & Information Systems, Narrative Hypermedia, New Media Systems, Semantic Web & Knowledge Services and Social Software.

Related:  Science, Technology and The Environment

Sci-Hub provides access to nearly all scholarly literature The website Sci-Hub provides access to scholarly literature via full text PDF downloads. The site enables users to access articles that would otherwise be paywalled. Since its creation in 2011, Sci-Hub has grown rapidly in popularity. However, until now, the extent of Sci-Hub's coverage was unclear. As of March 2017, we find that Sci-Hub's database contains 68.9% of all 81.6 million scholarly articles, which rises to 85.2% for those published in closed access journals. Furthermore, Sci-Hub contains 77.0% of the 5.2 million articles published by inactive journals. SEAS Homepage SEAS is a software tool developed for intelligence analysts That records analytic reasoning and methods That supports collaborative analysis Across contemporary and historical situations and analysts and has broad applicability beyond intelligence analysis

Prospective EcoSocial Ontology Basic concept: create adaptable shared reference structures and symbology for cross-platform semantic linking and pattern reinforcement in non-fiction story-form media The Prospective Eco-Social Ontology (PESO) is an approach toward interoperable taxonomic systems for navigation and aggregation of diverse content libraries and topical threads in the realm of "common good" environmental and cultural regeneration work. The idea sprouted from designs for the BrowsEarth semantic story-scape platform. The present objective is to evolve a composable lexicon of visual tags (icons) which represent near-universal qualities of human value expression, as applicable to the What, How, and Why cognitive dimensions of an ontology of experiential narrative. Each of these dimensions will be mapped as taxonomic structures which attempt to intuitively, conveniently, discreetly, and completely arrange the relevant icons to several levels of nested specificity. Extended Early Version

Visual Sampler and Trends Talk Hello again, as the off-duty excuse of boreal summer fades out...we have some little news! Key visual elements of the platform interface are in the works, and a few taster versions are included above. Once the set is fairly stable, we will be releasing them as a creative commons kit to spread around. Relatedly, talk is afoot around a technical backend to track and link site/page statistics for each badge/tag deployment via configurable scripting, allowing a range of statistical monitoring and mapping (we heart mapping) plus smart browsing from cumulative records. So, a site like Treehugger might choose to begin visually tagging their posts with the PESO icons, and we could all track which topics and themes are drawing traffic, response, clickthrough, etc.

Pattern language A pattern language is a method of describing good design practices within a field of expertise. The term was coined by architect Christopher Alexander and popularized by his book A Pattern Language. Advocates of this design approach claim that ordinary people can use it to successfully solve very large, complex design problems. The History of Visual Communication This website, which contains the material of the course VA312, taught at Sabanci University, Istanbul, Turkey; attempts to walk you through the long and diverse history of a particular aspect of human endeavour: The translation of ideas, stories and concepts that are largely textual and/or word based into a visual format, i.e. visual communication. Wikipedia defines visual communication as: The primary tool by which man has visualised ideas is through the usage of writing and, by extension, type: Writing/type is the visual manifestation of the spoken word. And words are what we communicate with. Thus it is no overstatement when we say that type is the essence of visual communication and by extension of visual communication design. Type, where it is present, is simply the single most important element that you put on a page, since it inherently carries the essence of communication and communication is what our subject of study as graphic/multimedia designers is all about.