Understanding the Origins of Islamic State

Understanding islamic state ebook. Military strategist David Kilcullen: why the war on terror has failed - ABC Conversations with Richard Fidler. David Kilcullen Archive. Where did ISIS come from? The story starts here. How ISIS Spread in Syria and Iraq—and How to Stop It. “It is perfectly true, as the philosophers say, that life must be understood backwards. 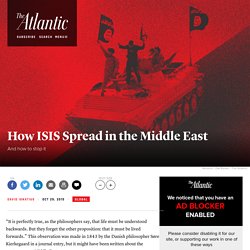 But they forget the other proposition: that it must be lived forwards.” This observation was made in 1843 by the Danish philosopher Søren Kierkegaard in a journal entry, but it might have been written about the contemporary Middle East. We have been living the Islamic State forwards, surprised at every turn, but we can perhaps begin to understand it backwards. Although ISIS took most of the world by surprise when it swept into the Iraqi city of Mosul in June 2014, the group and its forebears had been proclaiming their goals for a decade. Like many consequential events, this one didn’t sneak up on policymakers; they simply didn’t see what was taking shape in front of them. ISIS is mysterious in part because it is so many things at once. What is ravaging the Middle East right now is obviously deeper than ISIS. “I am sorry for America,” Sidawi said. And so we have.

Islamic State - Special Report. What is 'Islamic State'? Image copyright AP The jihadist group Islamic State (IS) burst on to the international scene in 2014 when it seized large swathes of territory in Syria and Iraq. 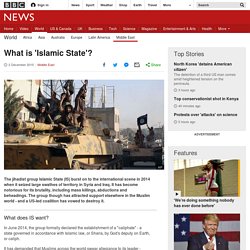 It has become notorious for its brutality, including mass killings, abductions and beheadings. The group though has attracted support elsewhere in the Muslim world - and a US-led coalition has vowed to destroy it. What does IS want? In June 2014, the group formally declared the establishment of a "caliphate" - a state governed in accordance with Islamic law, or Sharia, by God's deputy on Earth, or caliph. It has demanded that Muslims across the world swear allegiance to its leader - Ibrahim Awad Ibrahim al-Badri al-Samarrai, better known as Abu Bakr al-Baghdadi - and migrate to territory under its control.

IS has also told other jihadist groups worldwide that they must accept its supreme authority. Abu Bakr al-Baghdadi: Islamic State's driving force. On 5 July, Abu Bakr al-Baghdadi, known by his supporters as Caliph Ibrahim, left the shadows and showed his face for the first time, in a Friday sermon in Mosul, Iraq. 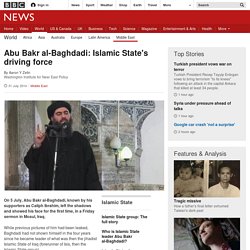 While previous pictures of him had been leaked, Baghdadi had not shown himself in the four years since he became leader of what was then the jihadist Islamic State of Iraq (forerunner of Isis, then the Islamic State group). Before April 2013, Baghdadi also did not release many audio messages. His first written statement was a eulogy to Osama Bin Laden in May 2011. His first audio message was released in July 2012 and predicted future victories for the Islamic State. Since the group's resurgence, which began 15 months ago, Baghdadi's media output has risen. 'Descendant of the Prophet' In July 2013, a Bahraini ideologue Turki al-Binali, writing under the pen name Abu Humam Bakr bin Abd al-Aziz al-Athari, wrote a biography of Baghdadi. 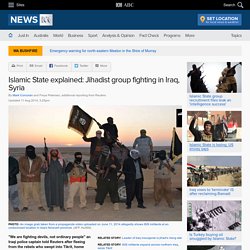 After a series of stunning victories, the black battle flags of the Islamic State of Iraq and Syria (ISIS) also fly over Iraq's second city Mosul and the Sunni strongholds of Fallujah and Ramadi that were captured in January. More than 500,000 Mosul residents have now fled the city. Rolling in from the desert in convoys of pick-up trucks, ISIS fighters, now going by the name of the Islamic State after declaring a caliphate, have outsmarted and outfought Iraq's 1 million strong security forces, trained and equipped by the US at a cost of $US25 billion.

Fact Sheet - Who's Who in the Syrian Civil War. Prepared by Elliot Friedland and produced with the kind assistance of Aymenn Jawad al-Tamimi and Dr. 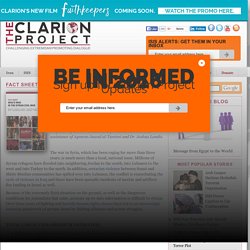 Joshua Landis. The war in Syria, which has been raging for more than three years, is much more than a local, national issue. 'Liars, hypocrites': Defectors tell of their disillusionment with Islamic State. Loaded: 0% Progress: 0% Islamic State defector brings 'goldmine' leak A disillusioned Islamic State defector leaks secret registration files that purportedly reveal the personal details and names of more than 22,000 supporters of the militant group to a British journalist. 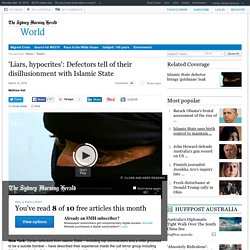 Australian IS applicant worried about his eyesight New York: Syrian defectors from Islamic State – including top commanders and a child groomed to be a suicide bomber – have described their experience inside the cult terror group including little known details of slave markets, drugged soldiers and how promises of sex and money have replaced paradise virgins as recruitment incentives. Interviews with 13 ex-IS members, conducted in a secret location in Turkey by American and Turkish academics, revealed the terror group runs a regulated slave trade of women while child soldiers – so-called "Cubs of the Caliphate" – are given drugs before embarking on suicide missions. "Eventually, you either fight for them or die. If the Syria ceasefire fails, Isis will be the least of the west’s problems. The military campaign against Islamic State is being reduced to a vicious sideshow as the Syrian civil war enters a new make-or-break phase. 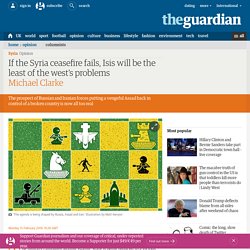 Russian military involvement has been a game-changer – saving Bashar al-Assad’s forces from near collapse, blatantly attacking western-backed opposition forces, and supplying T-90 tanks to Assad’s army closing in on Aleppo. For the western allies, time is running out. The Dawn of the Islamic State of Iraq and ash-Sham by Aymenn Jawad al-Tamimi. Syria's war: Who is fighting and why. Q&A recap: terrorist attack in Australia 'inevitable', security expert says.

It is “inevitable” that Australia will suffer another terrorist attack and those who believe the government can stamp out the threat are living in a “dream land”, a leading former military researcher has said. 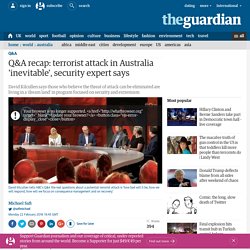 David Kilcullen, an Australian lieutenant colonel who advised the US military during the 2006 “surge” in Iraq, told ABC’s Q&A program on Monday the real questions were, “how bad will it be, how we will respond, how will we focus on consequence management and on recovery from that kind of attack.” An episode heavy on security threats and issues surrounding the war on Syria was kicked off by an audience member asking why the west did not “adopt the Israeli mentality” and crack down harder on extremist groups such as Islamic State.

“You can’t do that because you can’t bomb an ideology,” said Raihan Islam, a specialist in political Islam at the Australian National University. But entrenching Assad would only deepen the region’s problems, Eldad said. "No ISIS if we didn't invade Iraq": David Kilcullen interview. George Galloway at Oxford Union Debate on Isis.