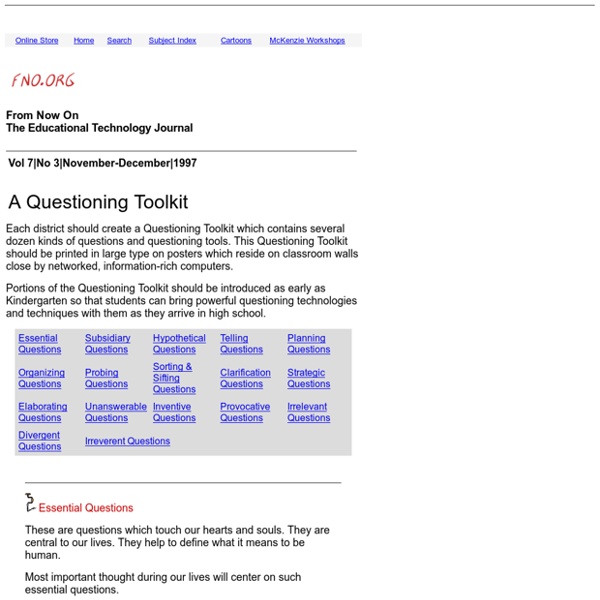 197 Educational YouTube Channels You Should Know About 197 Educational YouTube Channels You Should Know About If you don’t have a YouTube channel as an education provider, there’s a good chance you’re behind the times. Nearly every major educational institution in the world now hosts its own collection of videos featuring news, lectures, tutorials, and open courseware. Just as many individuals have their own channel, curating their expertise in a series of broadcasted lessons. Where Creativity Comes From Creativity has enabled humans to conquer every corner of this planet. Indeed our yen for innovation is one of the most salient characteristics of our kind. Yet our species is not the only one given to inventiveness. Researchers have documented the capacity in a growing number of other creatures.

A Life of Productivity – 100 time, energy, and attention hacks to be more productive When I graduated University with a business degree last May, I received two incredible full-time job offers, both of which I declined because I had a plan. For exactly one year, from May 1, 2013, through May 1, 2014, I would devour everything I could get my hands on about productivity, and write every day about the lessons I learned on A Year of Productivity. Over the last 12 months I have conducted countless productivity experiments on myself, interviewed some of the most productive people in the world, and read a ton of books and academic literature on productivity, all to explore how I could become as productive as possible, and then write about the lessons I learned. One year, 197 articles, and over one million hits later, I’ve reached the end of my year-long journey, but not before going out with a bang. This article’s a long one, but it’s pretty skimmable!

Teaching strategies Global education covers complex and controversial issues. This is a selection of teaching and learning approaches that develop knowledge and skills to respond to global issues. Freedom fighter or terrorist? Passionate or one-eyed? Passive resistance or civil uprising? Illegal arrival or asylum seeker? 12 Maps That Changed the World - Uri Friedman "All cultures have always believed that the map they valorize is real and true and objective and transparent," Brotton, a professor of Renaissance studies at Queen Mary University of London, told me. "All maps are always subjective.... Even today’s online geospatial applications on all your mobile devices and tablets, be they produced by Google or Apple or whoever, are still to some extent subjective maps." There are, in other words, no perfect maps—just maps that (more-or-less) perfectly capture our understanding of the world at discrete moments in time.

study finds walking improves creativity Stanford Report, April 24, 2014 Stanford researchers found that walking boosts creative inspiration. They examined creativity levels of people while they walked versus while they sat. A person's creative output increased by an average of 60 percent when walking. By May Wong 249 Bloom's Taxonomy Verbs For Critical Thinking Bloom’s Taxonomy’s verbs–also know as power verbs or thinking verbs–are extraordinarily powerful instructional planning tools. In fact, next to the concept of backwards-design and power standards, they are likely the most useful tool a teacher-as-learning-designer has access to. Why? They can be used for curriculum mapping, assessment design, lesson planning, personalizing and differentiating learning, and almost any other “thing” a teacher–or student–has to do. For example, if a standard asks students to infer and demonstrate an author’s position using evidence from the text, there’s a lot built into that kind of task.

10 Team-Building Games That Promote Collaborative Critical Thinking One of education’s primary goals is to groom the next generation of little humans to succeed in the “real world.” Yes, there are mounds of curricula they must master in a wide breadth of subjects, but education does not begin and end with a textbook or test. Other skills must be honed, too, not the least of which is how to get along with their peers and work well with others. This is not something that can be cultivated through rote memorization or with strategically placed posters.

(Almost) Everything You Ever Wanted to Know About Creativity 1Share Synopsis To be creative can be as simple as seeing something everyone else sees, but thinking what no one else thinks about it. What does it mean to be creative? Creativity is effective novelty. The Six Stages of Mental Strength Many people think that mentally strong people are simply born that way. That from the moment their feet hit the ground, they are simply endowed with some almost supernatural skill that allows them to face challenges bravely. Others think that mental strength is like a light bulb – it is either turned on or turned off. And if yours happens to be off, you are out of luck. What most people don’t know is that mental strength it is neither a genetic gift, nor a character trait.

31+ Mobile Learning Tips for Instructional Designers There’s a shift happening in the world of instructional design, and the new kid in town is mobile learning. Well, he’s hardly the new kid anymore—he’s set up shop and customers are pretty excited about what he’s got to offer. Learning anywhere, anytime? Sign us up! As the instructional designer next door, you are in a great position to work with this new guy, but are you ready? Bloom's and the Three Storey Intellect A colleague has given me an excellent poster she has developed on the three storey intellect. As a taxonomy of higher and lower order thinking, it is a clean and simple model. The three storey intellect was inspired Oliver Wendell Holmes.

YouthLearn Regardless of what topic you're teaching or the age of the kids you're working with, you'll want to make certain teaching techniques a standard part of your routine. By internalizing these fundamentals until you don't even have to think about them, you'll become a better coach, leader and teacher. Perhaps most important is that you understand and master sound modeling techniques. Kids learn much more by watching you than from anything you say. Good teaching is intentional, and it should be reflected in every thing you say and do.