Inspiration for the Hero inside of you. 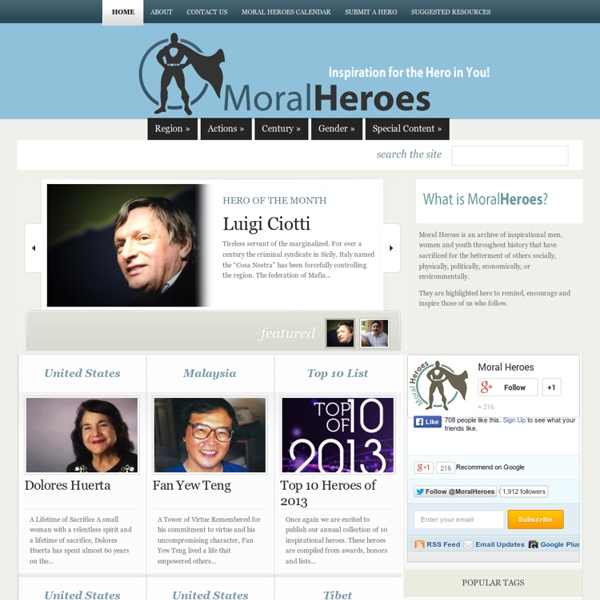 Top 40 Useful Sites To Learn New Skills The web is a powerful resource that can easily help you learn new skills. You just have to know where to look. Sure, you can use Google, Yahoo, or Bing to search for sites where you can learn new skills , but I figured I’d save you some time. The destruction of childhood: Student Research Center - powered by EBSCOhost Section: As free trade agreements forge new links to the rest of the world, we are implicitly endorsing brutal economic practices abroad that Western countries banned long ago. As my sons devour their burgers and fries at the local fast food restaurant, I examine the toy included with one of the "happy meals and notice that it was made in faraway Asia. Silently, I wonder: How happy was today's meal for the person who made this piece of brightly colored plastic?

10 Tips to Let Go of the Past & Embrace the Future "Two monks were on a pilgrimage. One day, they came to a deep river. At the edge of the river, a young woman sat weeping because she was afraid to cross the river without help. Meet Ali-and others just like him: Student Research Center - powered by EBSCOhost Countries like the US should ban imports produced by forced child labor A POSTER on the wall of my home office haunts me. It displays a large color photograph of a dark-skinned Asian boy, about eight years old, kneeling on bare knees and looking out from behind an iron gate. His forlorn black eyes stare at me, pleading. Through his half-open lips, he is making an appeal that I cannot hear.

10 Differences Between Successful and Unsuccessful People Everyone strives to be successful, but it doesn’t always come easily. The people who do end up reaching their highest potential always possess certain qualities and habits that allowed them to get there which separate them from those who don’t. Here are 10 differences between successful and unsuccessful people! Stigma, discrimination against mentally ill are common A separate and unequal system People with mental illness face legal discrimination Stigma against the mentally ill is so powerful that it's been codified for 50 years into federal law, and few outside the mental health system even realize it. This systemic discrimination, embedded in Medicaid and Medicare laws, has accelerated the emptying of state psychiatric hospitals, leaving many of the sickest and most vulnerable patients with nowhere to turn. Advocates and experts who spoke with USA TODAY describe a system in shambles, starved of funding while neglecting millions of people across the country each year.

69 Awesome Brain Hacks That Give You Mind-Blowing Powers Remember when Neo got to choose between the red pill and the blue pill? The blue pill would have put him back to sleep in the fake world of cubicles and steaks in the Matrix, where the red pill would wake him up to the real world and its industrial womb factory. You probably just chalked that scene up to another case of Hollywood turning a complicated situation into a simplistic metaphor, but what you probably didn't realize is that you're living out your own little Matrix scenario every time you go to the pharmacy. "I really hope being swallowed by a mirror is covered by my insurance." Life With Anthony: Student Research Center - powered by EBSCOhost He's a cute, sweet, happy toddler. A generation ago, he'd probably be growing up in an institution-but today his world is open For parents with three small kids-Michael is 4, Jack's 3, and Anthony is 19 months-Lisa and Mike Spellman are surprisingly calm people. From the jumble of bike helmets and bright plastic toys, to the family pictures on every table, to the five baby gates in the downstairs alone, it's obvious that they've happily surrendered to parenthood.

How to Be Alone: An Antidote to One of the Central Anxieties and Greatest Paradoxes of Our Time by Maria Popova “We live in a society which sees high self-esteem as a proof of well-being, but we do not want to be intimate with this admirable and desirable person.” If the odds of finding one’s soul mate are so dreadfully dismal and the secret of lasting love is largely a matter of concession, is it any wonder that a growing number of people choose to go solo? The choice of solitude, of active aloneness, has relevance not only to romance but to all human bonds — even Emerson, perhaps the most eloquent champion of friendship in the English language, lived a significant portion of his life in active solitude, the very state that enabled him to produce his enduring essays and journals. And yet that choice is one our culture treats with equal parts apprehension and contempt, particularly in our age of fetishistic connectivity.