25 Things You Should Know About Storytelling 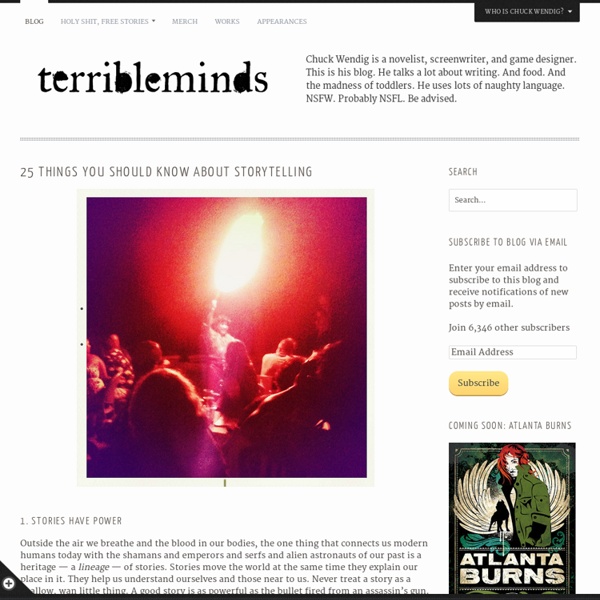 1. Stories Have Power Outside the air we breathe and the blood in our bodies, the one thing that connects us modern humans today with the shamans and emperors and serfs and alien astronauts of our past is a heritage — a lineage — of stories. Stories move the world at the same time they explain our place in it. They help us understand ourselves and those near to us. Never treat a story as a shallow, wan little thing. 2. We love to be entertained. 3. Segmentation. 4. Story is also not a square peg jammed in a circle hole. 5. You put your hand in a whirling clod of wet clay, you’re shaping it. 6. A story is so much more than the thing you think it is. 7. The storyteller will find no original plots. 8. The audience wants to feel connected to the story. 9. The audience isn’t stupid. 10. Conflict is the food that feeds the reader. 11. 12. It’s not just tension. 13. The story you tell should be the story you tell. 14. The audience cannot relate to big ideas. 15. 16. 17. 18. 19. 20. 21. 22.

25 Things Every Writer Should Know An alternate title for this post might be, “Things I Think About Writing,” which is to say, these are random snidbits (snippets + tidbits) of beliefs I hold about what it takes to be a writer. I hesitate to say that any of this is exactly Zen (oh how often we as a culture misuse the term “Zen” — like, “Whoa, that tapestry is so cool, it’s really Zen“), but it certainly favors a sharper, shorter style than the blathering wordsplosions I tend to rely on in my day-to-day writing posts. Anyway. Peruse these. Setting: Using Scene To Enrich Your Writing In both fiction and nonfiction, the setting is the general background against which your story takes place—the physical location and time period, both of which influence your characters and plot. So how can a creative writer use setting and scenery to further offset, augment, or reflect the action of the plot? Although we’re going to be exploring this issue in terms of fiction, these techniques work for nonfiction as well. These craft techniques work in all genres: poetry, stories, personal essays, memoir, and books. Suppose you’re writing a novel that is set in the Deep South in 1955 and your protagonist is an immigrant facing prejudice and roadblocks at every turn.

WordCount rerun: Harry Potter and J.K. Rowling's writing style With the opening of the movie, Harry Potter and the Deathy Hallows, Part 1, I’ve noticed a substantial increase in the number of people coming here to read a post I did last year about J.K. Rowling’s writing style. For those of you who didn’t see it the first time, I’m re-running a slightly modified version of the original today to make it easier to find. If you’ve read it before, maybe you’ll find some new meaning in it after seeing the movie. If you’ve read the books and seen “Happy Potter and the Deathy Hallows Part I,” how did the movie’s script compare with the writing in the book? Was it better, worse, or just different?

(More) tips for writing well (Austin Govella at Thinking and Making) Published Wed, Jul 8, 2009 by Austin Govella. Updated Wed, Jul 8, 2009. As an editor, I’ve noticed several recurring bad habits you heathens would do well to disabuse yourselves of immediately. Almost without exception, these bad habits instantiate themselves as a series of stock phrases and constructions that reflect a lack of focus, a lack of fully developed argument, or the kind of intellectual laziness that sets in as you slog through your first draft.

Michel Foucault: “What is an Author?” What is an Author? (1969) To read Michel Foucault, is to feel the grounds of one’s belief systems shift underneath one’s feet. For Foucault, as for Roland Barthes (1916-1980), the notion of the author must come into question. Although Foucault was not a literary theorist, he, like Barthes, was a theorist of history, and “What is an Author?” Entertainment: The Blog - How to Write Like J.K. Rowling - The Breakdown of Harry Potter As we continue our examination on effective storytelling, we cannot overlook the phenomenon that is Harry Potter. First published in 1997, the robust series of young adult books has transcended itself into the hands of old adults and onto the big screen, becoming the highest grossing film franchise of all time. Author J.K. Rowling's manner of writing aids the digestibility of her stories. Like the pop music of literature, she utilizes carefully produced and interwoven plot lines. Sentences are flowing — almost poetic — and thus lend themselves to silver screen transfer.