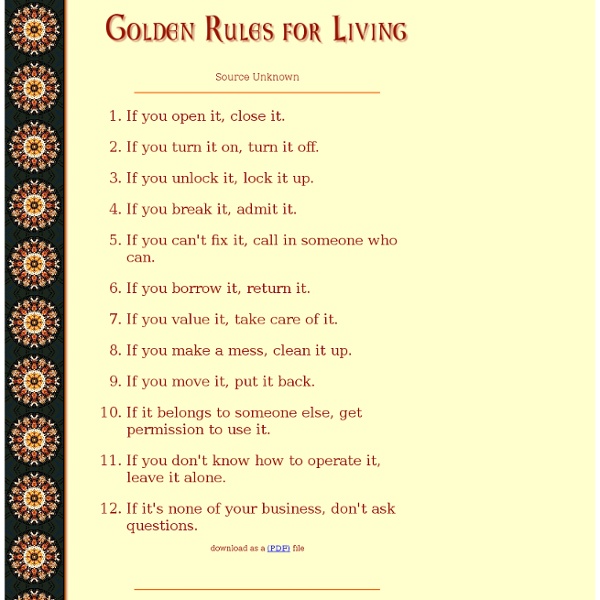 A Compilation of Vintage Textures for Designers Resources June 10, 2010 Textures are one of the most used resources in making great designs. They can accentuate your images to better portray the feel of the design you’re aiming for. Vintage textures, for instance, can add a classic or nostalgic touch to your work. Here at You the Designer, you need not blast to the past to get this brilliant effect. How To Train Yourself To Be In The Mood You Want Dec 27, 2010 When you have major changes going on in your life, or you’re just frustrated about where you are, it’s easy to get trapped in a cycle of depression, bad moods and frustration. I know, I’ve been there … and when I’m not careful, I still get there more than I want to. But when I’ve had a particularly hard time, I hit these moments where I’m in a foul mood, or I’m just feeling paralyzed, and I’m just stuck. Sometimes I just stew in that and stay there, but sometimes I actually get intelligent and pull my way out of it. I’m going to outline the framework that I’ve been using successfully to really get myself resourceful and motivated (and in a better mood) when I’m feeling stuck.

7 Habits of Highly Effective People In his #1 bestseller, Stephen R. Covey presented a framework for personal effectiveness. The following is a summary of the first part of his book, concluding with a list of the seven habits. Inside-Out: The Change Starts from Within While working on his doctorate in the 1970's, Stephen R. Covey reviewed 200 years of literature on success. Infant dies after being raped; mother encouraged the attack and watched - Detroit Crime A mother is under arrest after allegedly allowing her boyfriend to rape her infant child, causing the child to die. Jessica Lynn Howell, 25, of St. Charles County, Missouri, was arrested in connection with the death of her four-month-old daughter, Ashlynn Lilith Peters. Ashlynn died December 3, 2012. Originally Howell was not charged as she claimed innocence in the attack, but prosecutors say text messages between Howell and her boyfriend Jordan Lafayette Prince are conclusive and damning.

100 Ways to Simplify Your Life (and Make Yourself Happier) I’ve been striving to simplify my life for many years now, and have recently (through my writing) been advising others how to do the same. In the process, I’ve learned that making little changes in our attitudes, habits, and environment can have a big impact. So today, I thought I’d compile a list of 100 ways to simplify your life – from the practical to the philosophical, and everything in between. Of course, not every item on the list will work for every person reading it.

25 Quotes on Humor Humor really is our saving grace, and it helps keep us psychologically healthy. 25 Quotes on Humor - Part 2 can be found here: Part 2 "Laugh as much as possible, always laugh. It's the sweetest thing one can do for oneself & one's fellow human beings." - Maya Angelou "A good laugh makes any interview, or any conversation, so much better." - Barbara Walters Mnemonics and memory improvement / How to remember Languages and vocabulary Consider that for some reason you decide to learn a new language. Now there could be a number of good reasons why you might want to do such a thing. Maybe you are interested in a particular country or culture, and believe that learning the local dialect will aid your understanding of the people. Or (which is more likely) maybe you are just someone who is planning a holiday abroad, and doesn’t want to be constantly embarrassed because you have to spend minutes at a time flicking through a phrase book whenever you need to know the price of an item in a shop, or a drink in the bar.