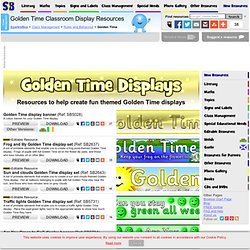 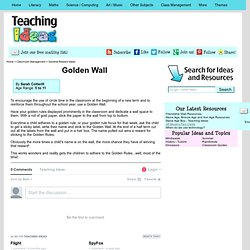 Have your golden rules displayed prominently in the classroom and dedicate a wall space to them. With a roll of gold paper, stick the paper to the wall from top to bottom. Everytime a child adheres to a golden rule, or your golden rule focus for that week, ask the child to get a sticky label, write their name and stcik to the Golden Wall.

At the end of a half term cut out all the labels from the wall and put in a hat/ box. Obviously the more times a child's name is on the wall, the more chance they have of winning that reward! This works wonders and reallly gets the children to adhere to the Golden Rules...well, most of the time! What are your favourite golden time activities? - TES Primary - Forum. 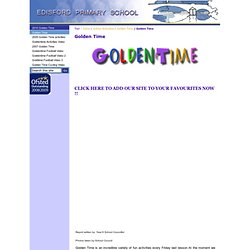 Not just that! We also have knitting, dressing up, cycling, drama, ----- and even more rainbow games, jewellery making, beauty treatments, playdo modeling and!!! -----, mask making. Our school council can make choices for Golden Time and discuss them in school council meetings. When I interviewed Mr. In Spring and Summer we make use of our extensive school grounds for Golden Time. ( We have the largest primary-school grounds in the Ribble Valley. ) But don't just take my word for it! I also interviewed a few of the children here are three typical replies: "I think Golden Time is really good because everybody is always involved".