Win Server 2008 R2 File Sharing. From Techotopia Purchase and download the full PDF and ePub versions of this eBook for only $9.99 Given that Windows Server 2008 is a server operating system it is not surprising that a primary function of this operating system is to serve files to users on other systems on a network. 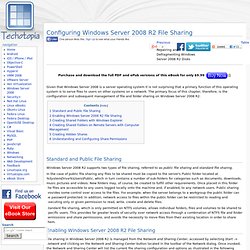 The primary focus of this chapter, therefore, is the configuration and subsequent management of file and folder sharing on Windows Server 2008 R2. [edit] Standard and Public File Sharing Windows Server 2008 R2 supports two types of file sharing, referred to as public file sharing and standard file sharing. In the case of public file sharing any files to be shared must be copied to the server's Public folder located at %SystemDrive%\Users\Public, which in turn contains a number of sub-folders for categories such as documents, downloads, music pictures and videos.

Standard file sharing, which is only permitted on NTFS volumes, allows individual folders, files and volumes to be shared to specific users. When Wireless LANs Collide: How To Beat The Wireless Crowd. Thu, 24 Jun 2010 11:47 Tim Higgins Introduction Wireless networks are wonderful things - when they work! 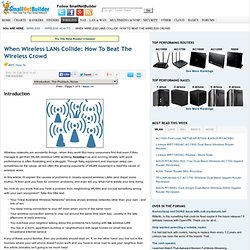 But many consumers find that even if they manage to get their WLAN (wireless LAN) working, keeping it up and running reliably with good performance is often frustrating and a struggle. Though flaky equipment and improper setup can sometimes be the cause, all too often the growing popularity of WLAN equipment is itself the cause of wireless woes. In this article, I'll explain the causes of problems in closely-spaced wireless LANs (and dispel some myths). So, how do you know that you have a problem from neighboring WLANs and not just something wrong with your own equipment? If any of these sound familiar, then you probably should read on. NOTE: Please read references to access points (AP) or wireless routers as applicable to both kinds of products unless otherwise noted. 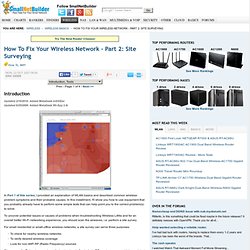 In this installment, I'll show you how to use equipment that you probably already have to perform some simple tests that can help point you to the correct problem(s) to solve. To uncover potential issues or causes of problems when troubleshooting Wireless LANs and for an overall better Wi-Fi networking experience, you should scan the airwaves, i.e. perform a site survey. For small residential or small-office wireless networks, a site survey can serve three purposes: To check for nearby wireless networks To verify desired wireless coverageLook for non-WiFi RF (Radio Frequency) sources Site surveys for Enterprises can be quite involved and often include RF spectrum scans, which can detect non Wi-Fi RF interference. VLAN How To: Segmenting a small LAN. Wed, 20 Jun 2007 20:00 Doug Reid Introduction What is a VLAN? 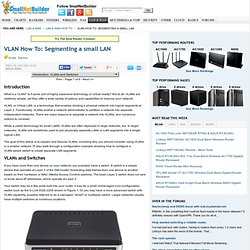 Is it some sort of highly expensive technology or virtual reality? Not at all. VLANs are relatively simple, yet they offer a wide variety of options and capabilities to improve your network. VLAN, or Virtual LAN, is a technology that enables dividing a physical network into logical segments at Layer 2. While a useful technology for small LANS, VLANs are often deployed in large networks, too. The goal of this article is to explain and discuss VLANs, including why you should consider using VLANs in a smaller network. VLANs and Switches If you have more than one device on your network, you probably have a switch.

Your switch may be a few ports built into your router, it may be a small unmanaged (non-configurable) switch such as the D-Link DGS-2205 shown in Figure 1. Figure 1: D-Link switch without VLAN capability As stated, switches pass data from one device to another based on their MAC addresses. Transporter - How to relocate the Connected Desktop cache. Knowledgebase. Knowledgebase. UniFi - How do I backup my controller configuration? - Ubiquiti Networks Community.