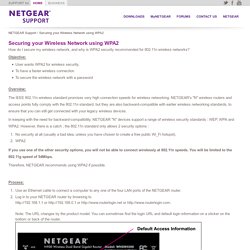 NETGEAR's "N" wireless routers and access points fully comply with the 802.11n standard, but they are also backward-compatible with earlier wireless networking standards, to ensure that you can still get connected with your legacy wireless devices. In keeping with the need for backward-compatibility, NETGEAR "N" devices support a range of wireless security standards : WEP, WPA and WPA2. However, there is a catch ; the 802.11n standard only allows 2 security options : No security at all (usually a bad idea, unless you have chosen to create a free public Wi_Fi hotspot).WPA2 If you use one of the other security options, you will not be able to connect wirelessly at 802.11n speeds. Therefore, NETGEAR recommends using WPA2 if possible.

Process: Enter the username (admin) and password. DreamHost : Login. Computer Ports - Learn The Name and Location of the Connections on your Desktop Computer or Laptop. For those of you who do not know what the connectors or connections on the back of your computer are called or where they are located… We have created a number of Computer Port Charts and other computer peripheral charts to help you identify the common connectors and ports on the back of your desktop computer or laptop. 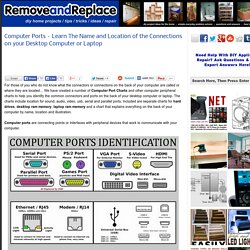 The charts include location for sound, audio, video, usb, serial and parallel ports. Included are separate charts for hard drives, desktop ram memory, laptop ram memory and a chart that explains everything on the back of your computer by name, location and illustration. Computer ports are connecting points or interfaces with peripheral devices that work to communicate with your computer. Computer Ports Identification Chart Most Common PHYSICAL computer ports: - USB Port (Universal Serial Bus): Created in the mid 1990’s to standardize communications between computers and peripheral devices. 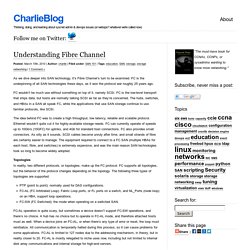 FC is the underpinning of all SAN technologies these days, as it won the protocol war roughly 25 years ago. FC wouldn’t be much use without something on top of it, namely SCSI. FC is the low-level transport that ships data, but hosts are normally talking SCSI as far as they’re concerned. The hubs, switches, and HBAs in a SAN all speak FC, while the applications that use SAN storage continue to use familiar protocols, like SCSI. The idea behind FC was to create a high throughput, low latency, reliable and scalable protocol. Topologies In reality, two different protocols, or topologies, make up the FC protocol.

FC-AL operation is quite scary, but sometimes a device doesn’t support FC-SW operations, and there’s no choice. The bulk of FC is really in FC-2. In a Nutshell: 3 Comments » ZeroTier One. Home networking explained, part 9: Access your home computer remotely. Editors' note: This post is part of an ongoing series. 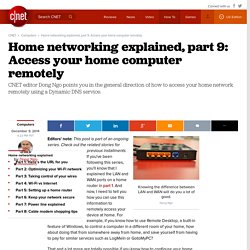 Check out the related stories for previous installments. If you've been following this series, you'll know that I explained the LAN and WAN ports on a home router in part 1. And now, I need to tell you how you can use this information to remotely access your device at home. For example, if you know how to use Remote Desktop, a built-in feature of Windows, to control a computer in a different room of your home, how about doing that from somewhere away from home, and save yourself from having to pay for similar services such as LogMeIn or GotoMyPC? That and a lot more are totally possible if you know how to configure your home router. WAN stands for Wide Area Network and is the IP address given to you by the Internet service provider.

Note: it's IPv4 that I'm talking about here. In order for each device, such as a computer, to connect to the router (and from there the Internet) it has to have an IP address of its own. Dynamic DNS. 5 things you didn't know you could do with your router. How Domain Name Servers Work" If you've ever used the Internet, it's a good bet that you've used the Domain Name System, or DNS, even without realizing it. 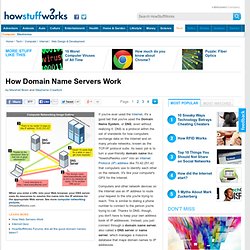 DNS is a protocol within the set of standards for how computers exchange data on the Internet and on many private networks, known as the TCP/IP protocol suite. Its basic job is to turn a user-friendly domain name like "howstuffworks.com" into an Internet Protocol (IP) address like 70.42.251.42 that computers use to identify each other on the network. It's like your computer's GPS for the Internet. Computers and other network devices on the Internet use an IP address to route your request to the site you're trying to reach.