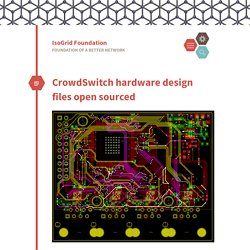 See The main change to the HW design is that the XMOS IsoSwitch is now fully driven (including a per-boot firmware download) by an external SoC via Ethernet (rather than an onboard SoC via SPI). This allows more flexibility in HW selection and means we can get started building a prototype CrowdSwitch earlier because we don’t need to worry about choosing the perfect SoC. Another change is to include an xSYS 3.0 header on the board to allow flashing the XMOS chip’s OTP with a bootloader that can load the FW from the SoC via Ethernet. xSYS also allows JTAG debugging I’ve completed component selection, HW schematics, and a proposed PCB Layout. Much of the design was lifted from the xCORE-200 SliceKit examples. An Introduction to Antenna Basics. Online investigation tool - IP, DNS, MX, WHOIS and SEO tools.

Advantages disadvantages of using Proxy vs VPN vs TOR vs TOR and VPN together. - blackMORE Ops. What makes you truly anonymous and leaves next to no trace in the internet? 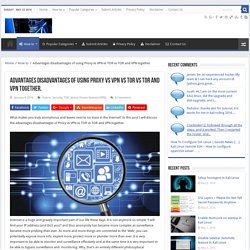 In this post I will discuss the advantages disadvantages of Proxy vs VPN vs TOR vs TOR and VPN together. Internet is a huge and gravely important part of our life these days. It is not anymore so simple “I will find your IP address (and DoS you)” and thus anonymity has became more complex as surveillance became more probing than ever. Rate limiting a single host or netmask.

Although this is described in stupendous details elsewhere and in our manpages, this question gets asked a lot and happily there is a simple answer that does not need full comprehension of traffic control. 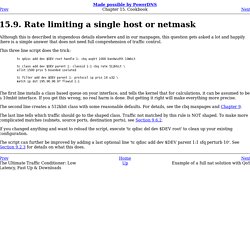 This three line script does the trick: tc qdisc add dev $DEV root handle 1: cbq avpkt 1000 bandwidth 10mbit tc class add dev $DEV parent 1: classid 1:1 cbq rate 512kbit \ allot 1500 prio 5 bounded isolated tc filter add dev $DEV parent 1: protocol ip prio 16 u32 \ match ip dst 195.96.96.97 flowid 1:1 The first line installs a class based queue on your interface, and tells the kernel that for calculations, it can be assumed to be a 10mbit interface. If you get this wrong, no real harm is done. But getting it right will make everything more precise. The second line creates a 512kbit class with some reasonable defaults. 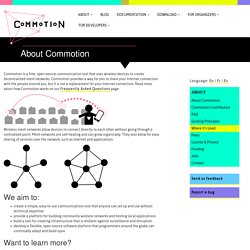 Mesh networks are self-healing and can grow organically. They also allow for easy sharing of services over the network, such as Internet and applications. We aim to: Want to learn more? Learn more about where Commotion is being tested. Feel free to contact us. Commotion is led by the Open Technology Institute. ESP8266 WiFi Throwies. A few years ago, someone figured out you can take an LED, a coin cell battery, and a magnet, tape them together, and throw them on every conceivable metallic surface. 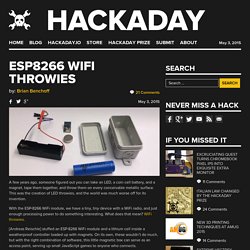 This was the creation of LED throwies, and the world was much worse off for its invention. With the ESP-8266 WiFi module, we have a tiny, tiny device with a WiFi radio, and just enough processing power to do something interesting. What does that mean? WiFi throwies. 16+ Projects & Initiatives Building Ad-Hoc Wireless Mesh Networks. How To Set Up An Open Mesh Network in Your Neighborhood. Mesh networks can share web connections throughout a neighborhood, spreading the reach of a broadband connection. 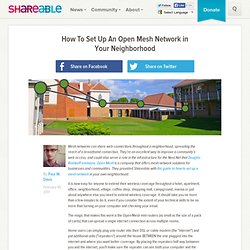 They're an excellent way to improve a community’s web access, and could also serve a role in the infrastructure for the Next Net that Douglas Rushkoff envisions. Open Mesh is a company that offers mesh network solutions for businesses and communities. They provided Shareable with this guide to how to set up a mesh network in your own neighborhood. It is now easy for anyone to extend their wireless coverage throughout a hotel, apartment, office, neighborhood, village, coffee shop, shopping mall, campground, marina or just about anywhere else you need to extend wireless coverage. It should take you no more than a few minutes to do it, even if you consider the extent of your technical skills to be no more than turning on your computer and checking your email.

Village Telco » Mesh Potato. Mesh Potato Click for larger view The Mesh Potato is a device for providing low-cost telephony and Internet in areas where alternative access either doesn’t exist or is too expensive. 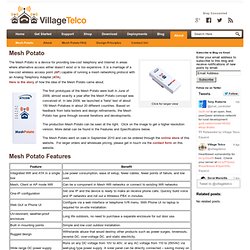 It is a marriage of a low-cost wireless access point (AP) capable of running a mesh networking protocol with an Analog Telephony Adapter (ATA).Here is the story of how the idea of the Mesh Potato came about. The first prototypes of the Mesh Potato were built in June of 2009, almost exactly a year after the Mesh Potato concept was conceived of. In late 2009, we launched a “beta” test of about 150 Mesh Potatoes in about 20 different countries. UniverseOS. Home. Overview and download of the free anonymizer. SoftEther VPN Project - SoftEther VPN Project. Hide.me: World's fastest VPN and Privacy Protection. Olive - Free Access to All of the Internet.