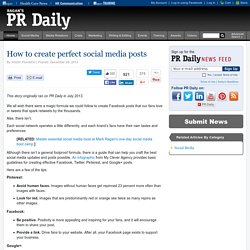 We all wish there were a magic formula we could follow to create Facebook posts that our fans love or tweets that spark retweets by the thousands. Alas, there isn’t. Each social network operates a little differently, and each brand’s fans have their own tastes and preferences. Social media image dimensions 2014: the complete guide for Facebook, Twitter and Google +   (UPDATED! 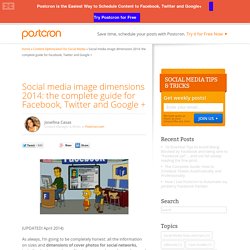 April 2014) As always, I’m going to be completely honest: all the information on sizes and dimensions of cover photos for social networks, including backgrounds, profile pictures, etc. have changed several times. So, the infographics prepared for 2014 were basically rendered obsolete overnight. In November 2013, Google Plus launched its latest change and just recently, in January 2014, Twitter changed the design of the users’ homepage. Even, at this exact moment, they’re preparing a new surprise for us all.

The goal of this article isn’t only to present you with cold hard data about social media image dimensions, but to also give you practical advice to optimize your brand strategy, and improve its image throughout different social networks. 1- Twitter’s cover dimensions – Updated April 2014 – (+tips!) The new Twitter has arrived!! The Ultimate Guide to Mobile Social Media. 129 Flares Filament.io 129 Flares × I spend my days writing content from my desktop computer for people who will read the content on their smartphones and tablets. 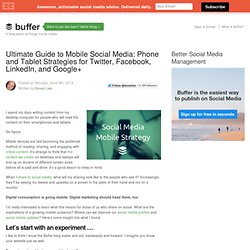 Go figure. Mobile devices are fast becoming the preferred method of reading, sharing, and engaging with online content. It’s strange to think that the content we create on desktops and laptops will end up on dozens of different screen sizes before all is said and done. It’s a good lesson to keep in mind. Participation Inequality: Encouraging More Users to Contribute. Is the 90-9-1 Rule for Online Community Engagement Dead? [Data]

Is the 90-9-1 Rule for Online Community Engagement Dead? 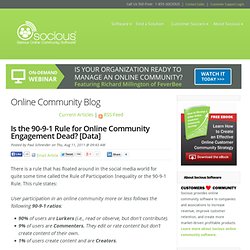 [Data] Posted by Paul Schneider on Thu, Aug 11, 2011 @ 09:43 AM There is a rule that has floated around in the social media world for quite some time called the Rule of Participation Inequality or the 90-9-1 Rule. This rule states: User participation in an online community more or less follows the following 90-9-1 ratios: 90% of users are Lurkers (i.e., read or observe, but don't contribute).9% of users are Commenters. This rule gives both hope and discouragement to organizations that are creating online communities. Having heard this rule for years and seeing what I suspected were higher levels of participation in our customers’ online communities, I began to ask myself if the rule is really true.

How Users Read on the Web. Formspring. Damsels.org. Foodspotting - Find and recommend dishes, not just restaurants. The Fitness Social Network To Level Up In Real Life. Thumb. How your favourite social network sites are using your data. Small world experiment. The "six degrees of separation" model The small-world experiment comprised several experiments conducted by Stanley Milgram and other researchers examining the average path length for social networks of people in the United States. 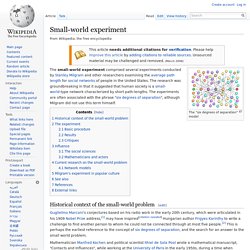 The research was groundbreaking in that it suggested that human society is a small-world-type network characterized by short path-lengths. The experiments are often associated with the phrase "six degrees of separation", although Milgram did not use this term himself. Historical context of the small-world problem[edit] Mathematician Manfred Kochen and political scientist Ithiel de Sola Pool wrote a mathematical manuscript, "Contacts and Influences", while working at the University of Paris in the early 1950s, during a time when Milgram visited and collaborated in their research. Milgram's experiment was conceived in an era when a number of independent threads were converging on the idea that the world is becoming increasingly interconnected.

Results[edit] Beyond Facebook: The Rise Of Interest-Based Social Networks. Editor’s Note: This guest post is written by Jay Jamison, a Partner at BlueRun Ventures, who focuses on early stage mobile, consumer and enterprise investments. He also serves on the boards of AppCentral, AppRedeem, Foodspotting, and Thumb. You can follow Jay on Twitter @jay_jamison or read his blog at www.jayjamison.com. With the pending public offering of Facebook anticipated to be the largest tech IPO in history, it’s an interesting time to think about where we go from here. Here's Why Google and Facebook Might Completely Disappear in the Next 5 Years.

Netlog. Entrecard, The Droppers How To : Lobo Links Blog. This sort of feel like it will be a long post, but I really don’t want you skimming. 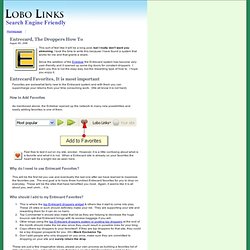 I took the time to write this because I have found a system that works for me and that grants a share. Since the addition of the Entrebar the Entrecard system has become very user-friendly and it opened up some big doors for constant droppers. I warn you this is not the easy way, but the rewarding type of how to. I hope you enjoy it. Entrecard Favorites, It is most important Favorites are somewhat fairly new to the Entrecard system and with them you can supercharge your returns from your time consuming work. How to Add Favorites As mentioned above, the Entrebar opened up the network to many new possibilities and easily adding favorites is one of them. Orkut.