Turn an Old PC Into a NAS, VPN, Media Streamer, and More with Amahi. Five free network analyzers worth any IT admin's time. If you work on a network, you then know the value of information. 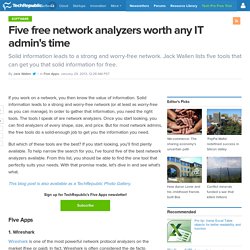 Solid information leads to a strong and worry-free network (or at least as worry-free as you can manage). In order to gather that information, you need the right tools. The tools I speak of are network analyzers. Once you start looking, you can find analyzers of every shape, size, and price. But for most network admins, the free tools do a solid-enough job to get you the information you need. But which of these tools are the best? This blog post is also available as a TechRepublic Photo Gallery. Five Apps 1. Wireshark is one of the most powerful network protocol analyzers on the market (free or paid). NAST (Network Analyzer Sniffer Tool) is an ncurses-based tool that has, admittedly, not been under development for quite some time. 3. Zenmap is the official GUI for the Nmap Security Scanner. 4. Network LAN TS2. 6 free network vulnerability scanners. Though you may know and follow basic security measures on your own when installing and managing your network and websites, you'll never be able to keep up with and catch all the vulnerabilities by yourself. 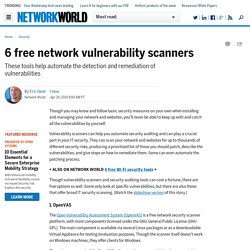 Vulnerability scanners can help you automate security auditing and can play a crucial part in your IT security. They can scan your network and websites for up to thousands of different security risks, producing a prioritized list of those you should patch, describe the vulnerabilities, and give steps on how to remediate them. Some can even automate the patching process. + ALSO ON NETWORK WORLD 8 free Wi-Fi security tools + Though vulnerability scanners and security auditing tools can cost a fortune, there are free options as well. 1. 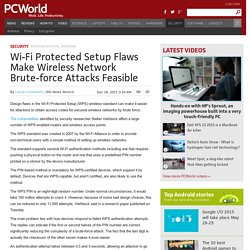 The vulnerabilities identified by security researcher Stefan Viehbock affect a large number of WPS-enabled routers and wireless access points. The WPS standard was created in 2007 by the Wi-Fi Alliance in order to provide non-technical users with a simple method of setting up wireless networks. The standard supports several Wi-Fi authentication methods including one that requires pushing a physical button on the router and one that uses a predefined PIN number printed on a sticker by the device manufacturer. The PIN-based method is mandatory for WPS-certified devices, which support it by default. Devices that are WPS-capable, but aren't certified, are also likely to use the method.

The WPS PIN is an eight-digit random number. The main problem lies with how devices respond to failed WPS authentication attempts. The U.S. Working with Open Shortest Path First (OSPF) Routing Protocol. Because Open Shortest Path First (OSPF) is an open standard protocol, many people have contributed to its design and thousands upon thousands of people have reviewed it. 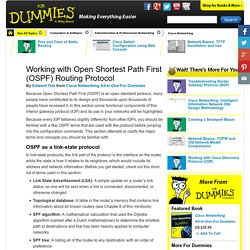 In this section,some functional components of this interior gateway protocol (IGP) and its use in your networks will be highlighted. Because every IGP behaves slightly differently from other IGPs, you should be familiar with a few OSPF terms that are used with the protocol before jumping into the configuration commands. This section attempts to clarify the major terms and concepts you should be familiar with. OSPF as a link-state protocol In link-state protocols, the link part of the protocol is the interface on the router, while the state is how it relates to its neighbors, which would include its address and network information. Security. 80+ Best Free Hacking Tutorials. Learning to become hacker is not as easy as learning to become a software developer. I realized this when I started looking for learning resources for simple hacking people do.

Even to start doing the simplest hack on own, a hacker requires to have in depth knowledge of multiple topics. Some people recommend minimum knowledge of few programming languages like C, Python, HTML with Unix operating system concepts and networking knowledge is required to start learning hacking techniques. Though knowing a lot of things is required, it is not really enough for you to be a competent and successful hacker.

You must have a passion and positive attitude towards problem solving. How To Become A Hacker. Copyright © 2001 Eric S. 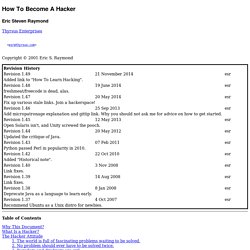 Raymond As editor of the Jargon File and author of a few other well-known documents of similar nature, I often get email requests from enthusiastic network newbies asking (in effect) "how can I learn to be a wizardly hacker? ". Back in 1996 I noticed that there didn't seem to be any other FAQs or web documents that addressed this vital question, so I started this one. A lot of hackers now consider it definitive, and I suppose that means it is. Still, I don't claim to be the exclusive authority on this topic; if you don't like what you read here, write your own.

If you are reading a snapshot of this document offline, the current version lives at Note: there is a list of Frequently Asked Questions at the end of this document. Numerous translations of this document are available: ArabicBelorussianChinese, Danish, Dutch, Estonian, FrenchGerman, GreekItalianHebrew, Japanese, Lithuanian, Norwegian, PersianPortuguese (Brazilian), RomanianSpanish, Turkish, and Swedish. Top 100 Network Security Tools.