Frightened Rabbit fight back at trolls with brilliant t-shirt. Photo: Justine Trickett Frightened Rabbit have responded to the mindless berating of an internet troll in typical classy style - by turning their hatred into an awesome t-shirt. 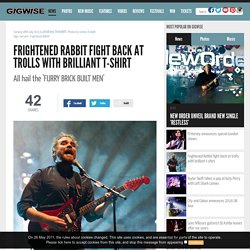 The Gigwise favourites and future festival headliners are currently working on the follow-up to 2013's brilliant Pedestrian Verse, but found themselves interrupted after receiving scores of bizarre criticism from an internet troll who slammed them as 'meat eaters fatties', 'furry brick built men', 'ugly fat ass man', being 'built like a cruise ship' and encouraging them to 'get caught in a housefire'. Fortunately, frontman Scott Hutchison is a talented artist with a thick skin and a sense of humour, turning the scorn into a t-shirt emblazoned with 'FURRY BRICK BUILT MEN: UGLY, HAIRY AND BUILT LIKE A CRUISE SHIP SINCE 2004'. Check it out below. Man jailed after using explicit images of ex-wife in £2m blackmail bid. A British man who married the daughter of an American billionaire has been jailed for 12 years after plotting to extort £2m from the family by posting sexually explicit photos of her online. 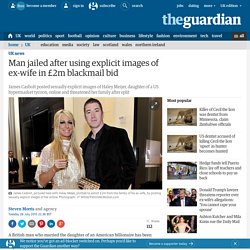 James Casbolt, 37, from St Ives in Cornwall, demanded the sum in exchange for not sharing intimate pictures of Haley Meijer following an acrimonious split. He also sent threatening texts and emails to Meijer, the daughter of the American hypermarket tycoon Hank Meijer, and posted bizarre, unfounded claims about her online. Casbolt once wrote to her: “If my terms are not met, I can tickle the public interest for years, until the Meijers are so infamous in the world they will not be able to walk down the streets safely.”

In another he said: “If you are living with another guy, you just gave him a death sentence” and threatened to send suicide bombers to her parents’ home. Jailing Casbolt for 12 years at Truro crown court, Judge Christopher Harvey-Clarke described him as an “extremely dangerous man’’. Heather Watson defiantly slams 'cowardly' social media abuse. The British No 1 tennis player Heather Watson has hit back at the “cowards” who have sent her death threats on social media. 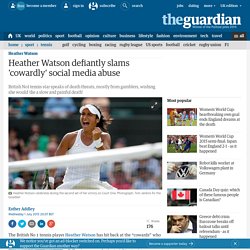 Following an emphatic straight sets victory over the former world No 5 Daniela Hantuchova, Watson said trolling messages had become such a usual occurrence that she had stopped checking her social media accounts, but that the abuse usually came from gamblers, “because you either win or lose them money”. The 23-year-old made the comments in her post-match press conference, expanding on comments she made to the New York Times earlier this week, in which she said: “I’ve had death threats.

I’ve had people threatening to kill me and kill my family, wishing that I get cancer and die a slow, painful death. Horrible words I couldn’t even think up in my head, to be that mean.” Unfriended review: a Blair Witch for the broadband era. Singaporean tourist dies in Bali after falling from cliffs while taking selfie. A Singaporean man has died after falling off a cliff and into the sea while attempting to take a selfie on an island off the coast of Bali in Indonesia. 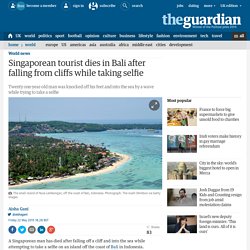 Mohamed Aslam Shahul, 21, was killed after losing his balance and falling into the sea from a two-metre high cliff, during a holiday with eight friends at the Sandy Bay Beach in Nusa Lembongan. The news of his death emerged as another selfie-related incident was reported in Russia today, after a young woman accidentally shot herself in the head while taking a photograph of herself. The 21-year-old was said to have been posing while pointing a 9mm handgun to her head. She had found the gun at her Moscow office left behind by a security guard, police spokesman told Interfax news agency. How to embrace loneliness: a modern guide. Loneliness can creep through your bones like a disease, wash over you unexpectedly as if a stranger’s vomit, or sit in the pit of your stomach for weeks like undigested chewing gum. 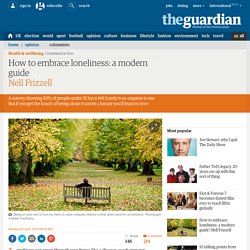 Especially, it turns out, if you’re young. A survey carried out by Opinium for The Big Lunch has found that 83% of 18- to 34-year-olds have experienced the dull, quiet ache of being lonely, which is no surprise to me. Of course it’s easy to be lonely in your 20s. You may sit in an office of 50 people, but if you email your colleagues rather than exchange gossip over tea in the communal kitchen then it’s hard to feel truly part of a group. When you eat lunch sitting at your desk, idly scanning through other people’s Facebook photos rather than chatting around a table about the canteen’s latest attempt at tex mex, you leave yourself open to the cold draught of loneliness.

Kick It Out calls for collective action on social media abuse towards players... An enormous volume of racist, homophobic, sexist and other discriminatory abuse of Premier League footballers and clubs on social media has been revealed in new research for the game’s anti-discrimination organisation, Kick It Out. 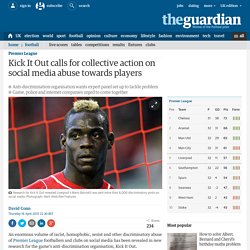 The search of Twitter, Facebook, supporters’ forums and blogs, using key abusive terms with players’ and club names, refined to identify direct abuse, found 134,400 discriminatory posts this season, from August 2014 to last month. The research has also highlighted the huge number of abusive posts received by some individual black players, finding that Mario Balotelli, of Liverpool, was sent more than 8,000 discriminatory posts on social media, of which more than half were racist. 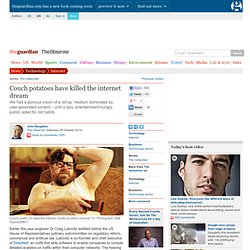 Labovitz is co-founder and chief executive of Deepfield, an outfit that sells software to enable companies to compile detailed analytics on traffic within their computer networks. The hearing was on the proposed merger of Comcast and Time Warner Cable and the impact it was likely to have on competition in the video and broadband market. In the landscape of dysfunctional, viciously partisan US politics, this hearing was the equivalent of rustling in the undergrowth, and yet in the course of his testimony Labovitz said something that laid bare the new realities of our networked world. 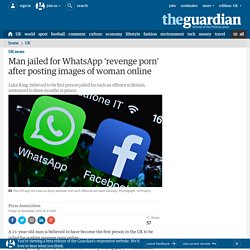 Luke King was given a 12-week sentence after pleading guilty to harassment without violence. He had published intimate images of a woman on the WhatsApp messaging service in August after making a series of threats to her, Southern Derbyshire magistrates court heard. King, of Aspley, Nottingham, was also issued with a restraining order, preventing him from contacting the woman. The Crown Prosecution Service (CPS) said the case was a reminder that such offences would be taken seriously. The east Midlands branch of the CPS, its district crown prosecutor, Peter Shergill, described the offence as vindictive, adding: “Prosecutors are now following guidance issued in October that clarifies how we can use existing legislation to prosecute perpetrators of these intrusive offences. Jessica Ennis-Hill receives rape threats over Ched Evans stance.

South Yorkshire police are investigating rape threats sent to Olympic gold medallist Dame Jessica Ennis-Hill after she said she would request the removal of her name from a stand at Sheffield United if it offers a new contract to convicted rapist Ched Evans. 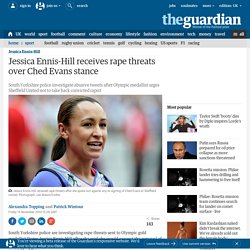 Ennis-Hill received the abuse on Twitter, with one tweet, sent from the handle @RickieLambert07 reading: “Jessica Ennis-Hill is a stupid cunt. Saying she will remove her name if Ched Evens [sic] is signed. I hope he rapes her.” Both the tweet and account were then deleted. Revealed: how pressures of online life undermine teenage girls’ self-esteem. The self-esteem of teenage girls has fallen significantly since the start of the economic downturn seven years ago and the boom in the use of social media and online communication, a major survey of 30,000 school pupils has revealed. 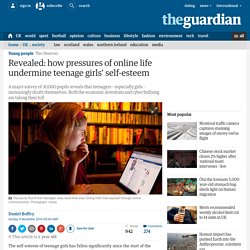 Analysts who compile the survey for schools across the country have reported a worrying drop in the number of 14- and 15-year-olds, particularly girls, who say they feel highly confident in their own worth. After consistent year-on-year increases since the early 1990s in the number of young people scoring in the highest bracket of self-esteem, a sudden and dramatic change occurred after 2007, according to the Schools Health Education Unit, which works with local authorities to monitor the health and lifestyles of pupils.

From a peak in 2007, when 41% of 14- and 15-year-old girls reported high self-esteem, that figure has fallen to 33%. Six types of killer use Facebook to commit crimes, says study. Researchers at Birmingham City University have identified six types of killer who use Facebook to commit crimes, in the first-ever study on how the social networking site can affect criminal behaviour. Dr Elizabeth Yardley and Prof David Wilson, from the university’s centre of applied criminology, analysed cases of murder in which the site had been reported as a significant factor. They found 48 examples from across the world, including that of Wayne Forrester, an HGV driver, who killed his wife Emma in 2008 after reading her Facebook posts in which she claimed that they had separated and she wanted to meet other men.

Silencing extreme views, even if they are those of internet trolls, is wrong ... No one has tested my commitment to liberalism so sorely as Edinburgh University’s Feminist Society. I know I should believe in freedom of speech and changing minds with arguments, not punishments, and all the rest of it. And, trust me, I do. Or rather I did, until the moment Edinburgh’s feminist students said they wanted to kick the Socialist Workers party out of their campus. Richard Madeley calls police after trolls threaten to rape Chloe Madeley. Richard Madeley has called in the police over Twitter trolls’ threats to rape his daughter Chloe Madeley. The vile threats come after Richard’s wife, Judy Finnigan, made comments on Loose Women this week appearing to defend convicted rapist Ched Evans.

A string of abusive tweets threatening to rape Chloe, 27, were posted but Richard has informed the faceless trolls that he has made a note of every tweet and is letting the police deal with it. He then retweeted two of his followers, one who told him they are in the police and the culprits ‘will be found’ and another who recommended he take screenshot of the ‘faceless trolls” comments. Judy sparked outrage on Twitter when she made the comments on Monday during her first appearance as a Loose Women panelist. Man jailed for antisemitic tweet to Labour MP. An internet troll accused of sending an antisemitic message to Labour MP Luciana Berger has been sentenced to four weeks in prison at Merseyside magistrates court.

Garron Helm, 21, from Litherland, north of Liverpool, tweeted a picture of the MP with a Holocaust yellow star superimposed on her forehead, with the hashtag “Hitler was right”. The tweet, which referred to Berger as a ‘‘communist jewess”, read: “You can always trust a Jew to show their true colours eventually.” Justice secretary Chris Grayling pledges stiffer sentences for internet troll... Internet trolls will face up to two years in jail under tough new laws proposed by justice secretary Chris Grayling. The previous maximum term of six months will be quadrupled under the plan to tackle the “cowards” who post abusive comments online. Grayling said the plan was a signal of his determination to “take a stand against a baying cyber-mob”. The move comes just days after the threats directed at Chloe Madeley after she stepped in to defend her mother Judy Finnigan’s controversial comments about footballer and convicted rapist Ched Evans.

The justice secretary told the Mail on Sunday: “These internet trolls are cowards who are poisoning our national life. Twitter's former security head condemns Whisper's privacy flaws. Irish-man-fined-1600-for-offensive-facebook-post-in-first-prosecution-of-its-... Remorseful Twitter and Facebook jokers less likely to face prosecution. Peter Nunn jailed for abusive tweets to MP Stella Creasy. Ello: the anti-Facebook meant to be private and pretty, but not this popular ... Stop complaining about the Facebook study. It's a golden age for research. We shouldn't expect Facebook to behave ethically.