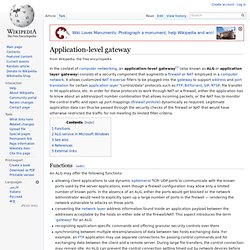 An ALG understands the protocol used by the specific applications that it supports. For instance, for Session Initiation Protocol (SIP) Back-to-Back User agent (B2BUA), an ALG can allow firewall traversal with SIP. If the firewall has its SIP traffic terminated on an ALG then the responsibility for permitting SIP sessions passes to the ALG instead of the firewall. An ALG is very similar to a proxy server, as it sits between the client and real server, facilitating the exchange. 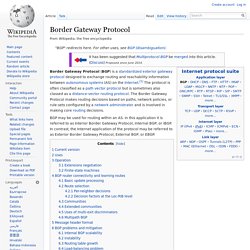 In this application it is referred to as Interior Border Gateway Protocol, Internal BGP, or iBGP. In contrast, the Internet application of the protocol may be referred to as Exterior Border Gateway Protocol, External BGP, or EBGP. Current version[edit] The current version of BGP is version 4 (BGP4) codified in RFC 4271 since 2006. Early versions of the protocol are widely considered obsolete and are rarely supported.[2] RFC 4271, which went through more than 20 drafts, is based on the earlier RFC 1771 version 4. Constraint-based Routing Label Distribution Protocol. Distance-vector routing protocol. In computer communication theory relating to packet-switched networks, a distance-vector routing protocol is one of the two major classes of routing protocols, the other major class being the link-state protocol. 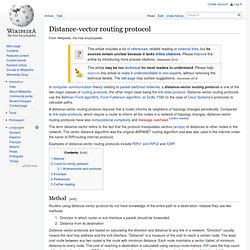 [citation needed] The term distance vector refers to the fact that the protocol manipulates vectors (arrays) of distances to other nodes in the network. Generic Routing Encapsulation. Example uses[edit] In conjunction with PPTP to create VPNs.In conjunction with IPsec VPNs to allow passing of routing information between connected networks.In Mobility protocols.In A8/A10 interfaces to encapsulate IP data to/from Packet Control Function (PCF).Linux and BSD can establish ad-hoc IP over GRE tunnels which are interoperable with Cisco equipment.Aruba Access Points use GRE tunnels to establish a connection with their respective Aruba Mobility Controller. 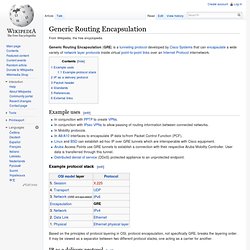 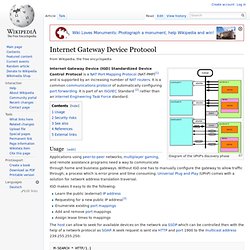 Without IGD one has to manually configure the gateway to allow traffic through, a process which is error prone and time consuming. Universal Plug and Play (UPnP) comes with a solution for network address translation traversal. IGD makes it easy to do the following: M-SEARCH * HTTP/1.1 Host:239.255.255.250:1900 ST:urn:schemas-upnp-org:device:InternetGatewayDevice:1 Man:"ssdp:discover" MX:3. P Router. Provider Edge. The term PE router covers equipment capable of a broad range of routing protocols, notably: PE routers do not need to be aware of what kind of traffic is coming from the provider's network, as opposed to a P Router that functions as a transit within the service provider's network. 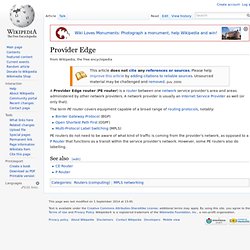 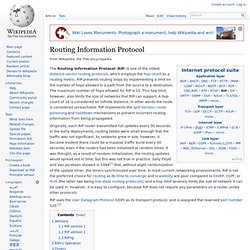 RIP prevents routing loops by implementing a limit on the number of hops allowed in a path from the source to a destination. The maximum number of hops allowed for RIP is 15. This hop limit, however, also limits the size of networks that RIP can support. A hop count of 16 is considered an infinite distance, in other words the route is considered unreachable. RIP implements the split horizon, route poisoning and holddown mechanisms to prevent incorrect routing information from being propagated. RIP uses the User Datagram Protocol (UDP) as its transport protocol, and is assigned the reserved port number 520.[2] Versions[edit] There are three versions of the Routing Information Protocol: RIPv1, RIPv2, and RIPng. RIP version 1[edit] The original specification of RIP, defined in RFC 1058,[3] was published in 1988 and uses classful routing. Router (computing) A typical home or small office router showing the ADSL telephone line and Ethernet network cable connections A Cisco ASM/2-32EM router deployed at CERN in 1987 A router (/ˈruːtə/ or (chiefly North American and Australian) /ˈraʊ-/, also /-ər/) is a networking device that forwards data packets between computer networks. 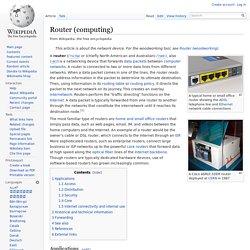 A router is connected to two or more data lines from different networks. When a data packet comes in one of the lines, the router reads the address information in the packet to determine its ultimate destination. Then, using information in its routing table or routing policy, it directs the packet to the next network on its journey. Routing (Puppylinux) Layer 3 Switch. Routing (unix & linux) Routing (IPv6 - Linux) Routers, Switches, Hubs & firewalls.