« What’s your story?” is infinitely more interesting than “What do you do? »

The Best Way to Network in a New Job. Social network. Social networks and the analysis of them is an inherently interdisciplinary academic field which emerged from social psychology, sociology, statistics, and graph theory. 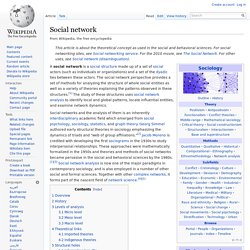 Georg Simmel authored early structural theories in sociology emphasizing the dynamics of triads and "web of group affiliations. "[2] Jacob Moreno is credited with developing the first sociograms in the 1930s to study interpersonal relationships. These approaches were mathematically formalized in the 1950s and theories and methods of social networks became pervasive in the social and behavioral sciences by the 1980s.[1][3] Social network analysis is now one of the major paradigms in contemporary sociology, and is also employed in a number of other social and formal sciences.

Together with other complex networks, it forms part of the nascent field of network science.[4][5] Overview[edit] History[edit] Levels of analysis[edit] Self-organization of a network, based on Nagler, Levina, & Timme, (2011)[32] Micro level[edit] In J.A. Is it Time to Unclutter Your Social Network? Social Relations. Reciprocity. Social Interactions. Closeness and Connection. Social Media. Email.

How to Bond. Do you have someone in your life that you really want to connect to but aren’t sure how? 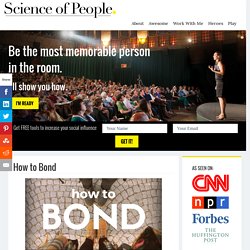 I want to give you some tools that will help you optimize your relationships and go from: Stranger to AcquaintanceColleagues to FriendsBuddy to ConfidantCrush to DateFriend to Best Friend. As you may know, sometimes we get stagnant in our relationships and aren’t quite sure how to get to the next level. In this video, I will show you techniques that will help you bond with anyone. Bonding Tips #1 Activities Bond There is something special about doing something new with someone. Remember: The more unique the activity, the more bonding you have. #2 Goals Bond. How to Become a Master at Networking. Humans are social creatures. 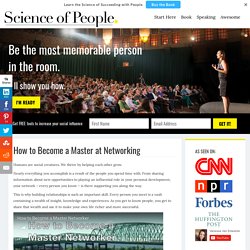 We thrive by helping each other grow. Nearly everything you accomplish is a result of the people you spend time with. From sharing information about new opportunities to playing an influential role in your personal development, your network – every person you know – is there supporting you along the way. This is why building relationships is such an important skill. Every person you meet is a vault containing a wealth of insight, knowledge and experiences. Having a large, diverse network is critical to success. This month we chose Never Eat Alone as our Science of People book club book to learn networking strategies from Keith Ferrazzi, a management consultant and one of the most well-connected people in the business world.

10 Ways To Rock A Networking Event. Imagine this: You’ve just walked into a crowded room full of strangers. 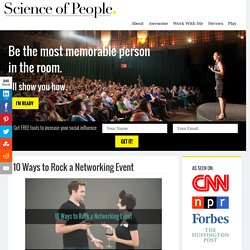 Your mission is to meet new people, make friends or pass out business cards. Go! This used to be my mission (and nightmare) every time I had to go to a networking event, party or group get together—and I would always end up wondering, “Why did I even come to this thing?” Networking events suck. Parties full of strangers suck. Here’s how you can rock a networking event: As a recovering awkward person, I figured out the art and science of hacking a networking event–and today I am going to share those tricks with you. 1.

I have an insider tip on name tags: Always, always look at other people’s name tags before filling out yours. 2. 10 Networking Tips That Will Make You A Success. Everyone needs to network. 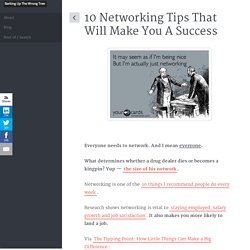 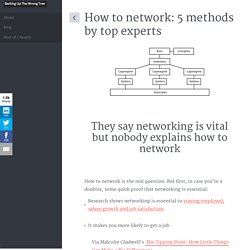 But first, in case you’re a doubter, some quick proof that networking is essential: Research shows networking is essential to staying employed, salary growth and job satisfaction.It makes you more likely to get a job. Via Malcolm Gladwell’s The Tipping Point: How Little Things Can Make a Big Difference: 7 Networking Hacks to Connect Better at Your Next Conference. Whether you have a job that entails regular conferences or you’re a freelancer who gets to work like a hermit, you’ll probably need to network at some point in your life. 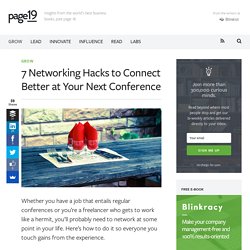 Here’s how to do it so everyone you touch gains from the experience. It’s an indisputable fact that personal contacts open doors. One classic study, outlined in the book Getting a Job, showed that among the 282 men surveyed, 56 percent had found their jobs through personal contacts, whereas only 19 percent had found theirs through job advertisements and 10 percent through applications of their own initiative. What have we learned here? Not that sending a cold job application is futile (though in this day and age, it sort of is), but that connecting with people professionally really matters. The problem is that most of us don’t actually like the chilly concept of networking. 1.

How to Use the Power of Surprise to Wow Your Clients. This is a guest post by my friend, Brad Johnson, a member of my Inner Circle Mastermind Group. 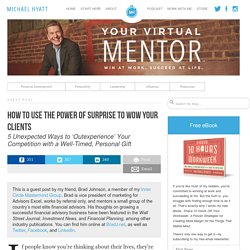 Brad is vice president of marketing for Advisors Excel, works by referral only, and mentors a small group of the country’s most elite financial advisors. His thoughts on growing a successful financial advisory business have been featured in the Wall Street Journal, Investment News, and Financial Planning, among other industry publications. You can find him online at BradJ.net, as well as Twitter, Facebook, and LinkedIn. If people know you’re thinking about their lives, they’re more likely to want to do business. Here’s a quick story of how I personally created a wow experience that might set the stage for how to pull this off in your practice.

Courtesy of iStock/Lepro Recently, I took a trip to Nashville, Tennessee, to meet with Michael’s Inner Circle Mastermind Group.