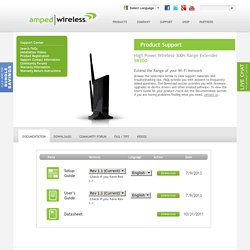 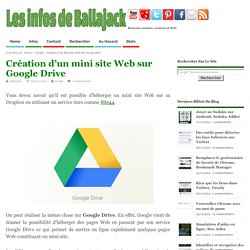 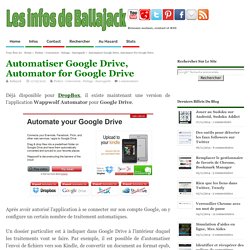 6 Tools That Make Collaboration Way Easier. It’s the question that pretty much everyone in business wants to know the answer to: How can we work better and faster? 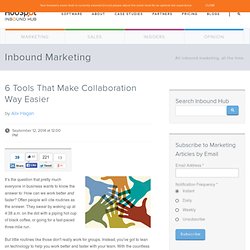 Often people will cite routines as the answer. They swear by waking up at 4:38 a.m. on the dot with a piping hot cup of black coffee, or going for a fast-paced three-mile run. But little routines like those don't really work for groups. Instead, you've got to lean on technology to help you work better and faster with your team. With the countless new apps designed to do just that, it can be hard to decide on which ones your team should use. Analyze & Optimize Your Wireless Network with Wi-Fi Analyzer for Android. Wi-Fi Analyzer for Android is the complete package. 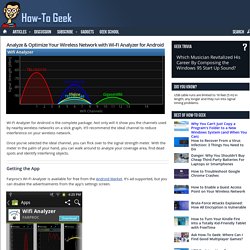 Not only will it show you the channels used by nearby wireless networks on a slick graph, it’ll recommend the ideal channel to reduce interference on your wireless network. Once you’ve selected the ideal channel, you can flick over to the signal strength meter. With the meter in the palm of your hand, you can walk around to analyze your coverage area, find dead spots and identify interfering objects. Getting the App. 10 Useful Options You Can Configure In Your Router’s Web Interface. Your wireless router has a variety of useful options you can configure. 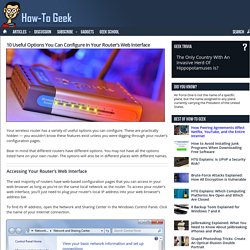 These are practically hidden — you wouldn’t know these features exist unless you were digging through your router’s configuration pages. Bear in mind that different routers have different options. How to Prevent Identity Thieves from Opening Accounts in Your Name (Especially after the Anthem Hack) The news that Anthem got hacked and 80 million people’s identities were stolen wasn’t very surprising — everybody is getting hacked these days. 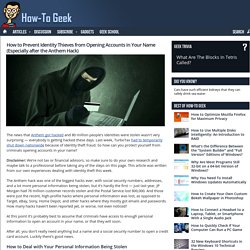 Last week, TurboTax had to temporarily shut down nationwide because of identity theft fraud. Weird bug alert: A simple xenon camera flash can crash a Raspberry Pi 2. The $35 Raspberry Pi 2 launched earlier this month sporting a wealth of upgrades and apparently, one of the most peculiar hardware bugs in recent memory. 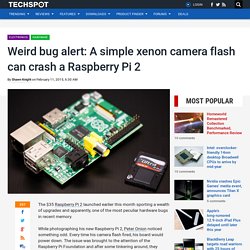 While photographing his new Raspberry Pi 2, Peter Onion noticed something odd. Every time his camera flash fired, his board would power down. The issue was brought to the attention of the Raspberry Pi Foundation and after some tinkering around, they figured out what is going on. The Raspberry Pi 2 is camera-shy. As it turns out, flashes of high-intensity, long-wave light – like those emitted from a laser pointer or a xenon flash from a camera – cause the chip that’s responsible for regulating the processor core power to momentarily get confused and thus, lose power. As for what’s actually happening, the foundation says it’s something known as the photoelectric effect in which metals emit electrons when hit by light. The chip in question is marked “U16” on the Pi 2 and is located between the USB power supply and the HDMI port. Future Wi-Fi routers will 'steer' signals to penetrate the furthest reaches of your home. Once you have a good idea of where Wi-Fi signals begin to fall off in your home, the next logical task is dealing with it. 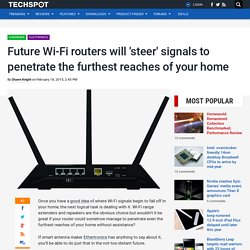 Wi-Fi range extenders and repeaters are the obvious choice but wouldn’t it be great if your router could somehow manage to penetrate even the furthest reaches of your home without assistance? If smart antenna maker Ethertronics has anything to say about it, you’ll be able to do just that in the not-too-distant future. The company recently unveiled a new chip that’ll bring its active antenna technology to routers. Specifically, it uses a new steering algorithm that creates multiple radiation patterns around router antennas to determine which is ideal for a given situation. How (and Why) to Change Your MAC Address on Windows, Linux, and Mac. Each network interface on your computer or any other networked device has a unique MAC address. 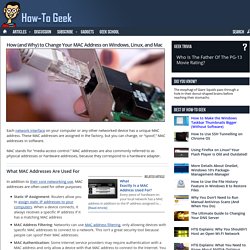 These MAC addresses are assigned in the factory, but you can change, or “spoof,” MAC addresses in software. MAC stands for “media access control.” How to Access Your Router If You Forget the Password. Routers protect their web interfaces, where you can configure their networking, parental control, and port forwarding settings, with a username and password. These default passwords can be changed to protect the router’s settings. If you’ve forgotten a router’s password – or if you acquired a used router and don’t know its password – there’s a way to reset the password. You may also be able to forward ports without knowing the password. Find the Default Username and Password. Not All Ethernet Cables Are Equal: You Can Get Faster LAN Speeds By Upgrading.

Wired connections, which use Ethernet cables, are generally faster and have lower latency than Wi-Fi connections. But, just as modern Wi-Fi hardware has advanced, modern Ethernet cables are capable of communicating at faster speeds. HTG Explains: What’s the Difference Between Ad-Hoc and Infrastructure Mode? How to Ensure Your Home Router Has the Latest Security Updates. Keeping your home router updated is a crucial part of staying secure. Shellshock affected a number of routers, and we’ve also seen routers hacked and turned into botnets.

Home router security is notoriously poor. Geek School: Learning Windows 7 – Networking. Last time we looked at the theory behind IP addresses, subnet masks and name resolution, and we ended the installment with a practical guide on how to change your network settings. This time we take that knowledge and extend it by introducing things like DHCP, Network Locations, Ping and much more. Be sure to check out the previous articles in this Geek School series on Windows 7: And stay tuned for the rest of the series all week long. The Dynamic Host Configuration Protocol is used to assign IP addresses to devices on the fly, as opposed to setting the IP address of the device manually like we did in the last article.

HTG Explains: Why You Shouldn’t Host an Open Wi-Fi Network. Open home Wi-Fi networks are still too common. The situation has improved as wireless router manufacturers began shipping with wireless passwords enabled by default, but there are still too many unsecured Wi-Fi networks out there. Hosting an open Wi-Fi network can cause a number of problems for you, whether you’re trying to do a good deed by sharing your connection or just haven’t set up a password yet. Image Credit: Matt J Newman on Flickr Legal Problems Legal problems are probably the scariest possible consequence of hosting an open wireless network.

Arrests: In 2011, a man was arrested for downloading child pornography. Neither of these is likely to happen, but they can happen. Image Credit: Michael Whitney on Flickr Internet Connection Consequences Internet service providers in the USA have announced plans to participate in a “copyright alert system.” 5 Things You Need to Do Immediately After Plugging In Your New Router. Routers are such an infrequently replaced component of your home network that it’s easy to forget how you had things previously configured and what settings are too important to not overlook. Read on as we highlight the first five things you need to do right after powering up your new router.