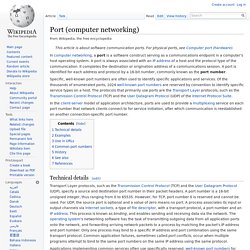 A port is always associated with an IP address of a host and the protocol type of the communication. It completes the destination or origination address of a communications session. A port is identified for each address and protocol by a 16-bit number, commonly known as the port number. Specific, well-known port numbers are often used to identify specific applications and services.

Of the thousands of enumerated ports, 1024 well-known port numbers are reserved by convention to identify specific service types on a host. In the client-server model of application architecture, ports are used to provide a multiplexing service on each port number that network clients connect to for service initiation, after which communication is reestablished on another connection-specific port number. Port connection attempts are frequently monitored and logged by computers. Network socket. A network socket is an endpoint of an inter-process communication across a computer network. 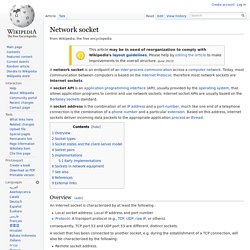 Overview[edit] An Internet socket is characterized by at least the following : consequently, TCP port 53 and UDP port 53 are different, distinct sockets. A socket that has been connected to another socket, e.g. during the establishment of a TCP connection, will also be characterized by the following: Remote socket address. As discussed in the client-server section below, a TCP server may serve several clients concurrently. Socket types[edit] Several Internet socket types are available: Socket states and the client-server model[edit] Network interface device. Two simple NIDs, carrying six lines each, on the outside of a building In telecommunications, a Network Interface Device (NID) is a device that serves as the demarcation point between the carrier's local loop and the customer's premises wiring. 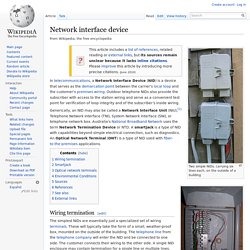 Outdoor telephone NIDs also provide the subscriber with access to the station wiring and serve as a convenient test point for verification of loop integrity and of the subscriber’s inside wiring. Network interface controller. "Network card" redirects here. 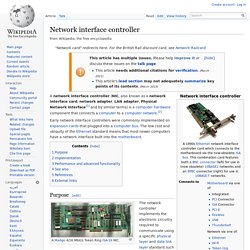 Purpose[edit] The network controller implements the electronic circuitry required to communicate using a specific physical layer and data link layer standard such as Ethernet, Fibre Channel, Wi-Fi or Token Ring. Although other network technologies exist, IEEE 802 networks including the Ethernet variants have achieved near-ubiquity since the mid-1990s. Implementation[edit] Computer port (hardware) Examples of computer connector sockets on various laptops In computer hardware, a port serves as an interface between the computer and other computers or peripheral devices. 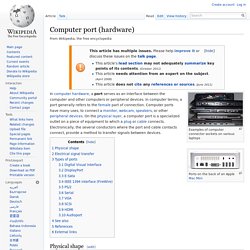 In computer terms, a port generally refers to the female part of connection. Computer ports have many uses, to connect a monitor, webcam, speakers, or other peripheral devices. On the physical layer, a computer port is a specialized outlet on a piece of equipment to which a plug or cable connects. Electronically, the several conductors where the port and cable contacts connect, provide a method to transfer signals between devices. Port connectors may be male or female, but female connectors are much more common. Physically identical connectors may be used for widely different standards, especially on older personal computer systems, or systems not generally designed according to the current Microsoft Windows compatibility guides. Hot-swappable ports can be connected while equipment is running. Multiple Interface Connections (Networking Pupppylinux)