20 Tools to Find Local Networking Events Quickly. Where to schmooze your next boss or someone who can lead you to them. 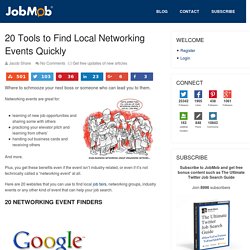 Networking events are great for: learning of new job opportunities and sharing some with otherspracticing your elevator pitch and learning from others’handing out business cards and receiving others And more. Plus, you get these benefits even if the event isn’t industry-related, or even if it’s not technically called a “networking event” at all. To Take The Work Out Of Networking, Reframe Your End Goal. Traditionally, we have seen the entrepreneur as a lone wolf who creates a big, powerful enterprise on his own. 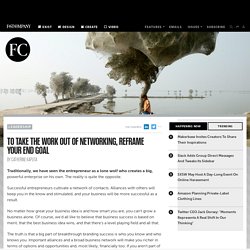 The reality is quite the opposite. Successful entrepreneurs cultivate a network of contacts. Alliances with others will keep you in the know and stimulated, and your business will be more successful as a result. No matter how great your business idea is and how smart you are, you can't grow a business alone. Of course, we'd all like to believe that business success is based on merit, that the best business idea wins, and that there's a level playing field and all that. Glogin?URI=

13 Meetup Groups to Join if You’re New to Tech. If you’re learning to code, then you’re already part of a special, motivated community that recognizes how important digital skills are to a successful career. 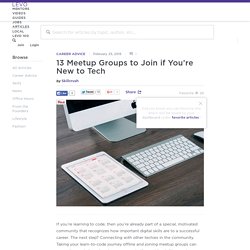 The next step? Connecting with other techies in the community. 5 “Thank You” Letters You Should Be Sending to Your Network. Whether you’re job searching, working on your professional development, or building your career, you’ve probably been in a situation that warranted showing appreciation and gratitude. 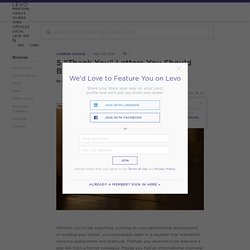 Perhaps you received a job lead and a pep talk from a former colleague. Maybe you had an informational interview with someone who has now taken you under their wing and is serving as a mentor. It might even be a family member who’s your greatest fan. Whatever the situation, one way to show gratitude is to write a thank-you note that expresses your appreciation. Why Gratitude Matters Before getting into writing the content for your thank you letters, let’s ask the question, “why gratitude?” How to Master the Art of Networking. 21 Ways to Start a “Networking” Conversation with Anyone. 13 #NetworkingFails We’re All Guilty Of (and How to Fix Them!) When it comes to networking, “Collecting as many business cards as you can, and trolling LinkedIn are not enough.” 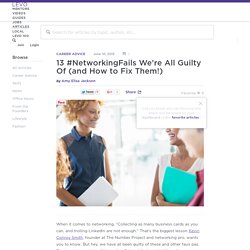 That’s the biggest lesson Kevin Conroy Smith, founder at The Number Project and networking pro, wants you to know. But hey, we have all been guilty of these and other faux pas. The key is to spot the #NetworkingFail and fix it quick! After all, summertime is the perfect opportunity to flaunt your tan and your talents while schmoozing. Networking Fail #1: Overselling your skills and talents. 4 Ways to Network When You’re Self-Employed. When you work in an office, you have a built-in network. 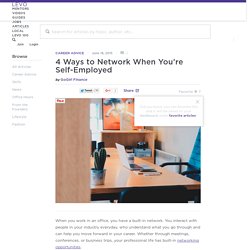 You interact with people in your industry everyday, who understand what you go through and can help you move forward in your career. Whether through meetings, conferences, or business trips, your professional life has built-in networking opportunities. But if you’re one of the millions of self-employed workers, networking can be a little trickier. Your Ultimate Guide to Networking in Grad School. Most of us are familiar with the major benefits of going to graduate school. 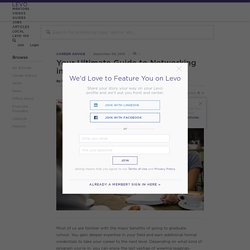 You gain deeper expertise in your field and earn additional formal credentials to take your career to the next level. Depending on what kind of program you’re in, you can enjoy the last vestige of wearing leggings-as-pants on a non-holiday weekday. No matter what kind of program you’re in, many people say that the most valuable aspect of graduate school is the professional network you build. Whether you are working on applications for next fall or you have just started the new semester, it’s always time to think about networking. Here is a calendar of what to do, when, to maximize the number of people you meet, to create meaningful relationships, and to build a bustling network where you and your peers leverage one another’s talents and connections.

[Related: 5 Reasons Why Grad School May Not Be Such a Bad Idea] 1. Recruiters’ Best Networking Tips. By Lee E. 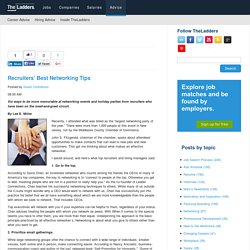 Miller Recently, I attended what was billed as the “largest networking party of the year.” There were more than 1,600 people at this event in New Jersey, run by the Middlesex County Chamber of Commerce. John S. 9 networking tips for introverts. Networking, whether during a job search or simply to maintain professional connections and grow your network, can be stressful, even for the most outgoing, extroverted job-hunter. 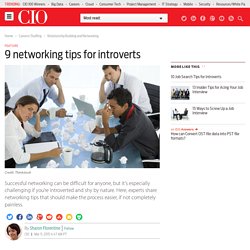 For an introvert, however, the process can be downright paralyzing. Even though introverts are often creative, thoughtful and work well with others, it often seems that extroverts have the edge when it comes to networking and making beneficial professional connections. But if you're an introvert, you can make networking more enjoyable and more successful by translating it into an approach that works with and not against their personality. 1.

The 10 best networking tips for people who hate networking. Everyone needs to network. 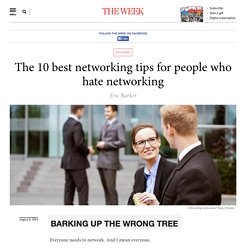 And I mean everyone. What determines whether a drug dealer dies or becomes a kingpin? Yup — the size of his network. Networking is one of the 10 things I recommend people do every week. Research shows networking is vital to staying employed, salary growth, and job satisfaction. In his classic 1974 study Getting a Job, Granovetter…found that 56 percent of those he talked to found their job through a personal connection. How to Talk About Your Career Change.

Your 6-Step Plan for a Perfect Networking Call. Whether you’re still trying to figure out what you want to with your life, actively applying to jobs, or just trying to be ready for the next stage of your career, you’ve probably heard this advice before: “Go talk to as many people as you can.” In fact, I give the advice to reach out to people for a quick informational interview almost on a daily basis. How to Network When Changing Careers. Career changes can feel incredibly daunting. And networking for that change? Even more so. All your contacts know you for your current role and responsibilities, so how do you even begin networking effectively for your new desired role? 1. Let People Know Even though many of the people in your immediate network won’t be in your target industry, you never know who might be in their networks. 5 New Ways to Network That You Won't Dread. If you want to groan every time you hear the word “networking,” well, I don’t exactly blame you.

The word conjures images of uncomfortable schmooze-fests, where suit-clad business executives work the room, wine glass in hand, feigned interest at the ready. Who would enjoy that? But guess what? An Introvert's Guide to Networking. Throughout college, I was the “shy girl.” I often wondered why it was hard for me to open up to strangers and attend social events after a long day at school. But I was so used to being labeled as “shy” that I never thought of changing it—it was just my identity. Finally, at my first job, I took the Myers-Briggs personality test and a light bulb went off: I’m an introvert. I realized that there are many benefits of having my personality type—we introverts tend to be reflective and have close relationships, to name a couple—and I became proud of who I was. But being an introvert makes some things difficult. I’ve picked up a few tips and habits over the years that have helped me navigate the social side of my career. 1.

10 Networking Conversation Starters You'll Actually Use. The last designated “networking” event I attended happened to be The Daily Muse’s one-year anniversary party, and as I stood there with a friend in a crowded room of strangers, I realized I know almost nothing about what it takes to actually network. As a writer, I'm not wired to be a salesperson of myself, and I often find myself standing around awkwardly, trying to start a conversation with someone (anyone) who’s standing there, probably (maybe) thinking the same thing. But the great thing about going to functions like this is that you can learn pointers from other people—a lot of party people, more skilled than myself, introduced themselves to me with natural icebreakers that weren’t weird or disingenuous.

Here are some the best conversation starters I’ve picked up from that event and others, plus a few I’ve come up with on my own: The Smartest Ways to Network at a Party. Some people enter a room of strangers and glide along from one lively conversation to another, uncovering golden new business contacts. How do they do it?