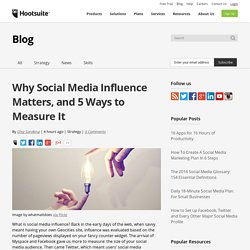 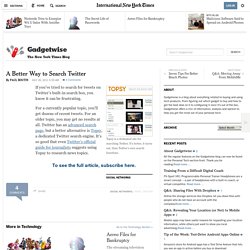 It’s better, it turns out, than Twitter’s own search functions. If you’ve tried to search for tweets on Twitter’s built-in search box, you know it can be frustrating. For a currently popular topic, you’ll get dozens of recent tweets. For an older topic, you may get no results at all. Twitter has an advanced search page, but a better alternative is Topsy, a dedicated Twitter search engine. Topsy’s advanced search, linked from its home page, lets you search for specific Web domains or Twitter users, tweets posted during a specific period of time in the past, and for all tweets with the word “lady” but not “gaga.” Topsy has indexed tweets back to mid-2008. Sonar Solo. Tweriod - Get to know when your Twitter followers are online the most.

Rapportive. The Complete Guide to the Brand New Buffer Web App. 220 Flares Filament.io 220 Flares × What a crazy few weeks here at Buffer HQ in San Francisco to make everything work out in time for Christmas. 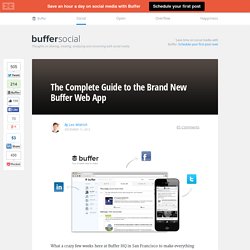 The last thing we wanted to happen was for you to not get your shiny new presents. And fortunately, it all worked out. The brand new Buffer is ready today. We’re launching both a brand new web app and iPhone app today. So without, further ado, let’s dig in and have a look around about what’s new: Easily manage all your social accounts With the new Buffer web app, we wanted to give you a much clearer overview of all the social accounts you want to post to: From the new compose menu in the top left you can easily start sharing to all your social accounts.

With the click of a button you can add multiple accounts to your Buffer stream, including Twitter, Facebook, Facebook pages, LinkedIn, LinkedIn groups and App.net: A better stream of all updates in your Buffer Better analytics, including “Top posts” from you 1. 2. 3. 4. The Top 10 Secret Buffer Features: Supercharge your Social Sharing. 1K Flares Filament.io 1K Flares × 2012 is almost over and it’s been an absolutely crazy year here at Buffer. 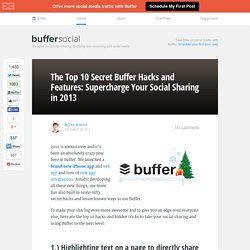 We launched a brand new iPhone app and web app and tons of new app integrations. Amidst developing all these new things, our team has also built in some nifty secret hacks and lesser known ways to use Buffer. To make your sharing even more awesome and to give you an edge over everyone else, here are the top 10 hacks and hidden tricks to take your social sharing and using Buffer to the next level: 1.)

Has it ever happened to you that you are reading a great quote on the web, that your friends and followers should read too? Highlight any quote on a website: Hit the Buffer button from your browser extension and share the quote together with the link: 2.) With Pinterest, Instagram and also Facebook exploding with more visual postings, adding your own great pics to the newsstream is becoming a lot more powerful. It will go into your Buffer as the full size image: 3.) 4.) 5.)

How To Tweet At The Best Times For Your Followers - Tweriod & Buffer team up. 119 Flares Filament.io 119 Flares × It’s one of those big mysteries that a lot of people on Twitter (myself included) desperately want to know: “When is the best time for me to Tweet?” 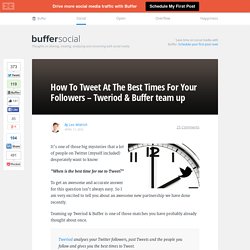 To get an awesome and accurate answer for this question isn’t always easy. So I am very excited to tell you about an awesome new partnership we have done recently. Teaming up Tweriod & Buffer is one of those matches you have probably already thought about once. Tweriod analyses your Twitter followers, past Tweets and the people you follow and gives you the best times to Tweet.Buffer lets you easily share Tweets, Facebook posts and LinkedIn updates at set times. A lot of people have already told us this: “You know, I first go and get my Tweriod report, then I take those times and set them up inside Buffer.”