(57) Whose Futures Matter? Billionaire capitalists are designing humanity's future. Don't let them. Last year a group of cryptocurrency investors purchased a decommissioned cruise liner, the Pacific Dawn, and renamed it the MS Satoshi, after the alleged creator of Bitcoin. 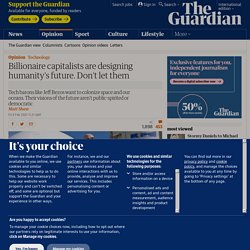 The investors were members of the “seasteading” community, an experimental movement that wants to create autonomous, floating city-states in international waters. The Silicon Valley billionaire Peter Thiel, a self-described anarcho-capitalist, is a major supporter of the movement – which, like space colonization, seems to attract the enthusiasm of a certain kind of fantastically rich and rightwing tech baron. The MS Satoshi project was a failure. In a major blow to the seasteading movement, the ship was sold for parts in December, after the ship’s owners were unable to get insurance for their voyage into international waters. 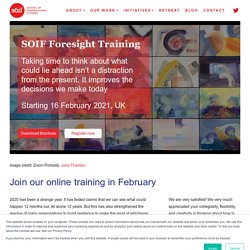 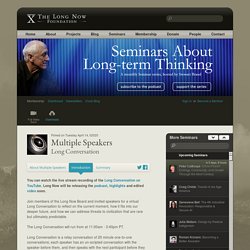 Would you like to be a featured Sponsor? Seminars About Long-term Thinking is made possible through the generous support of The Long Now Membership and our Seminar Sponsors. Futurist Careers. It’s impossible to see into the future, but it’s not impossible to forecast what will happen. 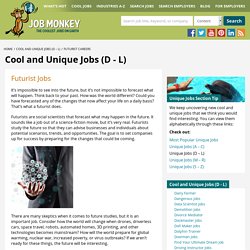 Think back to your past. How was the world different? Could you have forecasted any of the changes that now affect your life on a daily basis? That’s what a futurist does. Futurists are social scientists that forecast what may happen in the future. Why the pandemic reminds us we need corporate foresight, before and during a crisis. By Alex Fergnani SINGAPORE — The COVID-19 pandemic has forced many firms to implement sudden operational changes. 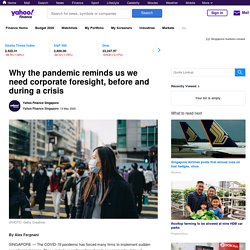 These include reconfiguration of work arrangements, delay of investment plans, and in some cases, letting go of workers. These measures, though necessary, are reactive. As managers were pressed with time for quick decisions amidst rapid changes, some reactions might not have led to the best decisions. The Explore-Exploit Continuum. Senior leaders often want to know how they can build an environment to allow innovation to thrive. 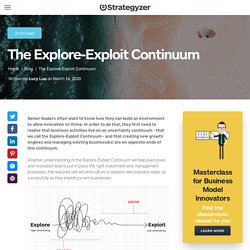 In order to do that, they first need to realise that business activities live on an uncertainty continuum - that we call the Explore-Exploit Continuum - and that creating new growth engines and managing existing business(es) are on opposite ends of this continuum.A better understanding of the Explore-Exploit Continuum will help executives and innovation teams put in place the right investment and management processes, the required skill set and culture to explore new business ideas as successfully as they exploit current businesses. Common Misconception When we think of the best companies in the world we imagine highly efficient execution machines, that are great at exploiting their current success. The Continuum. 50 Leading Female Futurists. Increasingly futurists are being hired by businesses to present visions of what the future could look like. 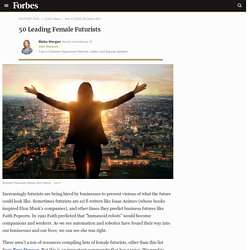 Sometimes futurists are sci fi writers like Isaac Asimov (whose books inspired Elon Musk’s companies), and other times they predict business futures like Faith Popcorn. In 1991 Faith predicted that "humanoid robots" would become companions and workers. As we see automation and robotics have found their way into our businesses and our lives; we can see she was right. There aren’t a ton of resources compiling lists of female futurists, other than this list from Ross Dawson. Bill Gates predicts the next 10 world-changing breakthroughs. How to Practice Long-Term Thinking in a Distracted World. France seeks science-fiction writers to help futureproof its military against science-fact. The French army has said it is looking to recruit four or five sci-fi writers and futurologists to staff a "Red Team" that predicts future threats and how to disrupt or defend against them. 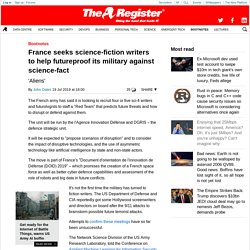 The unit will be run by the l'Agence Innovation Défense and DGRIS – the defence strategic unit. The Foresight Guide – A Big Picture Guide to the 21st Century. SSHRC. How to spot good “futurism” – Jorge Camacho. Stakeholders in Thinking about the Future - Google Sheets. Candy Made Up Dreaming Together. FutureMotions introductiondoc January2018. Year in Review: 2017 in 12 Charts. Zonination/perceptions: Perceptions of Probability and Numbers. From control &prediction to conscious participation, foresight & anticipation. Foresight is different from prediction! 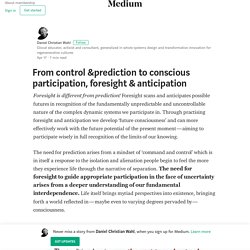 Video images of the future 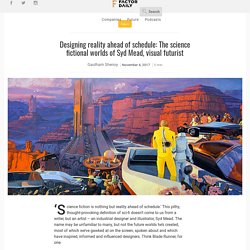 This pithy, thought-provoking definition of sci-fi doesn’t come to us from a writer, but an artist – an industrial designer and illustrator, Syd Mead. The name may be unfamiliar to many, but not the future worlds he’s created, most of which we’ve gawked at on the screen, spoken about and which have inspired, informed and influenced designers. Think Blade Runner, for one. Looking to the Future Podcast – Just another WordPress site.

More science fiction can help us create a better tomorrow. Photo illustration by Slate. Stills from Hulu and Twentieth Century Fox Film Corporation. Consuming dystopian science fiction has quickly become a popular coping mechanism for Americans trying to adapt to (or resist) the sometimes-dark reality of 2017. Know Thy Futurist. Image: Maurizio Pesce Many visions of the future proliferate in Silicon Valley. Which one is worth fighting for? Have you heard? Someday we will live in a perfect society ruled by an omnipotent artificial intelligence, provably and utterly beneficial to mankind. That is, if we don’t all die once the machines gain consciousness, take over, and kill us.

Watershed moments. Why Foresight is important. The Flare and Focus of Successful Futurists. The ability to plausibly forecast the future requires alternating between broad and narrow ways of thinking. Futurists are skilled at listening to and interpreting signals, which are harbingers of what’s to come. They look for early patterns — pretrends, if you will — as the scattered points on the fringe converge and begin moving toward the mainstream. The fringe is that place where hackers are experimenting, academics are testing their ideas, technologists are building new prototypes, and so on.

Futurists know most patterns will come to nothing, so they watch and wait and test the patterns to find those few that will evolve into genuine trends. Each trend is a looking glass into the future, a way to see over time’s horizon. Although futures studies is an established academic discipline, few companies employ futurists. Wired. Our Robots Are Powered by Poets and Musicians Beth Holmes, Farah Houston, Michelle Riggen-­Ransom Knowledge Manager | Alexa Information team Senior Manager | Alexa Personality team Managing Editor | Alexa Personality team Behind your high tech digital assistant is a band of liberal arts majors. Know your foresight audience. During class last night on visualization techniques, a discussion emerged around when to try these techniques and with whom. I gave a quirk-and-dirty on “Know Your Audience” from the Organizational Futurist Audit. I wished I had a simple graphic handy to aid the explanation and thus figured it was to put one together. Figured I’d share it with y’all.

It’s over a decade old but still robust and seemingly one of the few things people seems to remember The basic idea is that there are “typical” responses to the foresight message, mapped along two dimensions. Free ebook: 40 Futurists on advice for young people on the future of work : Leading Thought. We're moving fast. But nobody knows where we're going. Visit to the World's Fair of 2014. Quora. Think Like a Futurist to Be Prepared for the Totally Unexpected - WSJ.

Drivers of change. How to Invent the Future in 6 Easy Steps – TED Fellows. A risky presidential candidate. New legislation for labeling GMO foods. Speculating Futures. These 6 new technology rules will govern our future. A robotic waiter carries food in a restaurant in Kunshan, China. (2014 photo by Johannes Eisele/Agence France-Presse via Getty Images) What Can Futurists Teach Us about Imagination? - Scientific American Blog Network.

"Thinking about the future isn’t a special skill; virtually everyone does it all the time. The Board's Duty of Foresight: Associations Now. The Godfather of Good. In 1966, Stewart Brand started selling pin-back buttons featuring a simple question: “Why haven’t we seen a photograph of the whole Earth yet?” Sweden's Minister of the Future Explains How to Make Politicians Think Long-Term. Kristina Persson’s job is rather unique.

Futures Ready Strategy Development – Thinking Futures. For some time now I’ve been using this graphic to talk about the steps involved in futures ready strategy development. A New Board Game For Public Servants  One Earth, Two Social Fields. Why We Need to Pick Up Alvin Toffler’s Torch. In many large ways, it’s almost as if we have collectively stopped planning for the future. Logicalis predicts the digital future with UFKH membership. Predicting the Future: How to Engage in Really Long-Term Strategic Digital Planning. You're More Likely to Die in a Human Extinction Event Than a Car Crash.

What Ancient History Has To Say About Near-Future Doom. The Curse of the Futurist (or, How You Can’t Escape the S-Curve) Healthcare of the future. Scenarios and the Military. The Museum of Science Fiction Debuts Their Scholarly Journal's First Issue. The path to enlightenment and profit starts inside the office. A strategic foresight and innovation consultancy with a global network of engineers, consultants and designers. Capitalism under the spotlight: six must-read books.

Strategic Foresight speaking. Cognitive bias and future thinking. Future of Toilets. Methods + SW. WWW. 2020 and other futures. How to Seize the Opportunities When Megatrends Collide. Why Your Company Needs a Resident Futurist. 2015-SOF-ExecutiveSummary-English.pdf. 125 Top Women Futurists & the End of Business as Usual. The 10 Best Sci-Fi Fantasy Novels of 2015 So Far. William Gibson on finding the future in the strangeness of now - Home. Futurism Needs More Women.

Sleeping Through a Revolution — Aspen Ideas. Andrew Curry on Futures. Forecasting principles. No one cares about your jetpack: on optimism in futurism - Dangerous to those who profit from the way things areDangerous to those who profit from the way things are. Game of Thrones: why hasn't Westeros had an industrial revolution? 11 Ways The Future Could Turn Out Differently Than You Expect. Home - Welcome to Foresight For Development. To Replace or Respect: Futurology as if People Mattered. Are We Passing Through a Bottleneck, or Will the Explosion of Existential Risks Continue? Review of Michio Kaku’s, Visions: How Science Will Revolutionize the 21st Century. The past and future of global organizations. Synthesis, capabilities, and overlooked insights: Next frontiers for strategists. Beyond Forecasting: Creating New Strategic Narratives. Foresight and Surprise.

14-814-future-cities-visual-history.pdf. 10 Horrifying Technologies That Should Never Be Allowed To Exist. Inside The World's Most Intriguing (And Probably Only) Futurist Bar. Futurists' Blogs. _SR-1675C_SystemsMythologyToolkit_web.pdf. Building a forward-looking board. All The Times Science Fiction Became Science Fact In One Chart. So You Think You're Smarter Than A CIA Agent : Parallels. IRI2038 February News. The Importance of Resilience and How to Cultivate It – 10 Principles Overview.