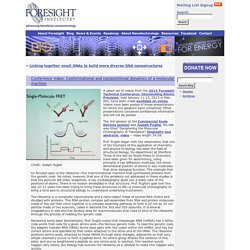 Videos have been posted of those presentations for which the speakers have consented. Other presentations contained confidential information and will not be posted. The 3rd speaker at the Commercial Scale Devices session was Joseph Puglisi. His talk was titled “Deciphering the Molecular Choreography of Translation” biography and abstracts, video – video length 34:08. Prof. The ribosome is a composite nanomaterial and a nano-object made of several RNA chains and studded with proteins. Reviewing some basic biochemistry, Prof. To achieve fidelity, the ribosome has to select the right tRNA that corresponds to the given codon and ignore the other tRNAs. Prof. Looking for a method to track conformation as a function of time in real time, Prof. Prof. Conference video: Regenesis: Bionano. Credit: George Church A select set of videos from the 2013 Foresight Technical Conference: Illuminating Atomic Precision, held January 11-13, 2013 in Palo Alto, have been made available on vimeo. 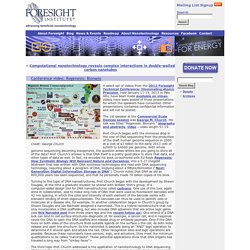 Videos have been posted of those presentations for which the speakers have consented. Other presentations contained confidential information and will not be posted. The 1st speaker at the Commercial Scale Devices session was George M. Church. Prof. Turning to the topic of DNA nanostructures, Prof. The third topic Prof. Another application of single molecule DNA sequencing is nanopores, of which there are several approaches. These advances in genome sequencing are opening the door to soon getting everyone’s genome sequenced, leading Prof. 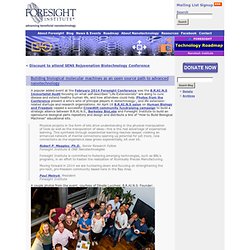 Photos from the Conference present a who’s who of principal players in biotechnology-, and life extension-related startups and research organizations. An April 16 B.R.AI.N.S salon on Human Biology and Freedom capped a successful Crowdtilt community fundraising campaign to build a strategic alliance between B.R.AI.N.S., Berkeley BioLabs and Foresight Institute to build an opensource biological parts repository and design and distribute a line of “How-to Build Biological Machines” educational kits.

Molecular Folding Science: the Future of Architectural Biomimicry at the Atomic Scale by Ronald Zuckermann at the 2014 Technical Conference: Integration. Early registration rates and reduced hotel rates are available for a limited time. 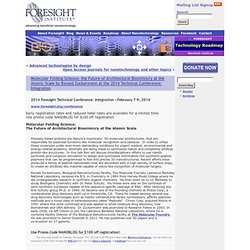 Use promo code NANOBLOG for $100 off registration Molecular Folding Science: The Future of Architectural Biomimicry at the Atomic Scale Precisely folded proteins are Nature’s machinery: 3D molecular architectures, that are responsible for essential functions like molecular recognition and catalysis. In order to utilize these molecules under ever-more demanding conditions for urgent medical, environmental and energy-related problems, attempts are being made to synthesize robust and completely artificial protein-like structures. In this talk Ron will discuss interdisciplinary efforts to use robotic synthesis and computer simulation to design and synthesize information-rich synthetic peptoid polymers that can be programmed to fold into precise 3D nanostructures. 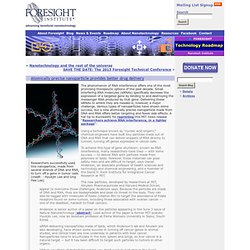 (credit: : Hyukjin Lee and Ung Hee Lee) The phenomenon of RNA interference offers one of the most promising therapeutic options of the past decade. Small interfering RNA molecules (siRNAs) specifically decrease the expression of a targeted gene by binding to and destroying the messenger RNA produced by that gene. Delivering these siRNAs to where they are needed is, however, a major challenge. An expanded genetic alphabet could lead to more easily designed proteins. Gold nanostars shuttled to cancer cell nucleus to release drug. Adding to the toolbox for making complex molecular machines. DNA nanotechnology-based nanorobot delivers cell suicide message to cancer cells. Novel RNA structural motifs expand tool kit for RNA nanotechnology. RNA CAD tool for synthetic biology may facilitate RNA nanotechnology. New computer assisted design (CAD) tools for engineering RNA components have been developed for the growing field of synthetic biology. 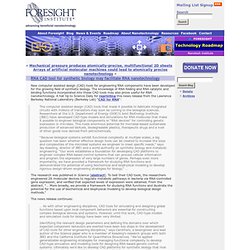 The knowledge of RNA folding and RNA catalytic and binding functions incorporated into these CAD tools may also prove useful for RNA nanotechnology. A hat tip to Science Daily for reprinting this news release from the Lawrence Berkeley National Laboratory (Berkeley Lab) “CAD for RNA“: The computer assisted design (CAD) tools that made it possible to fabricate integrated circuits with millions of transistors may soon be coming to the biological sciences. Researchers at the U.S. Darpa seeks nanotechnology defense against novel pathogens. An artificial molecular clock to control artificial molecular machines. One of the challenges in developing advanced nanotechnology, sometimes called molecular manufacturing or productive nanosystems, is learning to control systems of molecular machines by using other molecular systems for timing and turning machines on and off. 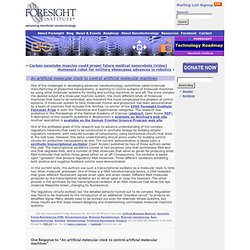 The more complex the desired output of a molecular machine system, the more different kinds of molecular machines that need to be controlled, and therefore the more complicated the problem of control systems. A molecular system to time molecular motion and production has been demonstrated by a team of scientists that includes Erik Winfree, co-winner of the 2006 Foresight Institute Feynman Prize in both the Theoretical and Experimental categories. The research was published in the Proceedings of the National Academy of Sciences [abstract, Open Access PDF]. A description of the research published in Biopolymers is available on Winfree’s web site. 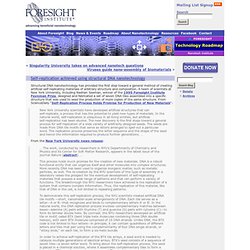 A team of scientists at New York University, including Nadrian Seeman, winner of the 1995 Foresight Institute Feynman Prize, designed and fabricated a set of seven DNA tiles assembled into a specific structure that was used to seed the production of more copies of the same structure. From ScienceDaily “Self-Replication Process Holds Promise for Production of New Materials“: New York University scientists have developed artificial structures that can self-replicate, a process that has the potential to yield new types of materials. In the natural world, self-replication is ubiquitous in all living entities, but artificial self-replication has been elusive. Destroying cancer cells by incorporating an artificial biological computer. Several decades from now we hope to have sophisticated medical nanorobots, produced by molecular manufacturing, that can enter cells, analyze the state of the cell, and initiate appropriate therapy, such as killing cancer cells.

A team of scientists from Harvard University, MIT, and the ETH in Zurich, Switzerland has taken an important step in that direction by demonstrating a synthetic circuit that, when incorporated into a cell, detects the presence or absence of five specific small RNA molecules,processes that information, and then, based upon that result, either kills or does not kill the cell. ScienceDaily reprints an ETH news story written by Peter Rüegg “Profiler at the cellular level“ New electron diffraction method for nanotechnology determines nanostrucutres in days instead of years. An important component of progress in designing and making molecular machines and other nanostructures is a quick way to see the structures that have been produced. 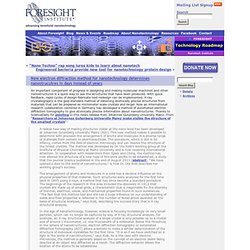 With quick feedback, rapid cycles of design-fabricate-test-redesign can be implemented. First direct measurement of force generated by an individual synthetic molecular machine. News articles by Jon Cartwright on the Chemistry World news site and by Michael Berger at Nanowerk describe a significant molecular machine milestone achieved by the research groups of David A. 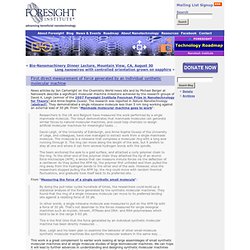 Leigh (winner of the 2007 Foresight Institute Feynman Prize in Nanotechnology for Theory) and Anne-Sophie Duwez. The research was reported in Nature Nanotechnology [abstract]. They demonstrated a single rotaxane molecule less than 5 nm long working against an external load of 30 pN. From “Manmade molecular machine goes to work“: Researchers in the UK and Belgium have measured the work performed by a single manmade molecule. An evolution machine to accelerate nanotechnology development? Proposals for assembling molecular machine systems from parts based on biopolymers usually take the approach of computationally designing proteins, RNA, or DNA molecules to serve as devices or as components of supramolecular systems.

An alternative approach that has also been pursued is directed evolution in the laboratory (for example, this post from April, 2011 “Much faster directed evolution of proteins could speed development of molecular machine systems“). Two years ago Harvard Medical School geneticist George Church and his colleagues introduced a multiplex automated genome engineering (MAGE) system for the large-scale evolution of not just one or a few genes, but of whole genomes via the simultaneous modification of many genes (“Programming cells by multiplex genome engineering and accelerated evolution” abstract, PDF). …Say hello to the evolution machine. It can achieve in days what takes genetic engineers years. Handling flexible parts in RNA nanotechnology. As a road to advanced nanotechnology, RNA nanotechnology offers greater structural and functional versatility than does DNA nanotechnology. A disadvantage of multiple structural motifs, however, is that finding small molecules that bind specifically to an RNA molecule is more difficult than, for example, finding small molecules that bind specifically to protein molecules, which exhibit single defined structures.

Because the last decade has also shown RNA to play a much broader role in cellular function in higher (meaning eukaryotic) organisms than was previously appreciated, this issue is receiving greater attention as researchers look for drugs that target specific RNA molecules. Computational circuit built from 74 small DNA molecules (with video) Caltech professor Erik Winfree, who with colleague Paul W.K. Rothemund won the 2006 Feynman Prizes in Nanotechnology for both the experimental work and theory categories, and postdoctoral researcher Lulu Qian have designed a simple DNA gate architecture practical for the construction of large-scale circuits that could eventually involve thousands of gates. Such complex biochemical circuits, although very slow compared to current electronic computers, could be appropriate for the embedded control of molecular devices.

“A simple DNA gate motif for synthesizing large-scale circuits” was published in the Journal of the Royal Society Interface and is available free. As described on their web site, the authors call these DNA nanotechnology devices “seesaw gates”.