Making Change: How to Build Adaptive Capacity. Editors’ Note: This article is excerpted from a paper produced for Management Consulting Services (MCS) in Boston. 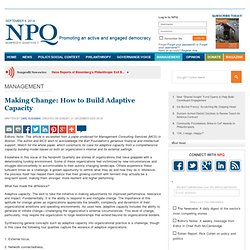 The author and MCS wish to acknowledge the Barr Foundation’s generous financial and intellectual support. Watch for the whole paper, which constructs its case for adaptive capacity from a comprehensive capacity building model based on both an organization’s internal and its external settings. Elsewhere in this issue of the Nonprofit Quarterly are stories of organizations that have grappled with a deteriorating funding environment. Some of these organizations feel victimized by new circumstances and struggle disconcertedly to accommodate to their quickly changing landscape. 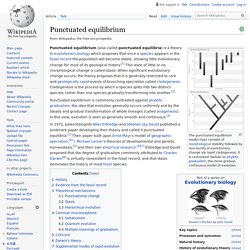 When significant evolutionary change occurs, the theory proposes that it is generally restricted to rare and geologically rapid events of branching speciation called cladogenesis. Cladogenesis is the process by which a species splits into two distinct species, rather than one species gradually transforming into another.[2] Punctuated equilibrium is commonly contrasted against phyletic gradualism, the idea that evolution generally occurs uniformly and by the steady and gradual transformation of whole lineages (called anagenesis). In this view, evolution is seen as generally smooth and continuous.[3] History[edit] Evidence from the fossil record[edit] Stasis[edit] Correlation Vs.Causality: DVD Bonus. The complexity of causality…….. Since my under-graduate I have always been fascinated by the concept of causality. 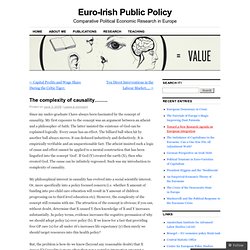 My first exposure to the concept was an argument between an atheist and a philosopher of faith. The latter insisted the existence of God can be explained logically. Every cause has an effect. Complexity, causality, sense making and strategy. How does our conception of the complexity of the world influence how we should approach it? 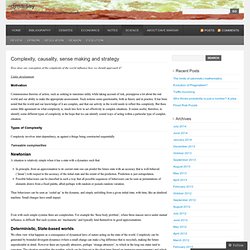 Under development. Commonsense theories of action, such as seeking to maximise utility while taking account of risk, presuppose a lot about the real world and our ability to make the appropriate assessments. Such notions seem questionable, both in theory and in practice. Causality and Complexity. Complexity.

The way we want to make sense of the world around us has often to do with causality. 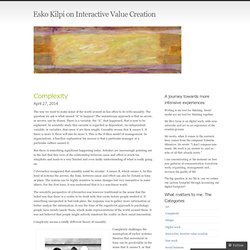 The question we ask is what caused “it” to happen? The mainstream approach is that an arrow, or arrows, can be drawn. There is a variable, the “it”, that happened, that is now to be explained. In scientific study this variable is regarded as dependent. An independent variable, or variables, that cause it are then sought. BvpFslsIgAAyDqq png large. Emergent Futures Mapping with Futurescaper.

Futurescaper is an online tool for making sense of the drivers, trends and forces that will shape the future. 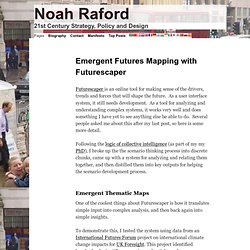 As a user interface system, it still needs development. As a tool for analyzing and understanding complex systems, it works very well and does something I have yet to see anything else be able to do. Three Innovations in Crowd Sourced Scenario Planning, Part 1. Part 1, An Introduction I’ve spent the better part of the last four years working on approaches to online scenario planning as part of my PhD. 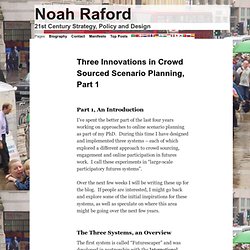 During this time I have designed and implemented three systems – each of which explored a different approach to crowd sourcing, engagement and online participation in futures work. I call these experiments in “large-scale participatory futures systems”. Participatory (Crowd-Sourced) Futures Planning. Venessa Miemis whether talking about a intelligent knowledge infrastructure, robert’s global brain, or suresh’s project matching for climate change initiatives, this article seemed useful. 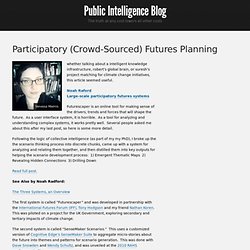 Noah RafordLarge-scale participatory futures systems Futurescaper is an online tool for making sense of the drivers, trends and forces that will shape the future. As a user interface system, it is horrible. As a tool for analyzing and understanding complex systems, it works pretty well. Casting around. Search - foresight from:snowded... Patterns of Agile Adoption. The state of the Future. Of tittering, twittering & twitterpating - Cognitive Edge Network Blog. Complexity, drivers and modulators in life and the law. Working in Complex Spaces from my Favorite Curmudgeon. Jul 26 2013 Add to del.icio.us • Email this • Subscribe to this feed • Save to del.icio.us • Share on Facebook • Digg This! 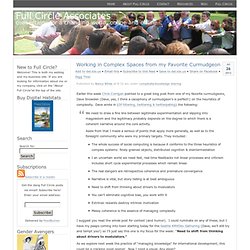 Earlier this week Chris Corrigan pointed to a great blog post from one of my favorite curmudgeons, Dave Snowden (Dave, yes, I think a cacophony of curmudgeon’s is perfect!) Of knowing and the unknown. While yesterday's closing session at IRAHSS13 was creating on the move today's had more preparation. 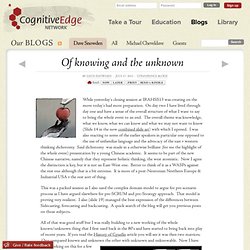 On day two I have lived through day one and have a sense of the overall structure of what I want to say to bring the whole event to an end. The overall theme was knowledge, what we know, what we can know and what we may not want to know (Slide 14 in the now combined slide set) with which I opened. The future State? A typology of Foresight. I enjoy the responsibility of summary type presentations.