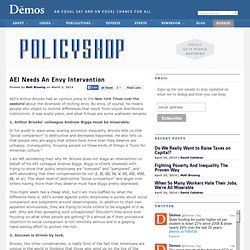 By envy, of course, he means people who object to income differences that result from unjust distributive institutions. It was a silly piece, and what follows are some scattered remarks. Russians Suspected In 'Uroburos' Digital Espionage Attacks. Russian government hackers are suspected of creating a highly-sophisticated piece of malware designed to steal files from nation states’ digital infrastructure. 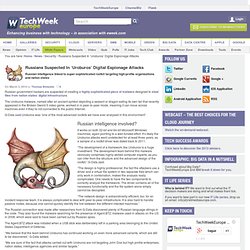 The Uroburos malware, named after an ancient symbol depicting a serpent or dragon eating its own tail that recently appeared in the Broken Sword 5 video game, worked in in peer-to-peer mode, meaning it can move across machines even if they’re not connected to the public Internet. G-Data said Uroburos was “one of the most advanced rootkits we have ever analysed in this environment”. It works on both 32-bit and 64-bit Microsoft Windows machines, again pointing to a well-funded effort. It’s likely the Uroburos attacks went undetected for at least three years, as a sample of a rootkit driver was dated back to 2011. “The development of a framework like Uroburos is a huge investment. “The network design is extraordinarily efficient, too; for an incident response team, it is always complicated to deal with peer-to-peer infrastructure.

The Politics of The Clandestine

Resistence to Spying. Surveillance Programs. Full text of "The Mafia Encyclopedia_" Justice. Survalience & Inequality. Torture. Spy/Big Brother Technology. BIG BROTHER & Co. are WATCHING us.... NSA & Big Brothers, suite. What you need to know: trends and news in surveillance and technology. So You Think You're Smarter Than A CIA Agent : Parallels. A group of 3,000 ordinary citizens, armed with nothing more than an Internet connection, is often making better forecasts of global events than CIA analysts. 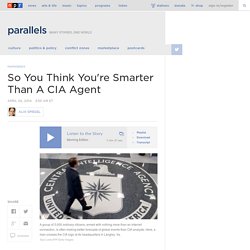 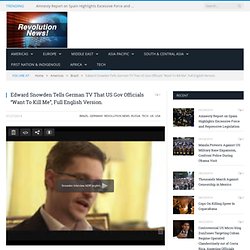 Fugitive former NSA contractor Edward Snowden has claimed that US government officials “want to kill me” in an exclusive interview which German television says it conducted in Moscow. “These people, and they are government officials, have said they would love to put a bullet in my head or poison me when I come out of the supermarket, and then watch as I die in the shower,” he told NDR interviewer Hubert Seipel, who said the interview took place last Thursday.

Snowden, who was granted temporary asylum in Russia in August, referred in the interview to a report by US website BuzzFeed of explicit threats against him from unnamed Pentagon and National Security Agency (NSA) officials. The former NSA contractor is wanted by US authorities on treason charges for disclosing details of a vast intelligence operation that monitored millions of phone calls and emails across the world. Interview removed from youtube, Revolution News - Edward Snowden video. For investigating private intelligence practices, American journalist faces 105 years in prison. Reporters Without Borders is alarmed by the charges currently facing the American investigative journalist, Barrett Brown, who has written for The Guardian and Vanity Fair. 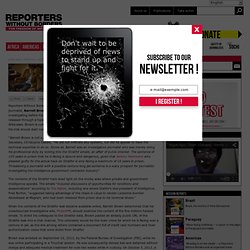 Brown, 31, had been investigating before his arrest, in September 2012, the contents of over five million internal emails released through a hack on the private intelligence company, Stratfor, which were later published by WikiLeaks. Brown is currently in federal custody, facing charges that add up to 105 years in prison. His trial should start next September. “Barrett Brown is not a hacker, he is not a criminal” stated Reporters Without Borders General Secretary, Christophe Deloire, “He did not infiltrate any systems, nor did he appear to have the technical expertise to do so. Wyden Statement at Senate Intelligence Committee’s Open Hearing. 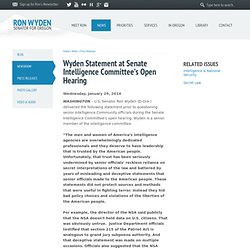 Senator Ron Wyden (D-Ore.) delivered the following statement prior to questioning senior Intelligence Community officials during the Senate Intelligence Committee’s open hearing. Wyden is a senior member of the Intelligence committee. “The men and women of America’s intelligence agencies are overwhelmingly dedicated professionals and they deserve to have leadership that is trusted by the American people. Unfortunately, that trust has been seriously undermined by senior officials’ reckless reliance on secret interpretations of the law and battered by years of misleading and deceptive statements that senior officials made to the American people. 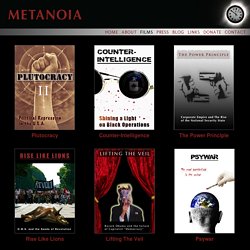