Futures Thinking Now: Facing Uncertainty. From Design Fiction to Experiential Futures. This is the second chapter I wrote for the book, “The Future of Futures“. 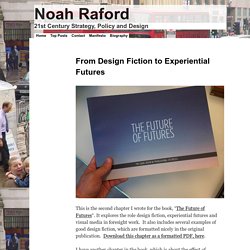 It explores the role design fiction, experiential futures and visual media in foresight work. It also includes several examples of good design fiction, which are formatted nicely in the original publication. Six artifacts from the future – Brookfield Institute for Innovation + Entrepreneurship. The following artifacts from the future are fictional—despite how real some may look. 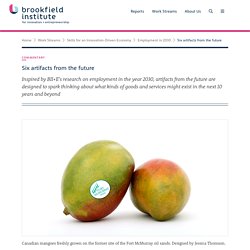 They are designed to spark thinking about what the future might bring. Emerging from the Crisis. Executive Summary One night some time ago I was in a movie theater in Los Angeles when an earthquake struck. 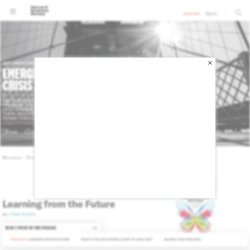 It was a rather long one, with several aftershocks. I remember distinctly that people in the theater seemed to fall naturally into one of three groups: Some panicked and moved chaotically, unsure what to do or where to go. Some remained calm and moved to the emergency exits, just as the preshow announcement had suggested they should. Emerging from the Crisis. Building a Foresight System in the Govt Lessons from 11 Countries Oct 2017.

Five game changers that could shape the future of work. For young people, job prospects looked uncertain before COVID-19. Now they're downright grim. Buried deep within the federal bureaucracy is a group of smart crystal-ball-gazers who predict the future and warn policy-makers about the implications. 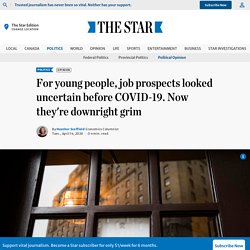 About 10 months ago, the Policy Horizons prognosticators looked at the future of work and painted a picture of unpredictable employment, short-term gigs, people replaced by machines and a lot of workers doing their jobs from remote locations. Automation is everywhere. Some people thrive, and others sink, with the dividing line being their compatibility with the digital economy. Five game changers that could shape the future of work. Maturing tech shifting workplaces, economy: report. Ten predictions for 2020. Ten predictions for 2020. I tried to glitch the simulation and all I got was a bottle of pee. Given that modern life is so regularly baffling, it can sometimes feel like the only explanation for it all is that we’re collectively experiencing a Sims playthrough as directed by some sadistic cosmic being. 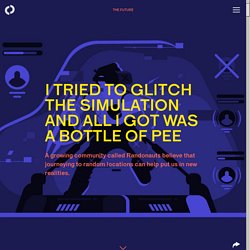 But what if there was a way to pull back the curtain — to gain another perspective on the high-definition simulation we call reality, and to unravel the physical mysteries of our world? A small but quickly growing online community believes that transforming randomly generated numbers into clusters of location data could help us tunnel out of reality. Bloomberg - Are you a robot? Here’s why trade unions should practice foresight to shape the future of work - Equal Times. A recent Forbes article described how business leaders are using new technologies, big data and analytics to do business, and yet, despite the apparent control and understanding this gives them over their environment, they are still confronted with the impacts of unpredictable economic shocks, volatility, ambiguity and complexity. 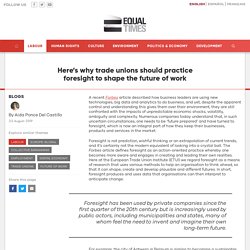 Numerous companies today understand that, in such uncertain circumstances, one needs to be ‘future prepared’ and have turned to foresight, which is now an integral part of how they keep their businesses, products and services in the market. Foresight is not prediction, wishful thinking or an extrapolation of current trends, and it’s certainly not the modern equivalent of looking into a crystal ball. Maturing tech shifting workplaces, economy: report. The combination and maturation of artificial intelligence (AI) and automation will redefine the workplace forever, according to a new report from the federal government. 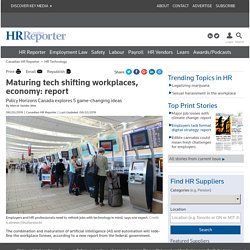 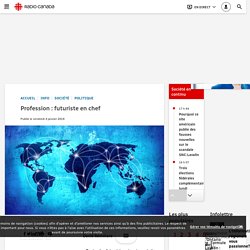 Ce nouveau « contexte » ainsi créé, poursuit M. The coolest government org you’ve never heard of. Fart jokes are not quite the same when you hang out with the crowd at Policy Horizons, the federal government’s in-house strategic foresight think tank. 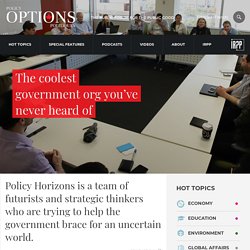 It took me a while to figure out the lingo when I stopped by for a visit at its downtown Ottawa offices. (It turns out that “fart” — or rather “FARTS” — stands for Fully Automated Rapid Transit System, but more on that later.) Actually, everything about the place — the talk, the workspace, the approach to advising government on policy — takes a moment to absorb. Over my 20 years working as a journalist in Ottawa and hanging with bureaucrat friends, I’ve been programmed to think of the public service as being a certain way: largely risk-averse, insular and slow-moving. But here, instead of the typical cubicle farm, are rooms covered in sticky notes and writing on the walls (wipeable walls, who knew?). Profession: futuristes… et fonctionnaires. Imagining Canada's Future - 2018 Consultation. Emerging future global challenges raise the possibility of opportunities and new directions for societies as well as warnings of potential crises. 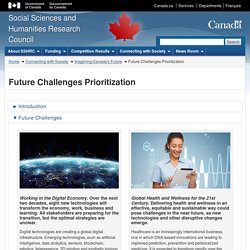 The following briefly summarizes the 16 future challenges identified through a recent horizon scan, including the key changes contributing to each challenge as well as its potential impacts. The challenges explored here have several shared characteristics. They are emerging problems with the potential to shape society in profound ways. Each challenge is multidisciplinary and requires broad cooperation to solve. Radio-Canada - Le futur n'est pas de la fiction : Kristel Van Der Elst (Conférence d'ouverture) Choice page. How to Make Strategic Foresight Matter. The Future 100 - JWT Intelligence. Can This Board Game Prepare You For The Future Of Work? Other than a brief chat with a college career counselor, or that time a family member asked what you wanted to be when you grew up, has anyone encouraged you to look into the future? Were you ever formally taught how to develop your capacity for foresight? Me neither. A new game called IMPACT, by the innovation and design firm Idea Couture, wants to change that.

Given how rapidly the workforce is evolving—not to mention life's inherent uncertainty—IMPACT's creators felt it might be useful to help people sharpen their ability to anticipate and respond to unexpected change, especially when it comes to their careers. Playing Games With Your Career. Challenge Online. Why the next 20 years will see a lot less technological disruption than the past 20. What Earth Will Be Like 100 Years in the Future. Predicting the future can be a fool’s errand.

Need proof? Just look at our previous post showing a timeline of failed tech predictions by some of the biggest names in business, academia, and technology over the last two centuries. Experts not only get it wrong – they get it embarrassingly wrong. New Foresight project launched on the future of the sea. The Government Office for Science has launched a new Foresight project which will look at the important future trends, challenges and opportunities for the UK from the sea. The sea covers 70% of the world’s surface and is essential to regulating global temperature, oxygen and water.

Possible Canadas - Why the pessimists are wrong about the future of economic growth. There is an active economic debate today about whether we have reached a structural slowdown in economic growth due to the fact that fundamental technological progress is over. 2.1_Foresight_in_governments.pdf. Envisioning 2030: US Strategy for the Coming Technology Revolution. December 09, 2013 The Atlantic Council’s 2012 report Envisioning 2030: US Strategy in a Post-Western World, written as a companion piece with the US National Intelligence Council’s Global Trends 2030: Alternative Worlds, stated, “the keystone of national power remains US economic strength and innovation.”

Hinesight....for Foresight. Shell Let's Go. Felix Dodds comments on sustainable development and life. So You Think You're Smarter Than A CIA Agent : Parallels. A group of 3,000 ordinary citizens, armed with nothing more than an Internet connection, is often making better forecasts of global events than CIA analysts. Here, a man crosses the CIA logo at its headquarters in Langley, Va. Saul Loeb/AFP/Getty Images hide caption itoggle caption Saul Loeb/AFP/Getty Images. Preparing for the impact of disruptive technologies.

Preparing for the impact of disruptive technologies. Governing for the Future: How to Bring the Long-Term Into Short-Term Political Focus. How Future Thinkers Can Revolutionize Strategic Planning - Promising Practices. Risk Science Center Mapping global risks and opportunities in 2015 - Risk Science Center. Over the next few days, I’ll be joining experts from around the world to address emerging global trends and challenges at the World Economic Forum Summit on the Global Agenda. The Myanmar Futures Exchange: Development at the Cross-Roads. Coping with Policy in Foresight. BoC to use anecdotal evidence, people conversations in economic forecasts: Poloz. The strength of ‘weak signals’ Hinesight: For Foresight Use Hinesight.