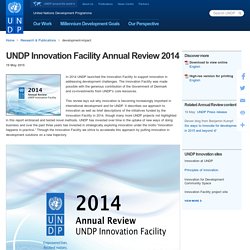 The Innovation Facility was made possible with the generous contribution of the Government of Denmark and co-investments from UNDP’s core resources. Aloha_futures : @nraford opening #UNDP4Future ... New thesis on Corporate Foresight in US companies confirms value contribution. Doug Nash, recently published his thesis in which he share insights in the corporate foresight practices of US companies. 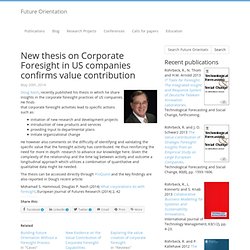 He finds that corporate foresight activities lead to specific actions such as: initiation of new research and development projectsintroduction of new products and servicesproviding input to departmental plansinitiate organizational change He however also comments on the difficulty of identifying and validating the specific value that the foresight activity has contributed. He thus reinforcing the need for more in depth research to advance our knowledge here.

Given the complexity of the relationship and the time lag between activity and outcome a longitudinal approach which utilizes a combination of quantitative and qualitative data might be needed. The thesis can be accessed directly through ProQuest and the key findings are also reported in Doug’s recent article: Mohamad S. The “compressed foresight” of deterministic sustainability thinkers (such as Paul Gilding) Consider these contrasting perspectives. 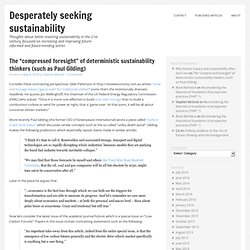 Giles Parkinson in writes: “Solar and storage means “game over” for traditional utilities” (note: that’s the intentionally dramatic headline). He quotes Jon Wellinghoff, the chairman of the US Federal Energy Regulatory Commission (FERC) who stated: “Once it is more cost-effective to build solar with storage than to build a combustion turbine or wind for power at night, that is ‘game over.’ At that point, it will be all about consumer-driven markets.” More recently Paul Gilding (the former CEO of Greenpeace International) wrote a piece called “Carbon Crash Solar Dawn” which discusses similar concepts such as the so-called “utility death spiral”.

Gilding makes the following predictions which essentially repeat claims made in similar articles: “I think it’s time to call it. Later in the piece he argues that: “…economics is the best lens through which we can both see the triggers for transformation and are able to measure its progress. Foresight Jobs Unconference - Strategic Foresight (Melbourne. Foresight Careers 2013. New evidence on the value contribution of corporate foresight. In a recent article we report on the results of a survey among 77 large multinational companies. 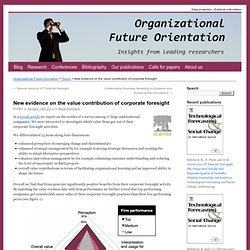 The Future of Cities in the Asia-Pacific. Hi there, In a couple of weeks we’re off to the Asia-Pacific Foresight Conference in Perth where we’ll be talking about the Foresight Epidemic and asking for feedback from our colleagues about what we’re up to. 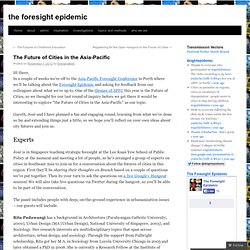 One of the themes of APFC this year is the Future of Cities, so we thought for our last round of inquiry before we get there it would be interesting to explore “the Future of Cities in the Asia-Pacific” as our topic. Gareth, José and I have planned a fun and engaging round, learning from what we’ve done so far and extending things just a little, so we hope you’ll reflect on your own ideas about city futures and join us. Experts José is in Singapore teaching strategic foresight at the Lee Kuan Yew School of Public Policy at the moment and meeting a lot of people, so he’s arranged a group of experts on cities in Southeast Asia to join us for a conversation about the futures of cities in this region. (Global times are here: What Do You Think? Post your image anonymously here: Key Dates. Lessons from “Futures of Work” For those of you joining in at this point, Gareth, José and I have opened this blog (and similarly named spaces on multiple platforms like Facebook and Twitter) as a platform for piloting some approaches to doing open foresight in a public way using social media. 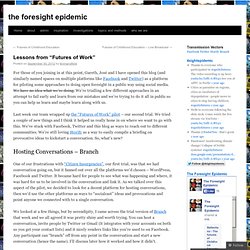 We have no idea what we’re doing. We’re trialling a few different approaches in an attempt to fail early and learn from our mistakes and we’re trying to do it all in public so you can help us learn and maybe learn along with us. Last week our team wrapped up the “Futures of Work” pilot – our second trial. We tried a couple of new things and I think it helped us really hone in on where we want to go with this. We’ve stuck with Facebook, Twitter and this blog as ways to reach out to different communities. Hosting Conversations – Branch One of our frustrations with “Citizen Insurgencies”, our first trial, was that we had conversation going on, but it fanned out over all the platforms we’d chosen – WordPress, Facebook and Twitter. Members - Strategic Foresight (Melbourne. Challenge 14: the road to innovation transformation. In part 14 of our multi-disciplinary Millennium Project series, Stephen McGrail argues that boosting innovation requires us to change our thinking as much as our technology. 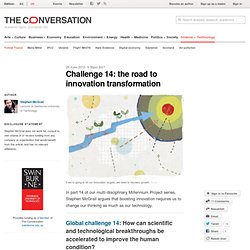 Global challenge 14: How can scientific and technological breakthroughs be accelerated to improve the human condition? We are in the early stages of learning how to harness science and technology – and more broadly, innovation – to help meet contemporary challenges, such as climate change and Australia’s rapidly ageing population. Transforming our approach to innovation is particularly important for emerging science and technologies. Recent events highlight the issues being grappled with, including: the destruction of CSIRO GM-wheat research crops by Greenpeace; the questioning of the safety of sunscreens containing “nanoparticles”; and UK House of Lords’ conclusion that the reluctance of food and packaging sectors to communicate openly about nanotechnology may create a public backlash.

A mixed report card. A02. A03. Using FORESIGHT to grow your business. Balancing between the TELESCOPE and the MICROSCOPE ! What is “ foresight ” in business decision making? In simple words : trying to understand what the future will look like, and making a decision to be part of it! The Baloney Detection Kit: A 10-Point Checklist for Science Literacy. FERN. Foresight and Futures Studies Graduate Programs - Global List. The following graduate programs offer education in foresight (also known as strategic foresight, futures studies, prospective studies, prognostics, futurology, futuring, and futuristics) and related disciplines. 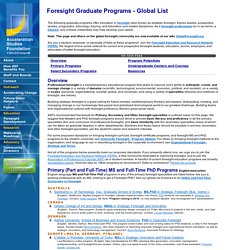 As a foresight professional (or in lay terms, a futurist), any of these credentials may help develop your career. Note: This page and others on the global foresight community are now available at our wiki, GlobalForesight.org Are you a student, employer, or advocate of folks at these programs? Master of Strategic Foresight at Swinburne University of Technology, Melbourne, Australia. Course structure To qualify for the award of Master of Strategic Foresight, students must complete six units, including two double units (100 credit points) in addition to the Graduate Certificate of Management Studies (or equivalent). 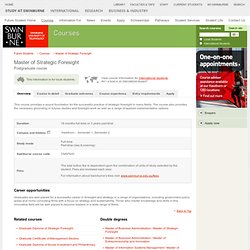