Strategic Futures Overview. Why are some foresight tools more equal than others? The Future is More Terrifying Than We Can Imagine. For some reason, though, we like to think we do. 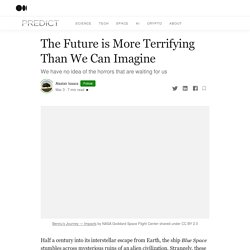 Predictions of the future invariably imagine a world based around familiar technologies, only bigger and more powerful. We apply such thinking to imagining possible alien intelligence too, as the example of SETI shows. For decades researchers have been scanning the skies for unexplained radio signals coming from the stars. Three Horizons 18 Sept 2013 - Basic Introduction. Futures and Strategic Foresight Podcasts We Love — AVENEAR. A Chapter In U.S. History Often Ignored: The Flight Of Runaway Slaves To Mexico. FIBRES foresight software. You’re Experiencing Future Shock — It’s Why You Can’t Think Straight. I used to look forward to the future. 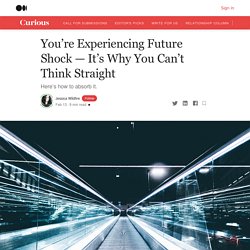 Now it paralyzes me. To deal with this, I slip on an Oculus headset my husband got last Christmas and sit there in the home screen environment, a warm cabin in the mountains under the northern lights. I don’t play any games. Instead I pretend this is where I live, away from everything, in nature. Fun with scenario archetypes. I have been messing around with and shared some actual work on using scenario archetypes. 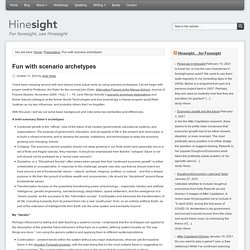 Let me begin with proper credit to Professor Jim Dator for the concept [Jim Dator, Alternative Futures at the Manoa School, Journal of Futures Studies, November 2009, 14(2): 1 – 18. ] and Wendy Schultz’s scenario archetype elaborations and former futurist colleague at the former Social Technologies and [not surprisingly a Hawaii program grad] Mark Justman as my key influences, and probably others that I’ve forgotten. With this post, I will lay out some basic background and note some key similarities and differences. A brief summary Dator’s archetypes Continued growth is the “official” view of the future of all modern governments, educational systems, and organizations.

The 14 rules for predicting future geopolitical events. Nations are eccentric. 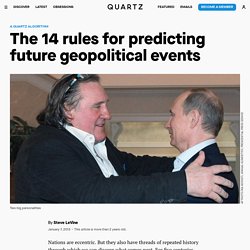 But they also have threads of repeated history through which we can discern what comes next. For five centuries, since Ivan the Terrible, for instance, Russia has been characterized by one-man rule, an exaggerated sense of identity, and an acceptance of often deadly cruelty toward individual citizens. Therefore, it is not surprising that those traits are the bricks and mortar of Vladimir Putin’s rule today.

Many political scientists dismiss the detection of such trends as “deterministic.” Trump Made My Worst-Case Predictions for 2020 Look Tame. Three rules governed my first forecast about post-election upheaval. 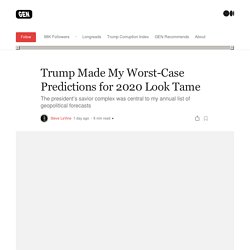 They began with the Injustice Rule, which explains what happens when a critical mass of people possess a gargantuan, primordial grievance, feel they cannot get a fair shake, and sense their children won’t fare better than they have. When that occurs, such people can rise in revolt. We have seen this play out again and again — in the Middle East, for example, and in the former Soviet Union. Leah Zaidi on LinkedIn: #futures #design #foresight. Megatrends for this decade – XXXIV – IEEE Future Directions. The Future of work This Megatrend is possibly the most complex one to analyse, and for that reason I left it at the end of this foresight exercise. 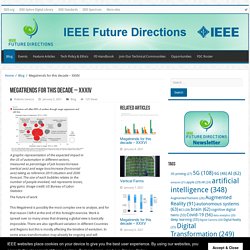 Work is spread over so many areas that drawing a global view is basically impossible. There are also significant variation in different Countries and Regions but this is mostly affecting the timeline of evolution. In some areas transformation may already be ongoing and will complete within this decade, in others it has not started yet and may be far for completion by the end of the decade.

However, it is mostly a matter of time (and local policies may have a significant impact). When looking at the future of work we can do that from several points of view. Even at first glance, it is clear that the impact of automation in the 15 sectors considered results in lower wages and loss of jobs (11 red bubbles signalling a loss, versus 4 grey bubbles showing a gain). More to follow. Megatrends for this decade – XXXVI – IEEE Future Directions.

(338) TIMELAPSE OF FUTURE TECHNOLOGY: 2022 - 4000+ Five Principles for Thinking Like a Futurist. Thinking about the future allows us to imagine what kind of future we want to live in and how we can get there. 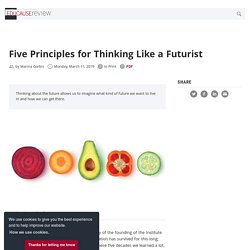 Which type of futurist are you? As part of my doctoral research on “Integrating Foresight into Organizations,” at Leeds Metropolitan U, I’ve had to think about the different types of futurists in thinking through what “success” is for foresight, as different types are likely to have different expectations for success. 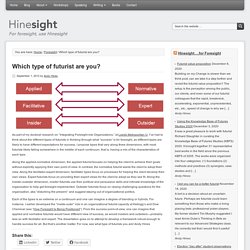 I propose types that vary along three dimensions, with most futurists likely falling somewhere in the middle of each continuum, that is, having a mix of the characteristics of each type. Along the applied-normative dimension, the applied futurist focuses on helping the client to achieve their goals without explicitly applying their own point of view. In contrast, the normative futurist wants the client to adopt their view. Along the facilitator-expert dimension, facilitator types focus on processes for helping the client develop their own views. Expert futurists focus on providing their expert views for the client to adopt as they see fit. 'The Ministry for the Future': A New Sci-Fi Novel About Climate Change. Who knew that in this dark hour of the climate crisis hope would arrive in the form of a 563-page novel by a sci-fi writer best known for a trilogy about establishing a human civilization on Mars? 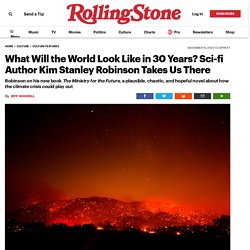 But alas, that’s what Kim Stanley Robinson – the author of 20 books and one of the most respected science fiction writers working today — has given us with The Ministry for the Future. Future Timeline. 2021- The Year of Transcendence. Thinking Like A Futurist is the #1 Skill For Leaders: Here’s How to Master It. Futures Thinking: A Mind-set, not a Method. Meanwhile, design expertise helps us communicate the abstract future concepts that we envision. Illustrating a possible future scenario through a visual or physical artefact is significantly more powerful than describing it through language alone (See Fig. 2 and Fig. 3). This helps our clients, users and project stakeholders better empathise with the human experiences that might exist within the described future scenario. In blending design and futures approaches, we embed principles from futures thinking into our design practice, two of which we will discuss here in further detail. From start to finish, throughout project scoping, research phases, fieldwork, synthesis, testing and refining, we: This principle manifests itself at several points throughout any given project. FEDERAL FORESIGHT COMMUNITY OF INTEREST – Focusing on the latest news and events affecting the FFCOI community. Corporate foresight and its impact on firm performance: A longitudinal analysis. Ansoff, 1980 H.I. AnsoffStrategic issue management Strateg.

Manag. J., 1 (2) (1980), pp. 131-148 Battistella, 2014. Rethinking Humanity — RethinkX. Alibaba and the Golden Key: Scenarios of Manufacturing Futures in Egypt * Journal of Futures Studies. Human Traits in an Exponential World. Our exponential world puts increasing pressure on our capacity to innovate and the speed and quality of idea flow. This dynamic coupled with the speed at which automation is likely to occur brings our right brain characteristics front and center. Creativity, imagination, big picture vision, emotional and social intelligence, empathy, and other human characteristics are critical to navigating in this emerging future.

The Future Of Jobs. Data gathered by LinkedIn, Coursera and… The Future is Now. New technological innovations herald… Shaping Our Future: A Strategic Framework - Texas 2036. The Most Influential Person In Modern History. Gavrilo Princip would never live to see the fruits of his actions. Shockingly enough, he only received a 20 year sentence for his action due to his age. According to Austria-Hungary’s legal system, capital punishment couldn’t be applied to anyone under the age of 20. 2045 Initiative. The missing scenario. "Any useful statement about the future should at first seem ridiculous" — Dator's Law, Futurist Jim Dator, University of Hawaii Manoa, [Source] Daniel Burrus posted on LinkedIn. The Rise Of The Futurist - Predict - Medium. 🔗 This article was originally published at FutureMonger.com. Eu.usatoday. The Future Today Institute. The cataclysmic events of the past year resulted in a significant number of new signals.

As a result, we've analyzed nearly 500 tech and science trends across multiple industry sectors. In our 14th annual Tech Trends Report, we have published 12 separate reports with trends grouped by subject. It’s 2020 – so where’s the paradise politicians promised us?