Business models, MOOCs and disruptive innovation. One of the most interesting presentation I heard at the recent EADTU Conference in Paris was Variable cost minimisation (VCM) business models in higher education by Yoram Kalman of the Open University Israel. 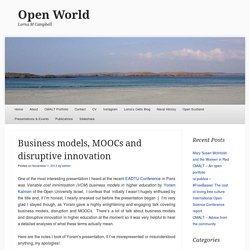 I confess that initially I wasn’t hugely enthused by the title and, if I’m honest, I nearly sneaked out before the presentation began :} I’m very glad I stayed though, as Yoram gave a highly enlightening and engaging talk covering business models, disruption and MOOCs. On Workload. We The Educators — a personal perspective – Learning {Re}imagined – Medium. Catalysing a global conversation about our children’s future and their education So this week saw the culmination and launch of several months work with a wonderful international team of collaborators intent on starting a new conversation about the future of public education. 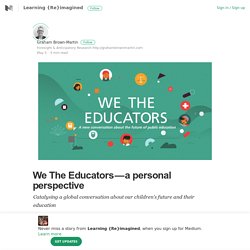 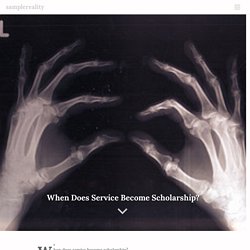 When does anything—service, teaching, editing, mentoring, coding—become scholarship? My answer is simply this: a creative or intellectual act becomes scholarship when it is public and circulates in a community of peers that evaluates and builds upon it. Now for some background behind the question and the rationale for my answer. What counts as the threshold of scholarship has been on my mind lately, spurred on by two recent events at my home institution, George Mason University.

The first was a discussion in my own department (English) about the public humanities, a concept every bit as hard to pin down as its two highly contested constitutive terms. RE-ENVISIONED. When Does Service Become Scholarship? Creative teaching in the age of austerity. Developing the ability of teachers to think creatively has become a financial necessity for schools. 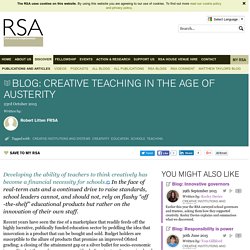 In the face of real-term cuts and a continued drive to raise standards, school leaders cannot, and should not, rely on flashy “off -the-shelf” educational products but rather on the innovation of their own staff. Recent years have seen the rise of a marketplace that readily feeds off the highly lucrative, publically funded education sector by peddling the idea that innovation is a product that can be bought and sold.

Children with special needs are being turned away from 'underfunded' state schools, councils report - Schools Improvement Net. The Independent reports that the number of pupils with additional educational needs or disabilities attending specialist schools has risen substantially in the past four years, putting cash-strapped local councils under increasing pressure, LGA warns. 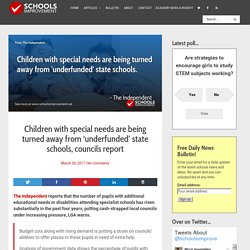 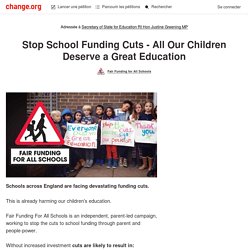 This is already harming our children's education. Fair Funding For All Schools is an independent, parent-led campaign, working to stop the cuts to school funding through parent and people-power. Without increased investment cuts are likely to result in: Government misses teacher recruitment target for fifth consecutive year - by a lot - The London Economic. The Financial Sustainability of Schools inquiry. Open Report published 29 March 2017. 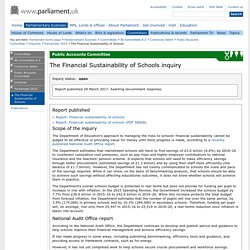 Awaiting Government response. Report published. OER risks: why not being open now costs us money in the future. – Melissa Highton. It’s that time of year again. 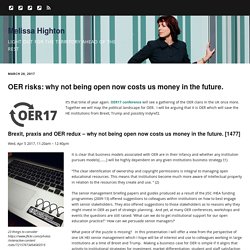 OER17 conference will see a gathering of the OER clans in the UK once more. Together we will map the political landscape for OER. I will be arguing that it is OER which will save the HE institutions from Brexit, Trump and possibly Indyref2. Wed, Apr 5 2017, 11:20am – 12:40pm. The Dangers of Knowing A Little: Pseudo-Journalism and Education Discourse. I recently saw an article from The Atlantic making the rounds on my various social media feeds. 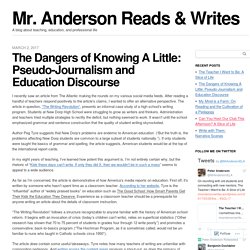 After reading a handful of teachers respond positively to the article’s claims, I wanted to offer an alternative perspective. The article in question, “The Writing Revolution”, presents an informal case study of a high school’s writing program. Students at New Dorp High School were struggling to grow as writers and thinkers. Administration and teachers tried multiple strategies to rectify the deficit, but nothing seemed to work. It wasn’t until the school emphasized grammar and sentence construction that the quality of student writing skyrocketed.

Author Peg Tyre suggests that New Dorp’s problems are endemic to American education (“But the truth is, the problems affecting New Dorp students are common to a large subset of students nationally.”). Openness, a practice for innovation in higher education – E-Learn. Read the PDF Openness has been a feature of higher education for decades thanks to the establishment of open universities and digital technologies. 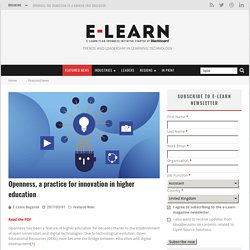 Due to technological evolution, Open Educational Resources (OERs) have become the bridge between education and digital development[1]. The concept of openness Openness is seen as a fundamental value that supports societal changes and is necessary for higher education institutions aiming to promote change while being relevant for everyone[2]. Three quarters of the public think teachers contribute greatly to society’s wellbeing, poll shows. Almost three quarters of the public believe that teachers are among those that contribute the most to society’s wellbeing, according to a survey. New research has revealed that 73 per cent of people feel teachers give as much to society as firefighters, with only doctors (87 per cent) and hospital workers (81 per cent) ranking higher.

The YouGov survey, commissioned on behalf of the Fire Brigades Union (FBU), showed that teachers were ranked ahead of nine other professions, including police officers (67 per cent), scientists (53 per cent) and engineers (34 per cent). More than 1,000 survey respondents were asked to choose six professions that they felt contributed most to society’s wellbeing. 'We must cherish our professional status as teachers' During a recent trip to the doctor, I couldn’t help but notice the array of qualifications displayed prominently above the GP’s desk. There is clearly a sense of pride amongst doctors about their professional status. I think it is fair to say that this is also true of many other professions, such as lawyers or accountants.

Bob Awesome collected this story. Teacher shortage getting worse, say MPs. Sir Ken Robinson: Bring on the learning revolution! He who pays the piper – Distant Ramblings on the Horizon. You may have seen the reports in the press this week about the plans to set up a series of low cost independent schools which would charge parents just £2,700 per annum.

Not only is this way below the average costs of a place in an average independent school where costs are £13,566, but it is also considerably below the cost of the average student in a state maintained school. Whilst many of the reports have taken this plan at face value I guess we shouldn’t get too excited about what is in essence a PR stunt. But I do think it’s an interesting exercise to see if such a school is even possible. There are many ways to look at the cost of such a school but I though I’d try and do it as simply as possible (given that all figures will be educated guesswork) and work it out in terms of numbers of kids per class.

The median primary school teacher salary in England is around £24,400. Now this teacher needs a classroom to teach in. #15toptips for Student-Centred Teaching 1: Trust your students and they will trust you. Teaching in higher education can be hugely rewarding experience. However, most of us teaching in higher education found our way into this role because we had previously built-up a considerable body of discipline-specific expertise via our research. Demand for Digital Courseware Is Higher Than Supply, Survey Says. Now, more than ever, higher education stakeholders believe digital course materials are the key to solving systemwide problems. A recent Pearson Education survey called “Digital appetite vs. what’s on the table,” found that at least 84 percent of students, teachers and administrators said a shift to digital could help with challenges they face. About 82 percent of those surveyed also said that digital is the future, but only 56 percent said more than half of their institution’s courses are using some sort of digital courseware.

“In this gap, we see a clear and vast opportunity to transform the classrooms of today, for educators to be key allies in advancing teaching and learning through innovative and research-driven technology, and to ensure that their technology experience in education matches the digital reality that today’s students are embracing in their day-to-day lives,” reads the survey. Open leadership involves becoming a master of balance. Open leaders are systems thinkers. When they look at the world, they see a series of dynamic relationships—between people, teams, and resources. These relationships are the elements that are always in motion, always in flux, and ultimately drive the success (or failure) of our businesses.

In fact, the problems that drive us today demand this kind of thinking, because solving them requires us to think beyond the walls of our organizations and devise ways we can leverage the best talent, the best resources, and the best ideas from anywhere. Future Teacher – Just another thinking.is.ed.ac.uk site. What is the meaning of free? – Enrichmentality. Paris's École 42 University wants to launch the next Zuckerberg. Education Technology and the 'New Economy' 21 min read. Openness as a Value. Even top teachers ‘not recognised or compensated’, warns research. Top teachers at research-intensive universities are not seeing their passion for and commitment to their work matched by their institutions, according to new research. The findings of the US study, which drew on interviews with award-winning teaching faculty, point to a series of challenges that teaching staff must overcome to succeed in such universities.

These include the shortage of time for course preparation, marking, planning and development, the lack of recognition for their efforts and the effect of emerging technology on student attitudes – all of which suggests that research-intensive universities lack the policies to support teaching in the same way that they do for research. Carolyn Mitten, doctoral fellow, and Dorene Ross, professor emeritus, both at the University of Florida’s College of Education, interviewed 10 teaching staff who had won undergraduate teacher of the year accolades at a large US research-intensive institution about the challenges they face.

Educators making copyright work for them – Copyright Untangled – Medium. ‘Collegiality’ has become an empty word. Humanities Commons: Networking the Humanities through Open Access, Open Source and Not-for-Profit. Robots, virtual reality and the future of education. RT @NachhaltigesNRW Andreas Schleicher of @OECD #EU2030: Education is the backbone of Sustainable Development. EU is lagging behind. Blended Learning in Higher Education. Curriculum for Digital Education Leadership: A Concept Paper. A Siri for Higher Ed Aims to Boost Student Engagement. The Presentation Escape Hatch: Blogging My #OpenEd16 Talk. Can technology replace teachers? You asked Google – here’s the answer. Faculty Members’ Instructional Priorities for Adopting OER. In Search for the Open Educator: Proposal of a Definition and a Framework to Increase Openness Adoption Among University Educators.

Open educational practices: on not being (much) published – helenbeetham. A Domain of One’s Own. Creative Commons at WIPO: Supporting a more fair copyright for teaching and learning. Nottingham academic on casual contract: 'I had more rights as a binman' Shouldn't lectures be obsolete by now? Ed Tech and the circus of unreason – helenbeetham.

University opens without any teachers. Introduction to Structured Data   UnderstandingMetadata. Metadata Definition. Computers are replacing foreign language teachers in US high schools — Quartz. Seven ways to think like the web. Working openly on the web: a manifesto. A Domain of One's Own in a Post-Ownership Society. Literacies.