EcoLoo: How a poop on Everest inspired a new type of toilet. No really, it can happen. 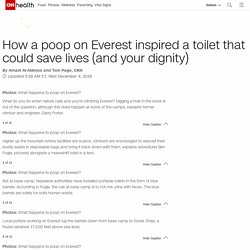 Take Zuraina Zaharin from Malaysia. She's built a business off the back of a loo break. Not just any loo break, of course. This one was near Everest in the early 2000s when she was climbing in the region -- and it was pretty bleak. "I was facing this problem: the toilet," she explains. Things didn't improve upon discovering the facilities, however. The problem hasn't exactly gone away. It was an extreme example of unsafely managed sanitation -- something 4.5 billion people have to live with, according to the World Health Organization.

Zaharin, an entrepreneur, adventurer and environmentalist, did not forget her Everest experience. Imad Agi from Sweden conceived a waterless toilet system that turns human waste into fertilizer without the harmful germs that can cause sickness if used in agriculture -- ideal for organic farming. Agi and Zaharin went into business together as co-founders of EcoLoo, refining the toilet and taking it to market.

6 Futuristic Toilets You Might See In Your Bathroom One Day. How do you build a better toilet--one that's safe, cheap, and efficient enough to serve the 2.5 billion people who currently lack access to safe sanitation? It's a question that the Bill and Melinda Gates Foundation has grappled with for years, offering grants to all sorts of initiatives that promise to one day improve the depressing statistics around toilet use. Sanitation-related diseases kill more people than malaria, measles, and HIV/AIDS combined, according to the CDC.

Over the past few years, 16 teams have received grants to rethink the toilet. In late March, the foundation announced the winners of its latest toilet-reinvention challenge: a group of six out-there prototype toilets from Indian researchers that will be at least partially funded by grants from the Gates Foundation. In 2011, the Gates Foundation launched the Reinvent the Toilet Challenge, which asked budding toilet researchers to come up with safe, cheap, and hygienic waterless toilets. India 'missing' 37 million lavatories, campaigners claim. Twitter. It's Time to Start Giving a Shit About Toilets. Across an arid summer moonscape in middle-of-nowhere rural Zambia, villagers gather around Chief Macha of Choma to discuss a pressing, unspoken issue: shit. 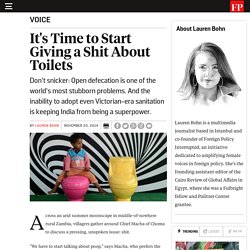 "We have to start talking about poop," says Macha, who prefers the title King of Shit. "Poop is our biggest enemy right now. " For the past six years, Macha has gone from village to village campaigning on a simple slogan: "No shit, please! One family, one toilet. " He has helped families build their own toilets and has lobbied the Zambian government for more assistance.

"All these aid people come here, giving us mosquito nets … pills. In the development world, those basics have been woefully covered. "In terms of the MDGs, we're most behind in sanitation," says Louise Maule, a sanitation and hygiene specialist at UNICEF, which is spotlighting sanitation through its second annual World Toilet Day on Nov. 19. "We're trying to ramp up the work. It's also at the core of enormous health and economic costs. 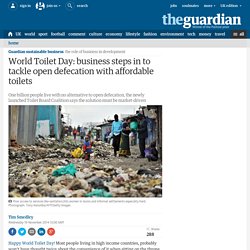 Most people living in high income countries, probably won’t have thought twice about the convenience of it when sitting on the throne this morning. But for the 2.5 billion in the world without access to proper sanitation, it is a serious health issue. One billion people have no alternative to open defecation and sanitation has proved the most intractable of the Millennium Development Goals. The business world is stepping in.

Launched today, the Toilet Board Coalition brings together a range of businesses, NGOs and water, sanitation and hygiene (WASH) experts united by the same belief: that sustainable solutions must be market-driven. Chaired by Unilever, its members include US sanitation giant Kimberly Clark, Japanese toilet maker LIXIL, German chemicals and odour company Firmenich, and NGOs such as WaterAid, World Toilet Organisation and Water and Sanitation for the Urban Poor (WSUP).