Maybe I was wrong about Joe Biden – is he actually the progressive president I was waiting for? Stacey Abrams Has a Plan to Dismantle the Filibuster and Protect Voting Rights. After a hard election, the real work begins, say analysts and scholars. What is your initial response to the election results and do the results offer any insights into the future? 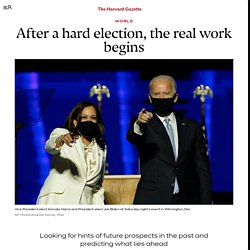 Professor of Government, director of the David Rockefeller Center for Latin American Studies How rickety and out-of-date our electoral administration is, though it was robust enough to withstand an extremely difficult election. The health crisis, the massive increase in mail-in voting, and extreme polarization — any number of things could have gone wrong. Biography & Facts. Strom Thurmond, in full James Strom Thurmond, (born December 5, 1902, Edgefield, South Carolina, U.S. 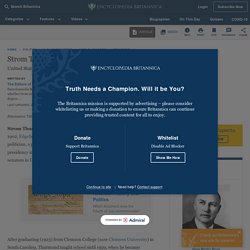 —died June 26, 2003, Edgefield), American politician, a prominent states’ rights and segregation advocate who ran for the presidency in 1948 on the Dixiecrat ticket and was one of the longest-serving senators in U.S. history (1954–2003). Britannica Quiz American History and Politics. Jason Crow. U.S. 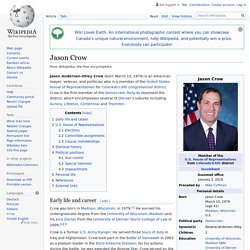 Representative from Colorado Early life and career[edit] Crow was born in Madison, Wisconsin, in 1979.[1] He earned his undergraduate degree from the University of Wisconsin–Madison and his Juris Doctor from the University of Denver Sturm College of Law in 2009.[2][3] U.S. House of Representatives[edit] Elections[edit] On April 17, 2017, Crow announced his intention to run to represent Colorado's 6th congressional district in the United States House of Representatives.[6][7] In the Democratic primary Crow ran against progressive businessman Levi Tillemann.[8] Crow defeated incumbent Republican Mike Coffman in the general election on November 6.[9] Crow received 54% of the vote, and won two out of the three counties in the district.[10][11] He is the first Democrat to represent the district since its creation in 1981-82.

Sean Faircloth. Sean Faircloth (born May 23, 1960) is an American writer and politician from Maine, he served as the State Senator for Bangor, Maine, as Mayor until November 2016 and as of 2017 he is serving as a Bangor City Councilor.[1][2][3] He is also an attorney and five-term state legislator. 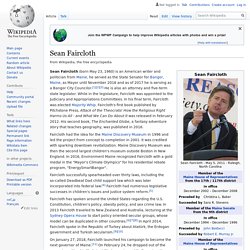 While in the legislature, Faircloth was appointed to the Judiciary and Appropriations Committees. How Joe Biden Wins It All. This article is part of Frank Bruni’s newsletter. 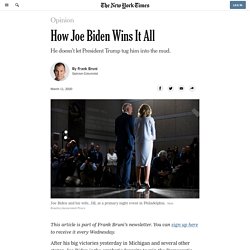 You can sign up here to receive it every Wednesday. After his big victories yesterday in Michigan and several other states, Joe Biden is the emphatic favorite to win the Democratic presidential nomination. Read Bernie Sanders’s Full Speech About Staying in the Race. After a disappointing showing in Tuesday night’s primaries, Senator Bernie Sanders addressed his future in the 2020 primary race in a news conference Wednesday afternoon. 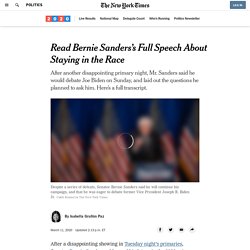 He said he planned to stay in the race through Sunday night’s debate, where he will face off against former Vice President Joseph R. Biden Jr., and he posed a series of questions to Mr. It's Time for Bernie Sanders to Drop Out. Bernie Sanders’s signature issue is Medicare for All: a vision of state-financed health care for every American. 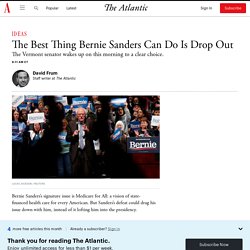 But Sanders’s defeat could drag his issue down with him, instead of it lofting him into the presidency. Yet he has an opportunity before him at least to advance his idea. The spread of the coronavirus is raising demand for a more socialized approach to health care: free vaccinations, stricter control of insurance companies, paid sick leave, income support for laid-off workers. By ominous coincidence, the number of known COVID-19 cases in the United States passed 1,000 on the same day that Sanders lost primaries in Idaho, Michigan, Mississippi, and Missouri. This Is Not the Moment for Progressives to Despair. We’ve Been Looking in the Wrong Places to Understand Sanders’s Socialism. Howells’s socialism originated in an ethical crisis. 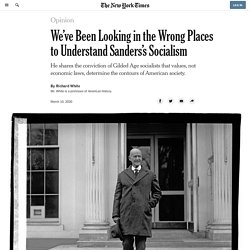 Joe Biden, Not Bernie Sanders, Is the True Scandinavian. It is through these engines of capitalism, free trade, economic openness and globalization that Denmark has managed to become wealthy enough to afford the social safety net that Sanders rightly admires — as do I: access for all to child care, medical and parental leave from work, tuition-free college, a living stipend, universal health care and generous pensions. 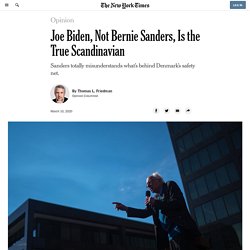 But there is nothing free about these services. According to Investopedia, Denmark’s progressive income tax tops out at 55.8 percent, and the average individual pays 45 percent. The Danes pay an 8 percent labor market tax, a 5 percent health care tax, as well as hefty municipal taxes and a social security tax. The Futility of Bernie Sanders. What should lifelong democratic socialists and social democrats, like me, think about Bernie Sanders, the democratic socialist? 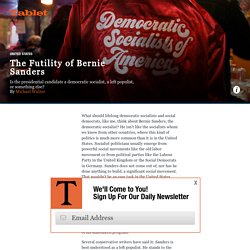 He isn’t like the socialists whom we know from other countries, where this kind of politics is much more common than it is in the United States. Socialist politicians usually emerge from powerful social movements like the old labor movement or from political parties like the Labour Party in the United Kingdom or the Social Democrats in Germany. Sanders does not come out of, nor has he done anything to build, a significant social movement. After spending $500M, Mike Bloomberg drops out of 2020 presidential race. LOS ANGELES — In just over 100 days, Michael Bloomberg spent over $500 million of his own fortune in a quixotic bid for the presidency that collapsed in stunning fashion on Super Tuesday, when he won just one U.S. territory, American Samoa. By Wednesday morning, he quit the race and endorsed former Vice President Joe Biden, saying his continued presence in the rapidly shrinking field would make it harder for the party to defeat Republican President Donald Trump in November, his ultimate priority.

The businessman, worth an estimated $61 billion, pledged to keep spending to defeat Trump. Story continues below advertisement. 2020 Democratic Party presidential primaries. Selection of the Democratic Party nominee for President of the United States in 2020 Independent of the result of primaries and caucuses, the Democratic Party will, from its group of party leaders and elected officials, also appoint 771[b] unpledged delegates (superdelegates) to participate in its national convention.

In contrast to all previous election cycles since superdelegates were introduced in 1984, superdelegates will no longer have the right to cast decisive votes at the convention's first ballot for the presidential nomination. They will be allowed to cast non-decisive votes if a candidate has clinched the nomination before the first ballot, or decisive votes on subsequent ballots in a contested convention.[4][5][6] Overall, there were 29 major Democratic presidential candidates in the 2020 election.

Super Tuesday. Tuesdays early in a US presidential primary season when the greatest number of states hold primary elections Sign for a polling station in English, Spanish (using an incorrect word for "precinct"), Vietnamese and Chinese in Houston, Texas, 2016 The particular states holding primaries on Super Tuesday have varied from year to year because each state selects its election day separately. Tuesday is the traditional day for elections in the United States.

Bloomberg hired Texas Democratic Party Vice Chair Carla Brailey as a senior adviser to his campaign in December, and he hired California State Democratic Party Vice Chair Alexandra Rooker for a similar role in January. Both Brailey and Rooker are superdelegates who will likely vote for the Democratic presidential nominee at the party’s national convention this summer. Hiring the leadership of a state party doesn’t appear to break any campaign laws, but it indicates Bloomberg’s intent to effectively purchase political support, said Brendan Fischer, the federal reform program director at the Campaign Legal Center. Influence at the DNC: More than 60 superdelegates are registered lobbyists. Superdelegate. No, Not Sanders, Not Ever. Bloomberg in 2013: Civil libertarians and teachers union are like NRA ‘extremists’ The Socialist Evolution of Bernie Sanders.

Executive (government) John Lewis (civil rights leader) Lisa Fritsch. John Kerry military service controversy. Would a Wealth Tax Destroy Itself? Join Stacey Abrams: Keep Up The Fight For Georgia. George T. Conway III. Federalist Society. Kamala Harris Says She’s Still ‘in This Fight,’ but Out of the 2020 Race. Free speech has failed us. I Was Once a Socialist. Then I Saw How It Worked. As Amazon drops New York City project, progressives claim a major coup. Carmel Offie. Episode 16: Peace, The Norm. War, The Exception. — None Of The Above.