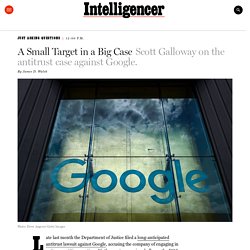 It’s the most aggressive challenge the DOJ has made against a tech giant since it accused Microsoft of anti-competitive practices in 1997. YouTube Refused To Share Russian Disinformation Tactics With Senate. Pando. What does Google want with DeepMind? Here are three clues. All eyes turned to London this week, as Google announced its latest acquisition in the form of DeepMind, a company that specialises in artificial intelligence technologies. The £400m pricetag paid by Google and the reported battle with Facebook to win the company over indicate that this is a firm well worth backing. Although solid information is thin on the ground, you can get an idea of what the purchase might be leading to, if you know where to look.

Clue 1: what does Google already know? Google has always been active in artificial intelligence and relies on the process for many of its projects. Just consider the “driver” behind its driverless cars, the speech recognition system in Google Glass, or the way its search engine predicts what we might search for after just a couple of keystrokes. Acquiring a company such as DeepMind therefore seems like a natural step. Google People Operations: The secrets of the world’s most scientific human resources department. Courtesy Google. 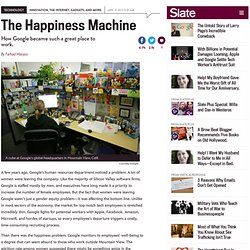 A few years ago, Google’s human resources department noticed a problem: A lot of women were leaving the company. Like the majority of Silicon Valley software firms, Google is staffed mostly by men, and executives have long made it a priority to increase the number of female employees. But the fact that women were leaving Google wasn’t just a gender equity problem—it was affecting the bottom line.

Unlike in most sectors of the economy, the market for top-notch tech employees is stretched incredibly thin. Google to Reorganize in Move to Keep Its Lead as an Innovator. “We’ve long believed that over time companies tend to get comfortable doing the same thing, just making incremental changes,” Mr. 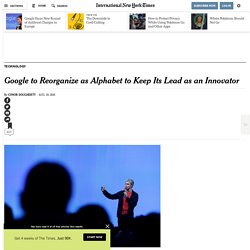 Page wrote. “But in the technology industry, where revolutionary ideas drive the next big growth areas, you need to be a bit uncomfortable to stay relevant.” A holding company structure also gives Mr. Page and Mr. Brin, who became multibillionaires when Google went public in 2004, room to make big new bets to add to Alphabet’s portfolio — without annoying Wall Street. The holding-company structure is set to provide more financial transparency. Colin Gillis, an analyst at BGC Financial, said the reorganization laid a foundation for making further disclosures later, such as unveiling results for YouTube — which has become a driver of the company’s advertising business — or a better sense of how much money is being spent on initiatives like drones. “How much money are they wasting or investing outside of their core?” Last October, he gave Mr. Mr. Yes, Google works with “former military operations people.” But they won’t tell us who, or from where. 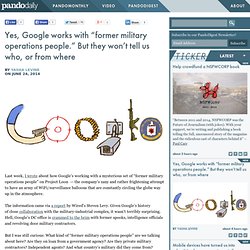 Google's Philosopher: Tech and the Nature of Identity. One day this past September, Google’s executive chairman, Eric Schmidt, sat down with a group of experts in Madrid to begin publicly discussing how Google should respond to a recent, perplexing ruling by the European Union’s Court of Justice. 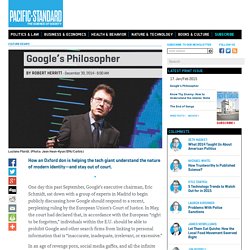 In May, the court had declared that, in accordance with the European “right to be forgotten,” individuals within the E.U. should be able to prohibit Google and other search firms from linking to personal information that is “inaccurate, inadequate, irrelevant, or excessive.” In an age of revenge porn, social media gaffes, and all the infinite varieties of embarrassment that can attend one’s name in a Google search, the ruling was, in spirit, an attempt to keep ordinary Europeans from being unduly tyrannized by an Internet that, famously, never forgets. The court’s judgment has provoked no shortage of criticism, with many seeing it as an assault on press freedom, the freedom of speech, and the Internet as we now know it.

Luciano Floridi. Google Effectively Kills '20 Percent Time,' The Perk That Gave Us Gmail: Quartz. Quartz: Google’s “20% time,” which allows employees to take one day a week to work on side projects, effectively no longer exists. 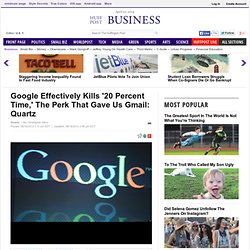 That’s according to former Google employees, one who spoke to Quartz on the condition of anonymity and others who have said it publicly. What happened to the company’s most famous and most imitated perk? For many employees, it has become too difficult to take time off from their day jobs to work on independent projects. More On Quartz: -- The complete guide to getting into an economics PhD program -- More women are leaning in—and not getting paid for it -- Boeing’s secret plan to use robots to bring manufacturing back to the US -- Google is preparing for screenless computers This is a strategic shift for Google that has implications for how the company stays competitive, yet there has never been an official acknowledgement by Google management that the policy is moribund.

Once a pillar of innovation at Google, now verboten You can read Quartz's full update here. Amazon's hachette job evokes George Orwell in ebook price fight. In what is fast becoming a regular negotiating tactic, Amazon has halted pre-orders of DVDs and Blue-Ray discs of some Disney movies. 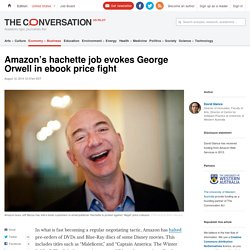 This includes titles such as “Maleficent,” and “Captain America: The Winter Soldier”. The fight between Amazon and Disney however is really about contractual terms and follows a similar disagreement with Warner Brothers earlier this year where it stopped pre-orders of “The Lego Movie” and other titles. The aggressive approach to negotiating terms with its partners has been honed by Amazon through its ongoing, and increasingly bitter dispute with book publisher Hachette over the price Amazon wants to charge for eBooks. Amazon argues against collusion According to Amazon, it is acting in the interests of the consumer and authors in its argument with Hachette. Amazon argues book economics Amazon’s letter tries another approach at justifying its argument for lower eBook prices. Does punishing authors and consumers really show they care?