Why you should hire a moral philosopher — Quartz at Work. Oil and water are, famously, not great mixers. 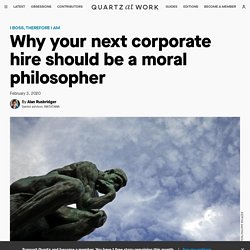 Nor, it seems, are oil and theatre, which became apparent when the Royal Shakespeare Company announced it would no longer take sponsorship money from oil mammoth BP. Shortly after, the company severed its relationship with Shell. What the theatre’s namesake would have made of all this—like most things to do with the clouded life of the playwright—is difficult to know. As well as being a writer and actor, Shakespeare was a skilled entrepreneur, developing profit-share schemes, patronizing the wealthy and their institutions, and negotiating commissions (or “sponsorships” as we call them today) to underwrite his work. Huawei says it will 'never' go back to using Google apps on its phones [Update: Actually, not true] Source: Android Central Update: Turns out that what one Huawei executive said doesn't represent the whole company's views. 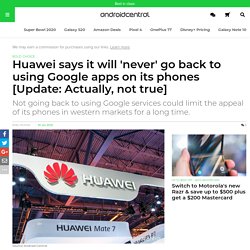 After this story came out, the company released a statement to Android Central walking back Wanfei's comments: Fait dÃ©sormais partie dâVerizon Media. (Bloomberg) -- A key slice of the U.S. yield curve inverted on Thursday for the first time since October, reviving memories of growth fears that plagued investors last year and signaling doubts that the Federal Reserve will succeed in reviving inflation. 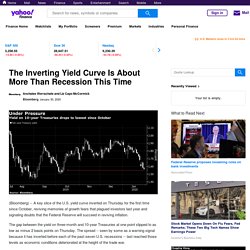 The gap between the yield on three-month and 10-year Treasuries at one point slipped to as low as minus 2 basis points on Thursday. The spread -- seen by some as a warning signal because it has inverted before each of the past seven U.S. recessions -- last reached those levels as economic conditions deteriorated at the height of the trade war. With the coronavirus outbreak threatening to disrupt the Chinese economy, concerns about the business cycle are undoubtedly a factor.

But more important still are emerging doubts over the ability and commitment of policy makers to shore up growth and spur inflation. Harvard Business School professor shares 4 tips to find your 'edge' Whether it’s getting that promotion, that raise or a new opportunity, success hinges not only on how hard you work and your strengths, but also on how others see you. 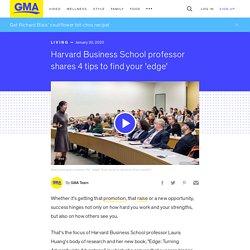 That's the focus of Harvard Business School professor Laura Huang's body of research and her new book, "Edge: Turning Adversity into Advantage," in which she argues that success hinges on your ability to shape others' perceptions of you -- your strengths and also your flaws. Huang, who has been studying bias and stereotypes for over a decade, says the key is learning how to flip those negative perceptions to your advantage, which she's dubbed finding your "edge. " Ink Electronic ink flexible foldable display. Flexible-technology. For an end customer, a flexible display has several benefits outside of the flexibility of the display itself. 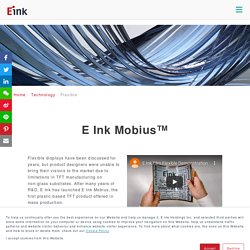 Plastic-based TFTs allow the end product to be substantially lighter and thinner than products using glass-based TFTs. Warren Buffett Sells More Than 30 Local Newspapers For $140 Million. The Oracle of Omaha is quitting the news business. 2017 Taylor Hill/FilmMagic Topline: Billionaire investor Warren Buffett is giving up on newspapers, announcing on Wednesday that he has agreed to sell Berkshire Hathaway’s portfolio of 31 local papers to publisher Lee Enterprises for $140 million in cash. 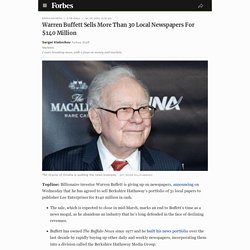 Warren-buffetts-berkshire-hathaway-to-sell-newspaper-business-for-140-million. Warren Buffett’s Berkshire Hathaway is leaving the newspaper business and selling its operations to publisher Lee Enterprises for $140 million in cash. 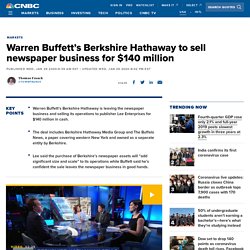 The deal includes Berkshire Hathaway Media Group and The Buffalo News, a paper covering western New York and owned as a separate entity by Berkshire. Lee said the purchase of Berkshire’s newspaper assets will “add significant size and scale” to its operations, lift its portfolio of daily newspapers to 81 from 50 and nearly double its audience. In a statement released with Lee’s announcement, Buffett said: “My partner Charlie Munger and I have known and admired the Lee organization for over 40 years.

They have delivered exceptional performance managing BH Media’s newspapers and continue to outpace the industry in digital market share and revenue.” Warren Buffett is selling his newspapers for $140 million — a fraction of what they cost him. REUTERS/Rick Wilking Warren Buffett is selling his newspaper business to Lee Enterprises for $140 million.Lee has managed Berkshire Hathaway's newspapers since 2018.Buffett bought 28 papers for $344 million in the early 2010s.He's also selling The Buffalo News, which he acquired for about $36 million in 1977.Visit Business Insider's homepage for more stories. 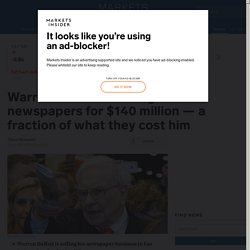 Warren Buffett is selling his newspaper business for $140 million — a fraction of the $344 million he spent acquiring 28 daily papers less than a decade ago. Vietnam Business Operations and the Coronavirus: Updates. This article will be updated as further developments in Vietnam become available. 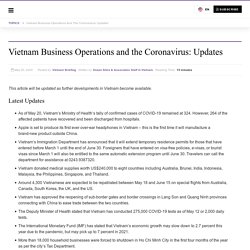 Latest Updates As of May 20, Vietnam’s Ministry of Health’s tally of confirmed cases of COVID-19 remained at 324. However, 264 of the affected patients have recovered and been discharged from hospitals. Apple is set to produce its first ever over-ear headphones in Vietnam – this is the first time it will manufacture a brand-new product outside China.Vietnam’s Immigration Department has announced that it will extend temporary residence permits for those that have entered before March 1 until the end of June 30. Farmers protest in Costa Rica asking for debt relief – The Tico Times. About 200 Costa Rican agricultural producers protested Monday with tractors in front of the headquarters of the Ministry of Agriculture and Livestock to demand greater government support for the sector, which claims to be burdened by debts. 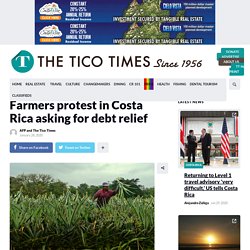 Farmer Jorge Oviedo told reporters that they went to ask the Minister of Agriculture, Renato Alvarado, to support a bill under discussion in the Legislative Assembly that aims to help indebted producers. He explained that the project provides for an economic rescue of farmers with debts along with actions to revive agricultural production. Countdown to recession: What an inverted yield curve means. The Woman Shaking Up the Diamond Industry. People have been trading diamonds for more than two millennia. From at least the third century B.C., Indian merchants bought and sold diamonds that washed up in riverbeds, most likely as tools for cutting other gems. Brexit: US 'wants to reach trade deal with UK this year' Image copyright Steve Mnuchin The US wants to agree a post-Brexit trade deal with the UK this year, the country's treasury secretary has said.

After meeting Chancellor Sajid Javid in London, Steve Mnuchin said he believed the UK could negotiate trade deals with the US and EU at the same time. "I'm quite optimistic," he told a Chatham House think tank event. After Brexit happens on 31 January, the UK will be free to negotiate and sign new trade deals with countries with no existing EU deals - like the US. At the same time, the UK will also be negotiating a free trade deal with the EU to ensure that UK goods are not subject to tariffs and other trade barriers once the Brexit transition period ends on 31 December. So Long, California? Goodbye, Texas? Taxpayers Decide Some States Aren’t Worth It. Why the UK must implement an integrated study visa.

The reintroduction of the two-year post-study work visa for the 2020/21 university intake will see the UK regain its lost market share after years of anti-international student rhetoric, boosting our economy and helping universities that are struggling financially. Yet while this policy change from Boris Johnson has rightly received strong commendation from the sector, international students still face problems with the UK visa system before and during their studies. With its world-class universities, the UK has always been a highly sought after destination for international students. In India, in particular, there was huge demand for the country’s higher education institutions. This was until 2012, when then home secretary Theresa May revoked the two-year post-study work visa, resulting in a 40 per cent drop in the number of Indian student enrolments. Current situation. Clayton Christensen, renowned Harvard Business School professor, dies at 67. The theory described the way startups or their products can overthrow a longstanding legacy company.

Or, in his words, the process “by which a product or service takes root initially in simple applications at the bottom of a market and then relentlessly moves up market, eventually displacing established competitors,” according to his website. Get Talking Points in your inboxAn afternoon recap of the day's most important business news, delivered Monday through Friday. Essentially, industry leaders are blinded by huge profit margins from their higher-end products, and the new producers continue to improve the cheaper products and expand their market share, eventually upending the market. Antarctica: the battle to own the world’s forgotten continent. U.S. Business Activity Increases in Early 2020. Chinese economic growth hits three-decade low - Business.

China's economy grew last year at its slowest pace in three decades, hit by weak domestic demand and trade tensions, but while officials warned of further headwinds, separate figures Friday suggest the downward trend is bottoming out. The 6.1 percent rate is a sharp drop from the 6.6 percent the year before and marks the third straight drop, though it met the government's target and analysts said leaders were unlikely to open up the stimulus taps just yet. More precious than gold: Why the metal palladium is soaring. Image copyright Getty Images. How Angola's state oil firm was left with just $309 in its account.

What billionaires said about wealth inequality and capitalism in 2019. 2019 was the year many asked the question: Should billionaires exist? Income inequality in the United States is at its highest level in at least 50 years, according to one measurement from the government’s Census Bureau. TechCrunch fait dÃ©sormais partie dâVerizon Media. As Amazon and Walmart-owned Flipkart spend billions to make a dent in India’s retail market and reel from recent regulatory hurdles, the two companies have stumbled upon a new challenge: Mukesh Ambani, Asia’s richest man. Goldman Sachs is saying the economy is nearly recession-proof. Just months after almost everyone on Wall Street worried that a recession was just around the corner, Goldman Sachs said a downturn is unlikely over the next several years. In fact, the firm’s economists stopped just short of saying that the U.S. economy is recession-proof.

An analysis Goldman conducted of the current potential risks to growth show that they are mostly muted. Microsoft's wins, fails, and WTF moments of 2019. The Fed seems to have halted a potential crisis in the repo market. The Federal Reserve is closing out 2019 seemingly in control, at least for the moment, of a problem that only a few months ago threatened to spiral into a crisis. Issues in the overnight lending market, where banks go to fund their operations, caused short-term borrowing rates to spike briefly in mid-September. More importantly, they raised concerns over whether the Fed’s attempts to stage manage its escape from the extraordinary measures it took during and after the financial crisis were running awry. Despite concerns that those earlier issues would crop up again as the year came to a close and a liquidity crunch would erupt again, the funding market, known as repo, seems to be running smoothly. India Lost Its Hype Amid Banking Crisis, Monetary Policy Missteps.

"Yes," Musk said when asked whether he didn't require potential employees to have a college degree.In a 2014 interview, Musk said he looked for "evidence of exceptional ability" in a potential employee, rather than a degree from a prestigious university. " What is the future of investing in emerging markets? Sali Hughes's 40 best sustainable beauty brands.